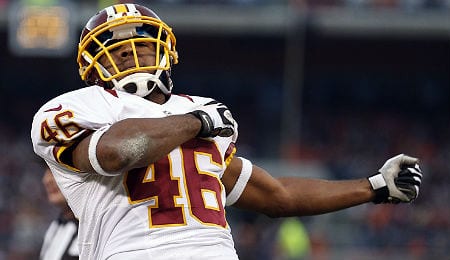 Alfred Morris could set a YPC record for the Redskins this season. (Rick Osentoski/Associated Press)

By now your team is like a forcemeat terrine — it’s stacked and robust. After all, it’s championship week and we assume since you are a loyal RotoRob.com reader that you are still alive and kicking. Whether you are smoked or salted like fine charcuterie, you understand the curing process of adding depth. We can probably gather that your bench is pretty solid, but injures are a reality and with them opportunity is bred. You are about to set your most important lineup of the season, so let us help you. Here are our delicious and meaty Start ’em, Sit ’em picks for Week 16.

Matt Ryan, QB, Atlanta Falcons @ NOR: The entire WR corps should be finally firing on all cylinders Sunday at New Orleans. The division is still at stake and, frankly, the Saints have failed to put together back-to-back solid games. Ryan should approach 300 yards passing and two or three TD passes is reasonable in this likely high scoring affair. We also think he’ll avoid the fate he suffered in the virtual world (see video below).

Alfred Morris, RB, Washington Redskins vs. PHI: In the past Morris and QB Robert Griffin III have fed off each other. Now Head Coach Jay Gruden seems somewhat committed to helping Griffin learn. A healthy dose of Morris left and Morris right would make anyone feel comfortable. With change of pacer Roy Helu questionable, Fantasy owners should feel comfortable with Morris too. We know you drafted Morris high… now stick to your guns.

Fred Jackson, RB, Buffalo Bills @ OAK: You might roll your eyes when we say Jackson is a poor man’s Jamaal Charles. Yet his consistency is as potent as a Buffalo snowstorm. Did we mention Jackson is playing Oakland? If you are not an F-Jax fan then shame on you and let us introduce you to this new concept called PPR. Jackson may bare the PPR torch for eternity since the birth of such an era has made him an ace up many sleeves. He might not explode for two TDs but he will never lay an egg.

Malcolm Floyd, WR, San Diego Chargers @ SF: We always knew Floyd was quality WR. Injuries have thwarted him in every season until this one — in which he is averaging 17.3 yards per reception. Now fellow WR Keenan Allen is done for the year. Floyd’s role should increase, which might hurt his average, but a TD seems very likely for this veteran with underrated athletic skills.

Larry Fitzgerald, WR, Arizona Cardinals vs. SEA: Fitzgerald is facing the number one pass defense and he’ll have to do it with his number three quarterback, a combination to ignore — especially in your Super Bowl.

Dez Bryant, WR, Dallas Cowboys vs. IND: You have made it this far with Bryant, however his Week 16 match-up against the Indianapolis Colts and possibly this year’s best cornerback — Vontae Davis — spells trouble for your starting lineup. As hard as it is to bench Bryant, this is the time to do so if you want to win your Super Bowl.

Jeremy Hill, RB, Cincinnati Bengals vs. DEN: Hill is coming off a great game against the Browns and before that he had two sub-par games. The Week 16 match-up pits him versus the number two rush defense in the NFL. In addition to the Broncos excellent run defense, they have also taken a new approach lately playing a more ball control style offense that keeps their opponents offense on the sideline longer. Hill may have helped you get in the Super Bowl, but he won’t help you win it.

Jarvis Landry, WR, Miami Dolphins vs. MIN: Landry could be a hit or miss in Week 16… it really all depends on who Xavier Rhodes is covering. Rhodes has been a true shutdown corner this year and if he gets Landry as his assignment, then Landry needs to be on your bench. Currently, all indications are that Rhodes will be covering Landry, so plan accordingly.

Now it’s your turn. Let us know in the comments below who you plan to start and sit this weekend.