The Wire Troll: Antoine Vermette Leads the Pack in Arizona 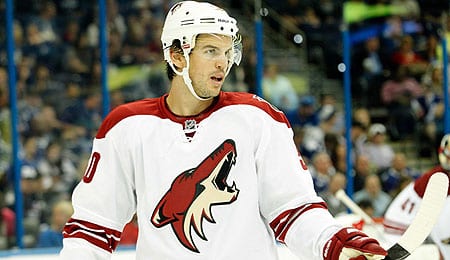 Antoine Vermette is tearing it up this month. (USATSI)

With about 10 games left in the regular season, it’s playoff time in Fantasy hockey leagues. That means a savvy waiver wire pick up could be the difference between advancing or hitting the proverbial links. While we’re not going to guarantee you a championship, we promise to provide you with some of the best candidates most likely available in free agency.

Antoine Vermette, C, Arizona Coyotes (ESPN: 24.6 per cent; CBS: 13 per cent): Vermette’s overall numbers are far from impressive this season, but he may be the hottest player in the NHL for the month of March. In his last six games, the Stanley Cup champion has five goals, 10 points, a plus-6 rating, six penalty minutes, two power play goals, 13 shots on goal, a hit and three blocks. Vermette’s golden run has caught the attention of many, and has made him the seventh hottest commodity on ESPN’s Fantasy waiver wire.

He has 15 goals, 34 points, a minus-14 rating, 60 penalty minutes and 109 shots on goal in 64 games played this season. Yes, Vermette’s numbers have seen a massive boost thanks to recent production, but he’s the man for the job at this make-or-break point of your Fantasy season. And, yes, he gives good quote (see video below).

Mikael Backlund, C, Calgary Flames (ESPN: 36.3 per cent; CBS: 18 per cent): A more defensively responsible option than Vermette, Backlund has also been on a roll lately with thee goals, seven points, a plus-5 rating, two penalty minutes, 19 shots on goal, two hits and a blocked shot in his last seven games. Backlund has 15 goals, 39 points, a plus-9 rating, 22 penalty minutes and 137 shots on goal in 71 games played.

Jakob Silfverberg, LW/RW, Anaheim Ducks (ESPN: 19.5 per cent; CBS: 30 per cent): After an abysmal alpha, Anaheim — okay, we’re running out of words that start with “A” — long story short, the Ducks have taken off and look to be in the postseason for the long haul. Silfverberg has been a big contributor in recent games, collecting four goals, seven points, a plus-5 rating, two penalty minutes, two power play goals, 21 shots on goal, 10 hits and four blocks in his past seven games. He has just 28 points on the season, meaning he’s piled up a quarter of those points in the past 15 days, but keep your eyes on him if he continues to find the score sheet.

Greg Pateryn, D, Montreal Canadiens (ESPN: unowned; CBS: unowned): Here’s a sleeper for you. With Habs’ defenders dropping like flies left and right, Pateryn is seeing quality time in Montreal’s top four. In his last six games, the rugged rear guard has a goal, three points, a minus-2 rating, nine penalty minutes, eight shots on goal, 15 hits and 10 blocked shots. Pateryn has just four points and a minus-10 rating in 27 games played this season, but his 30 penalty minutes indicate he’ll contribute more to your team that just points. He’s worth a flyer for sure.

Jonathan Bernier, G, Toronto Maple Leafs (ESPN: 16.5 per cent; CBS: 26 per cent): Toronto is in a dizzying spiral, but there is a bright spot in the form of goaltender Bernier. Though his season totals may still be atrocious, signs are pointing to an upswing for the once highly touted man behind the mask. In his last four starts, Bernier has two wins, a 1.53 goals against average and a .952 save percentage. Buy low, but you might want to do it now if your team still has a shot at the title.

Fantasy Tip of the Week: His ownership numbers were just a tad too high for the Troll, but it would be wise to keep tabs on Arizona Coyotes goaltender Mike Smith all the same. In two appearances since returning from injury, Arizona’s franchise netminder has two wins, a 0.50 goals against average and a .986 save percentage. Still, the big goalie has been known to be one of two extremes: either really good or really bad, so be cautious.