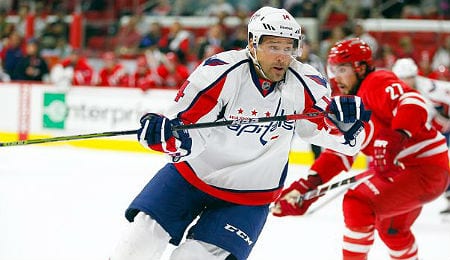 We’ve wrapped up the defensemen, Part One of the forwards and the goalies, so today we head back to the forwards, with Part Two.

The Contract: Two years, $6.5 million with the Washington Capitals.

Analysis: We really thought some team was going to fork over a contract of four or more years to Williams, so we’re really surprised at how short of a term the Capitals got him for. We think this is great value for the Capitals and they didn’t have to break the bank. Williams will surely help in the Capitals’ playoff run (check out the video below for a sense of his legendary postseason heroics) and can add some much needed secondary scoring.

Fantasy Impact: First of all, we don’t think Williams should be considered a key Fantasy contributor. In the last two seasons, he’s barely hit 40 points and given that he’s now 33, we don’t see that improving much. Williams might provide better real-world value than Fantasy value now. In order for him to hit even 50 points, three things would need to happen: he would need top power play time, he would need to improve his shot output, and he would need a steady top six spot.

Williams might be able to hold down a top six spot, but we’re not confident he’ll improve on his recent shot totals. Two seasons ago, he took 239 shots and last season he took 174. Our estimate for this season is that Williams winds up with around 160 shots. And while there’s a slight chance he gets power play time on the first unit, we don’t see it happening often. Last season, the Capitals usually ran the power play featuring Nicklas Backstrom, Troy Brouwer, Marcus Johansson and Alex Ovechkin.

If newcomer T.J. Oshie takes Brouwer’s spot, then Williams will start on the second unit. The only real plus Williams receives going to the Capitals from the Kings is that L.A. was more defensive and less offensive than Washington. Even so, we expect more of the same from him, so reaching even 50 points seems very unlikely.

The Contract: One year, $1.05 million with the Nashville Predators.

Analysis: Considering that in the previous two seasons before 2014-15, Hodgson scored 78 points in 120 games and he is only 25, we think any team would have been smart to give him a cheap, one year deal. Nashville gets a young forward with potential and Hodgson goes to a team in need of talent where he can have a shot at a top six role.

Fantasy Impact: We like Hodgson and think he has great offensive potential, but can’t speak about his defensive abilities because no self-respecting person would ever watch a Sabres’ game. Not taking his defensive liabilities (if any) into account, we think he can produce a substantial amount of points. Just three years ago, Hodgson was able to put up 34 points in 48 games on a terrible Buffalo team and he followed that up with 44 points in 72 games.

We think that if he gets enough ice time and power play time, he can crack 40 points this season. Below is a table of Hodgson’s PT and production over the last three seasons. In the first two seasons, which were his most productive, he played over 18 minutes a game and was able to score at a 50-point pace. But, when Hodgson’s ice time dropped below 13 minutes, his point total plummetted.

As we mentioned, we don’t know a whole lot about his defensive game and whether or not he should be in a top six spot but from what we see, if the Predators give him enough time, he can be a factor.

However, that’s a pretty big if. Nashville is just as likely to play him on the fourth line and limit his minutes if his defensive game isn’t up to snuff. The way we see it, if Hodgson is given a top six spot every once in a while, he might be able to produce but there’s a good chance he won’t get it.

Projection: This may be cheating, but we’re going to throw out two different predictions based on different scenarios.

Scenario One: Hodgson mostly gets to play within the top six or nine, but barely plays on the fourth line. Under this scenario, we project 18 goals, 23 assists, +4, 20 penalty minutes and 158 shots in 78 games (there’s a 20 per cent chance this happens).

Scenario Two: He plays on the fourth line and occasionally plays on the third line. Under his scenario, we project eight goals, 11 assists, -3, 24 penalty minutes and 130 shots in 76 games (there’s an 80 per cent chance this happens).

The Contract: Two years, $7.5 million with the Arizona Coyotes.

Analysis: We think this signing was very good for both the Coyotes and Vermette. He gets to be put in advantageous positions and the Coyotes will benefit from his leadership to help the rookies.

Fantasy Impact: Now that Vermette’s back in the desert, he will probably be put in a better scoring role than he would have on a different team. On Chicago, he only managed three assists in 19 games, while on Arizona, he scored 35 points in 63 games — a 45-point pace over a full season. Assuming Vermette declines somewhat with age and receives less ice time because of more prospects coming up, he will probably post fewer points than last season, but it could still be a decent amount.

Now it’s your turn. Let us know which free agent forwards you’ll be keeping your eye on this season.