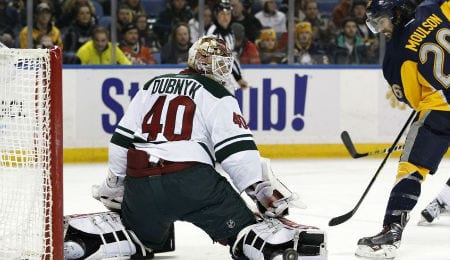 Devan Dubnyk has been a steal for the Wild so far. (Kevin Hoffman-USA Today Sports)

Quick note for you daily Fantasy hockey players: The Flyers only play twice this week, but strangely they go back-to-back on Monday and Tuesday so if you’re planning on using studs Jakub Voracek and/or Claude Giroux in DFS formats this week, we’re all in Monday against the Isles, but recommend avoiding the pair Tuesday against the much tougher defensively Penguins.

Devan Dubnyk, G, Minnesota Wild (ESPN: 25.5 per cent; CBS: 44 per cent): The 14th overall pick in the 2004 NHL Entry Draft, Dubnyk spent years plying his trade with the Edmonton Oilers. He quickly learned goaltending alone wouldn’t fix the club, and was finally traded last season to the Nashville Predators. After a poor two appearances with the Preds, Dubnyk would then be traded to Montreal and finished the season with the historic franchise’s farm team.

This season, things are different for the big (6’6″, 210 pounds) goalie after earning a role with the Arizona Coyotes. With Mike Smith easily struggling through his worst season to date — arguably the worst of any NHL starter this season — Dubnyk stepped in beautifully, posting a 9-5-2 record, a 2.72 goals against average, a .916 save percentage and one shutout in 19 appearances. However, with Smith signed to a long-term deal and the franchise still believing he’s the club’s answer in net, “Doobie” was expendable, and Minnesota snatched him up at the inexpensive price of a 2015 third round pick.

While Dubnyk was blindsided by the trade (see video below), he’s adapted well.

Two games in, all signs are pointing to a heckuva steal for Wild GM Chuck Fletcher, who may be looking at the rest of this season as an audition for next year’s starting role. With Niklas Backstrom likely to be bought out this summer, and youngster Darcy Kuemper locked in for one more season, Dubnyk has a real shot at claiming it if he does choose to re-up with Minnesota in the offseason. In the meantime, Fantasy owners should pick Dubnyk off waivers immediately. With a solid defense in front of him, he could easily be on track for his best season yet.

If you need any more proof, how does two wins, a 0.50 goals against average, a .977 save percentage and a shutout since joining the Wild sound? That’s what we thought.

Patrick Maroon, LW, Anaheim Ducks (ESPN: 2.0 per cent; CBS: 18 per cent): Maroon is enjoying a surprisingly decent season with the Ducks. In Week 14, he managed to collect a goal, five points, a plus-6 rating, five penalty minutes, a plus-1 rating, 11 shots on goal, a face-off won and six hits. Through 38 games played, he has three goals, 21 points and a minus-1 rating.

Benoit Pouliot, LW, Edmonton Oilers (ESPN: 4.8 per cent; CBS: 8 per cent): For a guy that only has 15 points through 28 games, five goals, a plus-1 rating, six penalty minutes, two power play points, a shorthanded point, 10 shots on goal and nine hits in Week 14 is pretty impressive. Pouliot could be one to target in leagues with shallower free agent pools.

Zach Bogosian, D, Winnipeg Jets (ESPN: 9.3 per cent; CBS: 29 per cent): Since making his return from a lower-body injury, Bogosian has been a force to be reckoned with. One of a few Jets defenders coming back from health woes, he had two goals, four points, a plus-7 rating, a power play point, seven shots on goal, 11 hits and four blocked shots last week. And we thought Winnipeg was dangerous enough without any of its top four rearguards in the lineup. Yeesh.

Rickard Rakell, C, Anaheim Ducks (ESPN: 0.6 per cent; CBS: 5 per cent): This young guy could be a long shot, but he’s shown signs of improvement over last week. In Week 14, Rakell collected two goals, five points, a plus-2 rating, two power play points, six shots on goal, 27 face-offs won, three hits and a blocked shot. Still, he only has three goals and 13 points through 35 games. We suggest you wait to snatch him up, but keep your eyes open for any more signs that he could be coming around.

“Studs and Duds” is our weekly segment about who was hot and who was not in Fantasy hockey in the previous week. Fortunately for Dallas Stars netminder Kari Lehtonen, it appears he’s finally escaped the clutches of the RotoRob.com “Studs and Duds Role Reversal Curse”. Oh well, it was fun while it lasted.

No. 1. Ryan Miller, G, Vancouver Canucks: There is literally no other way for an NHL player to have a more perfect week than the Canucks’ Miller. The former U.S. Olympic silver medalist stopped all 58 shots faced on the week for two shutout victories. Not bad at all.

No. 3. Mathieu Perreault, C, Winnipeg Jets: It was a pretty ordinary week for Perreault – you know, aside from a four-goal outburst in an 8-2 clobbering of the Florida Panthers. In four games, he had four goals, six points, a plus-6 rating, two penalty minutes, a power play point, 15 shots on goal, 17 face-offs won, six hits and three blocks.

No. 1. Niklas Backstrom, G, Minnesota Wild: It has been a long time since Backstrom was considered a reliable goaltending option both in Fantasy hockey and real life. In two appearances in Week 14, the Finn allowed 10 goals for a 5.42 goals against average and an .857 save percentage.

No. 2. Ben Scrivens, G, Edmonton Oilers: Edmonton can have all the superstar forwards it wants, but the team won’t win without defense. Without a stout blueline, Oilers’ goaltenders are left out to dry, and there’s no question Scrivens has been a victim of it. In three games last week, he collected a 3.77 goals against average and an .853 save percentage.

No. 3. Jhonas Enroth, G, Buffalo Sabres: Enroth played just one game in Week 14, and while he showed signs of being a solid netminder… he’s playing for the Sabres. As such, he got roasted for seven goals against and an .811 save percentage in a much-needed confidence boost for the Wild. Still, he’s got a surprisingly good glove, making us wonder what he might do for a team in a better situation.