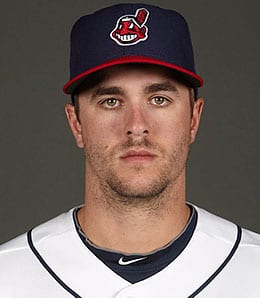 Lonnie Chisenhall is playing like he wants to stick with The Tribe this time.

With Tim popping pain killers like gummy bears after his MCL surgery, the Wire Troll is a joint effort this week. In fact, we think that’s exactly what Tim needs right now. A really big joint, a beanbag chair and some Moody Blues.

While you ponder that image, here are this week’s Fantasy baseball waiver wire picks:

Lonnie Chisenhall, 3B, Cleveland Indians (CBS: 21 per cent owned, ESPN: 5 per cent): Jack Hannahan was out almost two weeks with a back injury, returned last Sunday and promptly strained his calf, finally landing on the DL. Enter Chisenhall, our 27th-ranked prospect in 2011 that graduated from the list this year. Although his strike zone judgment actually regressed this season, Chisenhall was enjoying a breakthrough season at Triple-A with a whopping 60 total bases in just 28 games. He has no speed, and is yet another left-handed stick for Cleveland’s predominantly lefty lineup (which tends to struggle against southpaws), but Chisenhall has done extremely well in his first few games since the recall, so don’t overlook the fact that Hannahan may very easily be Pipped here.

Homer Bailey, SP, Cincinnati Reds (CBS: 64 per cent owned, ESPN: 16 per cent): Bailey’s been an extremely popular waiver pick in the past week, jumping from 27 to 64 per cent ownership in CBS leagues. Yes, once again, he’s back to tease us into submission. In his past four starts, Bailey has allowed a total of seven earned runs and better yet, he’s keeping the walks down (only five in this stretch). Will Bailey ever be the stud we projected him to be back in the day? Probably not. But the way he’s dealing right now, he needs to be owned in all formats.

Jordan Pacheco, 3B, Colorado Rockies (CBS: 20 per cent owned, ESPN: 5 per cent): The Rox have endured an incredible mess at the hot corner but lately Pacheco has stepped it up and proved he’s capable of filling the gap nicely until the eventual arrival of top prospect Nolan Arenado. Now that Chris Nelson is off the DL, he may cut into Pacheco’s PT a bit, but Pacheco’s ability to play almost any infield position (including catcher) should ensure plenty of at-bats.

Roy Oswalt, SP, Texas Rangers (CBS: 64 per cent owned, ESPN: 23 per cent): In the wake of Neftali Feliz’s injury, the Rangers have loaded up and signed Oswalt to a one-year, $5-million dollar deal, a move we discussed in last week’s Podcast. On Saturday, Oswalt tossed two shutout frames at Triple; expect him back in late June once he gets his stamina and pitch count up.

Nate Eovaldi, SP, Los Angeles Dodgers (CBS: 8 per cent owned, ESPN: 1 per cent): Eovaldi took the loss in his first start this season since being recalled from the minors, but easily would have earned the win with a little bit of run support. The 22-year-old righty tossed seven strong innings of four-hit ball, allowing two earned runs and one free pass while fanning four. There’s no timetable for Ted Lilly to return, so Eovaldi could be more than just a temporary fix in the Dodgers rotation.

Andrelton Simmons, SS, Atlanta Braves (CBS: 6 per cent owned, ESPN: 1 per cent): The Tyler Pastornicky experiment is over (for now). Simmons, who has a good glove and nice speed (10-for-12 in stolen base attempts) but no power, has been recalled from Double-A to man shortstop in Hotlanta. In his big league debut Saturday he looked comfortable, and although he took an 0-fer, he was facing Stephen Strasburg, who induces plenty of them out of far more experienced players. Simmons sparkled defensively (unlike Pastornicky), and it’s reasonable to believe that he’ll get plenty of time to adjust offensively.

Stephen Pryor, RP, Seattle Mariners (CBS: 7 per cent owned, ESPN: 1 per cent): The Mariners just recalled Pryor after he made a mockery of both Double-A and Triple-A. Although he served up a solo shot in his debut Saturday, he looked pretty damn impressive otherwise, fanning two in 1 1/3 IP. Can Pryor slide into a closer role that’s been left wide open in Seattle?

Francisco Liriano, SP, Minnesota Twins (CBS: 38 per cent owned, ESPN: 7 per cent): As RotoRob discussed last week, it’s only one in a row, and it was against the offensively challenged A’s, but Liriano sure did look good in his return to the rotation.

Fernando Martinez, OF, Houston Astros (CBS: 2 per cent owned, ESPN: unowned): The former Met top prospect has been rejuvenated since the Astros grabbed him off the waiver wire last winter.

Brad Lincoln, SP, Pittsburgh (CBS: 6 per cent owned, ESPN: 1 per cent): Lincoln looked like an up and comer a couple of years ago, but he fell off the map. He’s pitched very well out of the pen since his recall, and with Jeff Karstens hurting, Lincoln gets a spot start Tuesday and possibly more if Karstens needs more time to recover. Lincoln is an NL-only option right now.

Yasmani Grandal, C, San Diego Padres (CBS: 15 per cent owned, ESPN: unowned): Was Grandal recalled to be an extra bat off the bench until the return of Mark Kotsay or is the top prospect up in an effort to motivate struggling Nick Hundley?

Alex Castellanos, OF, Los Angeles Dodgers (CBS: 3 per cent owned, ESPN: unowned): Matt Kemp came off the DL, but went right back on it with a recurrence of his hamstring injury and will be lost for 4-to-6 weeks. Castellanos, who was scorching at Triple-A, has been recalled, but his stay could be short with Juan Rivera coming off the DL as early as Monday.

By Tim McLeod
This entry was posted on Sunday, June 3rd, 2012 at 2:52 pm and is filed under BASEBALL, RotoRob, The Wire Troll, Tim McLeod. You can follow any responses to this entry through the RSS 2.0 feed. Responses are currently closed, but you can trackback from your own site.