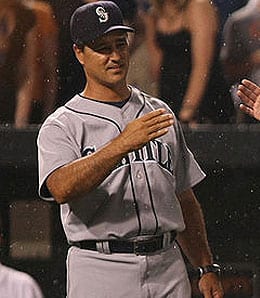 Normally mild-mannered manager Don Wakamatsu went off the rails Thursday, and it worked.

Seattle Manager Don Wakamatsu finally lost his shit Thursday and the Mariners responded, avoiding their 16th loss in the last 19 games in the most unlikely fashion – Ken Griffey, Jr. finally did something worthwhile. The Kid smacked his 10th career game-winning hit, yet I still don’t want him anywhere near my team, unless I’m playing in a super, duper deep AL-only league. Maybe.

After a sluggish start to May, Carl Crawford is heating up, spanking hits in eight of his last nine games (a run that includes four multi-hit efforts) to raise his BA from .301 to .316 just in time for a visit to his hometown Houston this weekend. Expect him to put on a show in front of his friends and family and continue what has been a career year so far. Of course, that Crawford is putting up such sick numbers doesn’t surprise us at all; we had him at the top of our contract year players list.

Need some middle infield help? Well, Felipe Lopez (elbow) returned to the Cardinal lineup earlier this week and he scored a pair of runs Thursday – just the second time this season he’s managed to score multiple times. No, Lopez hasn’t been of much use this season, even before he got hurt, but he put up a solid 2009 campaign and is worth a look at the very least as I believe, batting at the top of the St. Louis lineup, that he’s going to be a factor before long.

While the Cubs have more or less been holding their own lately, with Cincy playing well, they’ve now fallen 4.5 games behind the second place Reds in the NL Central – not where they expected to be as May winds its way down. However, if you’re looking for a bright spot, how about the huge surprise that is Carlos Silva? (And I do mean huge; he’s 250 the way I’m 150.) Somehow, Silva has become the first Cubs righty to start a season at 5-0 since Greg Maddux did it in 2006. More impressively, just two of his eight starts have not been quality outings, his control has been much better, and – gasp – he’s striking out more batters (I mean way more) than ever before. Okay, we’re not talking about a Nolan Ryan impression, but for a dude who has averaged well under 4 Ks/9 in his career, a jump to 5.59 Ks/9 is significant. Fantasy owners are starting to jump on his ship, and why not? And if I owned Silva, I’d be working the phones like a madman, trying to sell high while I could, because you know as sure as a sunrise that Silva isn’t nearly this good and it’s just a matter of time before he falls apart.

It was interesting to see Hall of Famer Steve Carlton ranked among the worst Minnesota Twins ever in Thursday’s post on Randball.com, a Minneapolis-St. Paul Star Tribune blog. As great as Lefty was, it’s hard to quibble with his choice among the lamest Twins ever. By the time he arrived in Minnesota in a mid-season trade in 1987, he was clearly done. He struggled to a 1-5 record with a butt-ugly 6.70 ERA for the remainder of that season before being released in the offseason. Stranger yet, the Twins re-signed him as a free agent a few weeks after releasing him, and low and behold, he was even worse in 1988, going 0-1, with a 16.76 ERA in one start and three relief appearances before Minny cut bait before the end of April. Carlton never pitched again. Talk about going out with a whimper. So I suppose it’s fair that Minnesota fans don’t exactly reserve a spot in their hearts for this particular ex-Twin.

Could the Pirates finally be on the cusp of something special (by special, I mean a non-losing season)? Okay, they’re slumping lately and have fallen five games under .500 to slip to fourth in the NL Central, a half game behind the Cubbies. But look at the talent this team is starting to amass. We already witnessed the incredible impact Andrew McCutchen had as a rookie in 2009, but this year he’s taken it to a whole new level. We expected him to be a top 25 outfielder, but with the numbers he’s put up, he’s probably been a top five flyhawk through the first two months of the season. In fact, despite a current 4-for-19 skid in the last five games, and no steals over his past six, McCutchen still ranks fourth in the NL in batting and second in steals. Oh, and he won’t be 24 until the postseason. But his continued development is not all the Pirates have to look forward to. Soon, Brad Lincoln, Pedro Alvarez, Jose Tabata and Neil Walker (and later, Tony Sanchez) will arrive to inject more young talent into a lineup that has a legitimate chance to break their MLB-record streak of 17 consecutive losing seasons. Maybe.

Over in Pennsylvania’s other baseball city, Philadelphia Phillies reliever David Herndon hasn’t really been as bad as the numbers suggest. He’s only been scored on in three of his 13 appearances, yet sports and ERA over 5.00 and an even uglier WHIP (2.11). The Phils are barely using him these days (just three appearances this month), but are stuck with the Rule 5 pick for the season or else he has to be offered back to the Angels. He’s a real control specialist who pitches to contact, a trait that stead him well at Double-A, but isn’t working quite as well in the Show. Still, the Phils bullpen has been pretty strong this year, so for now, they can afford to keep him around and cherry pick his appearances. Of course, despite recording his first hold recently, Herndon is so far down in the pecking order that his chances of Fantasy relevance are non-existent – even in very, very deep NL-only leagues.

By RotoRob
This entry was posted on Friday, May 21st, 2010 at 7:10 pm and is filed under BASEBALL, Fantasy Notes, RotoRob. You can follow any responses to this entry through the RSS 2.0 feed. You can leave a response, or trackback from your own site.