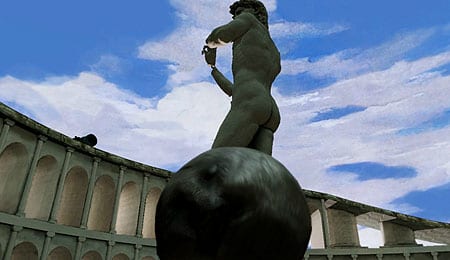 Guess where you’re supposed to hit this guy.

Alright, PlayStation 3 owners: listen up. What once was an Xbox 360 exclusive finally rolls its way to the PlayStation Network for download. Yes, we’re talking about Atlus’ tower-offense ball of insanity, Rock of Ages — and goddammit, no, for the last time, this is not that hit musical with all the hair-band songs from the ’80s! This game is 10 times more ridiculous, has 20 times the boulder-rolling action and is a thousand times more fun than all the stage musicals in existence combined (these aren’t precise numbers, but I’m 95.743 per cent sure that I’m right on this one). Rock on and see what you’ve been missing.

Defend the castle walls, sire! When starting your turn in this gonzo strategy-action title, you’ll need to build various blockades on a playing field to prevent enemy forces from storming over your domain. To do so, open up your asset window with your tools of defense: towers, catapults, bombs and angry livestock are just a small taste of goodies to put into place to slow down and deter your opponent’s attack. After preparing your defenses, trumpets will blare, cuing you to literally roll out your attack.

In Rock of Ages, total territorial domination is acquired by a giant personified rolling stone of doom. Roll the rock toward the enemy’s castle with the left stick, use the right stick to control the camera and press circle or left trigger to make the boulder jump. Guide your stone down perilous tracks, make waste of the enemy’s blockades and pitch that sonuvabitch right at the front door. After your go at the opponent’s castle, it’s their turn to roll their boulder your way. This is when your previous defenses come into play in hopes that your placement strategy slows down their stone to minimize damage to your castle door.

Naturally, all of the smooth ball-rolling action and tower defense strategy from the 360 version translate perfectly for the PS3. The intuitive menus and controls are still intact — in fact, the rolling physics seem to be slightly improved and the controls are a bit tighter. In the later stages, I found it a bit easier to not roll off the cliff as often as I did before. Maybe it’s because I played the previous version so much and I was honed in to the controls. Meh. If that was totally true, I wouldn’t be talking about rolling off any cliffs at all. What I’m trying to say is that there’s some mastery and practice necessary to acing the controls, calling for some old fashioned trial and error.

The Terry Gilliam inspired cardboard cutout animation… the epic pieces of music… the silly canned voice samples… the squishy fart sound when squishing your foes. Ah, yes, it’s all here. All of the ridiculous sights and sounds that define Rock of Ages still deliver a laugh or two. Like a Monty Python intermission come to life, it’s marvelous how the art of different eras gel together throughout the entire game. The layouts of the stages have great architecture and breaking physics of the structures are satisfying as they burst into debris. And in case anyone was wondering, there’s no crazy jump in visual quality from the 360 to PS3 version.

The well-documented history of Sisyphus and his ball-rolling antics through the ages await your discovery. The same Story mode from the 360 version is all here. Speed, strategy and familiarity with the stages’ layout will dictate who delivers maximum castle damage as you and the AI opponent work against each other simultaneously. Progression in the game will unlock better defense items and boulder upgrades that you can purchase with cash earned from your wreckage. The balance of action and tower defense is excellent, and the brisk pacing between boulder runs and defense-building keeps the gameplay fast and fierce. Watching your well-planned deterrents such as giant fans and mammoth-powered towers successfully slow the enemy’s roll while you blissfully tear into their front door is extremely satisfying. With over 20 levels including some nifty boss bottles, gamers are in for a beefy campaign.

The other modes and extras are where the PS3 gets some brownie points. The online and local War mode (a simple head-to-head match) comes with all of the unlockable assets, boulder skins and avatars ready to go the moment you fire up the game. Time Trial and SkeeBoulder mode also make a return with full leaderboard support. New and exclusive to this new release is the Obstacle Course where the strategy and tower-defense elements are set aside for a straight-up competitive time race. All of the game’s stages serve as courses where the towers and traps are preset. First to the finish line wins, loser cries in shame for all eternity. And just like in War mode, all stages, skins and avatars are unlocked out of the box.

While the Obstacle Course and new rock skins are a treat, the real improvements are the previously mentioned control tweaks. Rock of Ages was already a great playing game, though it did have some moments when slowing down and controlling your airtime provided a challenge. This time, overcoming these nuances is easier than ever. It’s not a completely different game and doesn’t make for a selling point for previous owners on its own, but it is worth letting PS3 owners know that they can now play the definitive version of one of last year’s strangest yet most refreshing titles.

Still addictive and still a blast, Atlus’ Rock of Ages is everything ancient art, history and mythology should be — ridiculously fun. A fusion of tower-defense and ball-rolling action, it delivers a great single-player campaign, extra local and online competitive modes, and loads of laughs. PlayStation 3 owners — answer the call and pick this up! It’s absolutely worth the US$10. Now get rolling!

By Jess Castro
This entry was posted on Saturday, June 2nd, 2012 at 3:13 pm and is filed under Jess Castro, Video Game Reviews. You can follow any responses to this entry through the RSS 2.0 feed. Both comments and pings are currently closed.