Celtics Hang on to Square Series 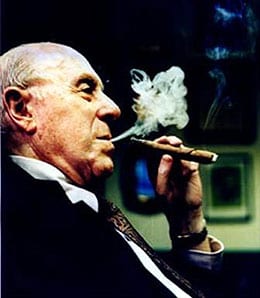 The ghost of Red Auerbach deserved a victory cigar Sunday.

The Boston Celtics burst out of the gates Sunday night looking like they were going humiliate the Heat.

However, yet another poor second half by Boston – and particularly poor third quarter – allowed Miami to roar back to tie the game and force overtime, where the Celtics managed to eek out a two-point win, 93-91, to square the Eastern Conference Finals at two games apiece.

As he has been almost throughout the playoffs, but particularly in this series, Rajon Rondo was spectacular. He’s been playing crazy heavy minutes, and showing a much more deft shooting touch than he did in the regular season, scoring at least 15 points in all four games of this series so far.

Rondo has also been piling up the boards, although he has yet to reach double digits in this series, but for the Celtics’ floor general, it’s all about his lofty assist numbers. He dished 15 more dimes Sunday, including a had-to-see-it-to-believe-it bounce pass to Paul Pierce as part of Boston’s 61-point first half explosion.

Rondo got hurt earlier this season, opening the door for Avery Bradley to emerge. Now it’s Bradley (shoulder) who’s out and Rondo carrying the Celtic backcourt almost single-handedly with Ray Allen mostly looking like a shell of himself.

Kevin Garnett, who lost one of his key records from his Minnesota days last year, has looked incredibly rejuvenated in these playoffs. Talk about a dude that looked like a shell of himself at times in recent seasons, the Big Ticket is fully healthy again and playing like it.

KG again played huge minutes in Game Four and while he was unable to repeat his amazingly efficient Game Three showing (10-for-16 from the floor), he matched his playoff highs from this season with 14 boards and five blocks, while chipping in 20 points, three assists and two steals. Without Garnett’s work on the glass, Miami would have dominated the rebounding story, and likely completed the huge comeback.

With Dwyane Wade just missing a game-winning trey at time expired, the Eastern Conference Finals was this close to being 3-1 Miami with the series shifting to South Beach for the clincher. Instead we’ve got a best of three and all bets are off.

As we discussed earlier in the season, Wade dealt with some injury issues and his scoring was down, but for most of the playoffs he’s looked like the man.

However, Flash has been a completely different player since the series shifted to Boston. After a few dominant efforts against the Pacers and some tremendous shooting in the first two games of this series (16-for-28 combined), Wade has gone chilly, yet he’s getting his shot off way more in Beantown (16-for-42, including an ugly 7-for-22 Sunday).

He did nail a couple of 3-pointers Sunday, but of the four he missed, that game-ending heave is definitely one that he’d like a do-over on. And if Boston finds a way to pull this series out, it’s a shot that could haunt Wade for a while.

Of course, to hear Boston Coach Doc Rivers describe it, there was some divine intervention involved with Wade’s miss.

”Red wasn’t going to let that go in, you know that,” he said. ”Not in the Boston Garden.”

He was referring, of course, to Red Auerbach, who coached the Celtics for years before taking over as team president and remaining a team executive until his death in 2006. No one epitomizes Celtic pride as much as the cigar-chomping Auerbach did.

And, apparently, he’s still having an impact on the game.

After getting slapped around for most of the first half, Miami seemed on a mission to snatch this game away from the Celtics and grab a stranglehold lead in the series. But that huge comeback hit a serious snag in overtime, when LeBron James fouled out with just under two minutes to play.

You could probably much feel the air rush out of the Heat after that call, marking King James’ first time fouling out since he took his talents to South Beach.

Suddenly, Boston is just two wins away from going to the NBA Finals for the third time in five years. Pretty unbelievable considering the awful start to the season this team had. And remember that the Celtics were still struggling with a sub-.500 record at the All-Star break.

Of course, Boston had to overcome the loss of one of its big guns as well, as Paul Pierce fouled out for the third time in the past five games. Fortunately, he stuck around long enough for his second straight 23-point effort, giving him at least 21 points in each of the past three games after that horrible 5-for-18 showing in Game One of this series.

The Truth also shot much better in this game (8-for-18) than his 7-for-21 performance in Game Three. He’s managed to can a couple of treys in each of the past two games and Pierce pitched in with six boards and a couple of steals before getting DQed.

Ray Allen looked like a different player Sunday. He was able to play his heaviest minutes of these playoffs, and his legs looked strong in his best outside shooting performance this spring as he knocked down four from beyond the arc en route to a 16-point night. You know what they say: shooters shoot. And Allen finally did exactly that, setting a new playoff high this season by hoisting up 16 attempts. The fact that only six went down is a problem (and some of those misses were butt-ugly), but it was a good sign just to see him unafraid to shoot. Because, as we all know, that’s what shooters do.

So now we head south for the pivotal Game Five in Miami on Tuesday night. And even if Boston can’t pull off this improbably comeback (it hasn’t turned around a 2-0 series deficit since 1969), we’ve got a series now. And that’s what this time of year is all about.

By RotoRob
This entry was posted on Monday, June 4th, 2012 at 1:03 pm and is filed under BASKETBALL, Game report, RotoRob. You can follow any responses to this entry through the RSS 2.0 feed. Both comments and pings are currently closed.