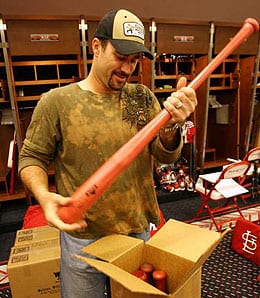 Most people were probably unaware that Jeff Suppan was still playing when the Padres brought him up a few weeks ago to supplement their ravaged rotation.

So imagine the surprise when he was actually useful for three starts (16 IP, 14 hits, three earned runs, one homer, five Ks, four walks and a 2-1 record).

Well, we can all relax now. The world is not going to be stop spinning on its axis. Suppan is back to being useless. In three starts since that trio of nice efforts he’s gone 0-2 and, in 14 2/3 IP, he’s been tagged for 20 hits, 15 runs, three homers and nine walks while striking out just three.

Last year, we assumed that Suppan’s lack of appeal would give Danny Duffy plenty of chance to establish himself in the Royal rotation. And sure enough, Suppan didn’t see a day of action in the bigs in 2011.

He actually used to be a pretty decent innings eater, which is a back-handed compliment if we’ve ever heard one. We’re talking about a dude who is striking out 2.05 batters per nine.

Clearly, the Padres are desperate for anyone who can start. Hell, they just signed Jason Marquis to a minor league deal. And as pathetic as that sounds (and is), Marquis will likely wind up taking the rotation spot of Suppan or perhaps Eric Stults.

Obviously, if you took a flier on Suppan in your NL-only league after his surprising start, you should have cut bait by now.

By RotoRob
This entry was posted on Thursday, May 31st, 2012 at 11:17 am and is filed under BASEBALL, MLB Today, RotoRob. You can follow any responses to this entry through the RSS 2.0 feed. Both comments and pings are currently closed.