Saving Grace: No Ray of Sunshine 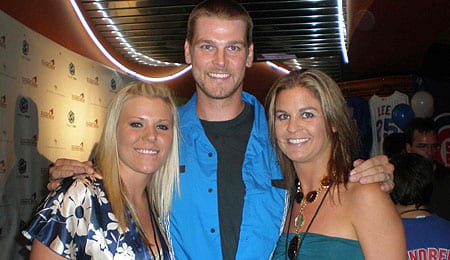 Kerry Wood may be popular with the ladies, but he’s been wearing out his welcome among Fantasy owners.

Two weeks ago I listed every American League closer along with some middle men I felt you should keep your eye on. From here on out, I’m going to highlight the situations of just certain teams I feel bear closer inspection. While the focus is obviously closers, I’ll continue to monitor the dynamics of each bullpen, including middle men.

Chris Ray returned to the O’s after spending nearly a month in the minors to get some regular work and hopefully find his groove. Unfortunately, he was hit hard in his second outing. George Sherrill is very safe, especially considering he’s on a very nice roll right now.

Kerry Wood continues to be shaky in the closer role for the Tribe. In five appearance since the last time I wrote, Wood has given up four earned runs, blown two saves and taken a loss. His ERA was above 5.50 until his last outing, and he has an unsightly WHIP of over 1.50. The Indians just acquired Chris Perez from the Cardinals, so Wood better start looking over his shoulder. The long leash just got a little shorter. Fortunately for Wood owners, Perez was smacked around like a step child in his Cleveland debut, but there’s no doubt he’ll be groomed to be the closer of the future.

Ater a butt-ugly May, Brandon Lyon has steadily lowered his ERA to 3.89 thanks to a brilliant June in which he surrendered just one earned run in 16 IP of work. While Fernando Rodney is firmly entrenched as the Tigers closer, Lyon has made a case for himself with his recent efforts. So if Rodney’s regular “interesting” saves start getting a bit more tense, owners should be aware that the Tigers have options.

With the Royals struggling in June, Joakim Soria has had inconsistent save opportunities. He’s got two saves and two blown saves, but really hasn’t pitched poorly at all. Meanwhile, his main competition for saves, Juan Cruz, has completely imploded, turning into a batting practice pitcher – or so it seems. He’s allowed earned runs in six of his last nine appearances and has seen his ERA jump from 3.00 in late May to well over 5.00 now. Cruz needn’t worry about his pecking order in the Royal pen, however; the entire relief corps (outside of Soria) has been pathetic in recent weeks. It’s the same story in KC: the team is struggling to find a bridge from the starters to Soria. If you’re seeking a dark horse or a depth pick in a deep AL-only league, keep your eye on veteran Roman Colon. He was brilliant at Triple-A Omaha, earning a promotion last month for his first taste of the bigs since 2006, and so far, he’s been very tough to hit. This one-time “can’t miss” prospect could easily work his way into a set-up role soon.

While not Fantasy relevant, it’s worth noting that on Sunday, Mariano Rivera became the second reliever in big league history to reach 500 career saves. Mo trails only Trevor Hoffman on the all-time list and the milestone save pads his Hall of Fame resume even more. Meanwhile, Brian Bruney’s old nemesis — control issues — cropped up again Monday, and if this continues, Phil Hughes, who has pitched very well lately, could have a chance to become the top righty set-up man.

Michael Wuertz hit a rough patch a couple of weeks ago, but seemed to have figured things out in his last five appearances. His overall numbers, helped along by some solid control, are still pretty sweet. Andrew Bailey continues to excel in the closer role, leaving Wuertz to set the table. It’s worth noting that Brad Ziegler has improved his hit rates and turned in some much better results lately, so don’t forget about him.

Since the last time I wrote about the AL teams, J.P. Howell has recorded two wins and two saves and seems to be emerging as the go-to guy in the pen. While Joe Maddon hasn’t come out and said the Howell is the closer, it seems that Howell has his manager’s trust in tough situations more than the other Tampa relievers. Besides, there’s still no guarantee that Troy Percival will ever see the light of day again. Further cementing Howell’s status is the fact that this week Jason Isringhausen underwent Tommy John surgery, a procedure which puts the remainder of his career in jeopardy as well.

Frank Francisco came off the disabled list and promptly got bumped down the Texas reliever food chain. It looks like the plan is to ease Francisco into the closer role, but that may be tough as C.J. Wilson continues to excel, allowing only two earned runs in the past two months. If Wilson continues to pitch well, Francisco may just stay where he’s at – in middle relief. Francisco got lit up and blew a save chance in his last outing, providing further insurance for Wilson, who’s job may be safe until at least the All-Star game at this point.

Scott Downs hit the disabled list shortly after my last column and Jason Frasor took over as the Jays closer. Frasor has been fabulous all year but only has two saves on the year and Toronto — back to its losing ways — has struggled to give him opportunities. Downs is eligible to come of the DL on July 1, but it’s doubtful he’ll be ready until at least next week. Downs was dominant as the Jay closer before he was hurt, but Frasor has pitched nearly as well. Both pitchers are worth owning, and Frasor should remain an AL-only asset after Downs returns.

Zaun seems to have been helped by the extra rest, batting .500 with five runs and five RBI in limited action this month. Saturday, he jacked a solo blast as part of a 3-for-4 night.

Thank the heavens, the Eagles finally drafted a good wide out.

The buzz started when Tavares was given an “exceptional player” exemption that allowed him to play in the OHL at the tender age of 14.

The Wire Troll: The Return of Deer-Meat Boy

Barmes was dropped in the batting order last week, but this weekend, he was moved back up and has responded with five hits in the past two games, smacking a homer and swiping a base on Saturday.