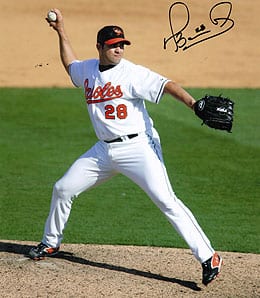 Danys Baez could have some value if George Sherrill falters again.

Welcome to the debut of Saving Grace, RotoRob.com’s newest Fantasy baseball column. In this column, Todd will keep you up to speed on the state of bullpens around the majors — who’s closing, who’s hurting and who’s closing in on closing. Each week, he will alternate between the American and National Leagues, this week kicking things off with a look around the pens in the Junior Circuit.

The Man: George Sherrill. Sherrill had a rough start to the season and looked to be on shaky ground with former closer Chris Ray coming back from Tommy John Surgery. Since the end of April, Sherrill has been lights out, giving up only two earned runs. Meanwhile, Ray has struggled and has been demoted to the minors.

Keep an eye on: Chris Ray. Ray was sent down to get some regular work in the hopes he regains he pre-surgery form. The O’s would like to return him to the closer role, but he’ll have to earn it. In the meantime, if Sherrill struggles, Danys Baez has closing experience, and looks to have gotten his career back on track this season.

The Man: Jonathan Papelbon.  Papelbon is one of the top closers in the game today and leads arguably the best bullpen in the league. Barring injury or implosion, Paps has nothing to worry about.

Keep an eye on: Takashi Saito. Saito hasn’t given up an earned run in a month and he has closing experience. Hideki Okajima and Manny Delcarmen have each had excellent seasons although Delcarman has had a rough go lately. Each are valuable components to Boston’s success and have value in leagues that use middle relievers.

The Man: Bobby Jenks. Talk going into this season was about Jenks’ declining strikeout rate giving many in the Fantasy world cause for concern. Talk about much ado about nothing. Jenks has been dominant and is firmly entrenched as closer.

Keep an eye on: Octavio Dotel. Dotel has had a great year and would probably get the first look should Jenks go down. His strikeout rate has been good this season and he has closing experience. Matt Thorton has held opponents to a batting average under .200 and his been very effective in his role as a left-handed set-up man.

The Man: Kerry Wood. Wood has had some truly dreadful moments this season for the woeful Tribe and his numbers show it. As of late he’s looked better and lowered his ERA into the 5.00 range. The problem for Wood is going to be opportunity as it looks like wins in Cleveland are going to be few and far between.

Keep an eye on: Jensen Lewis. While it’s not been a banner season for Lewis, he’s still someone you need to know. He’s had two excellent seasons before this one so the talent is there; he just needs to figure things out. Matt Herges has been a pleasant surprise in the Tribe’s pen. In the 13 games he’s appeared in, he’s put up excellent numbers.

The Man: Fernando Rodney. Conventional wisdom had Brandon Lyon taking over as the closer in Detroit this season. But Rodney, not Lyon, won the job out of Spring Training and has done nothing to lead Detroit to think it made a mistake. Rodney doesn’t have dominant stuff, but he’s pitched in the closer role on and off for a few years. I wouldn’t consider him a sure thing, but wouldn’t be surprised either to see him keep the job all year.

Keep an eye on: Brandon Lyon, Joel Zumaya and Ryan Perry. While Lyon has the experience, Zumaya and Perry have the live arms. Lyon will probably get first crack at the job should Rodney falter, but it wouldn’t surprise me to see Zumaya or Perry get a sniff of the job.

The Man: Joakim Soria. Soria has been one of the best closers in the game for a couple of years now. Health has been his big concern this year as he’s had two stints on the DL. While he has excellent numbers there has to be legitimate concern about his health. Still, Soria will have a long leash and won’t be removed from the closer role unless he physically can’t get the job done. How many opportunities the Royals give him remains to be seen.

Keep an eye on: Juan Cruz and Kyle Farnsworth. Cruz got the call when Soria was on the DL earlier and did an acceptable job. He’ll probably get the call if Soria goes down again. Farnsworth had a rough start to the year, but recently went for over a month without allowing an earned run.

The Man: Brian Fuentes. While he hasn’t exactly made anybody forget about Francisco Rodriguez, Fuentes has racked up a large number of saves for the contending Angles. His ERA and WHIP are a little higher than you would like to see on a closer, but there’s really no danger that he’ll be removed from the closer role.

Keep an eye on: Kelvim Escobar. The Angel bullpen has been atrocious this year, ranking dead last in the AL in ERA (over a run worse than any other team, shockingly). Escobar has been sent to the pen as his surgically repaired shoulder has been causing him discomfort. There’s a lot of risk here but the Halos don’t have any real good options right now.

The Man: Joe Nathan. If you own Nathan, just sit back, relax and enjoy the security that one of the top closers in the games can give you. Nothing short of an act of God will endanger his job.

Keep and eye on: Matt Guerrier. Guerrier has put together a fine season, racking up a lot of innings to go with a sparkling ERA and WHIP. Aside from Nathan he’s been the most consistent reliever in the Twin pen, turning in only one bad outing.

The Man: Mariano Rivera. Like Nathan, Rivera isn’t going anywhere. While he does show some signs of age, this is still the Superman of closers we’re talking about. He’s got the job for life.

Keep an eye on: Phil Coke and Alfredo Aceves. The two are stabilizing forces in the bullpen, racking up lots of innings as they keep the Yankees in the game. They’re probably destined to keep their current roles even in the event that Rivera goes down for any length of time as they’re simply too valuable in bridging the gap between starter and closer. Should Mo get hurt, I’d expect Brian Bruney to get a chance for saves.

The Man: Andrew Bailey. Well, the Brad Ziegler era was fun while it lasted. Long live Andrew Bailey. There’s no telling how long the Bailey bandwagon will ride so jump on, but don’t be afraid to jump off if the going gets tough. Bailey’s been effective in the closer role, but he’s just a rookie. No telling how he’ll react when times get rough.

Keep an eye on:  Michael Wuertz. Wuertz has been consistent out of a pen that hasn’t looked good thus far. He’s probably the next best option.

The Man: David Aardsma. When Brandon Morrow proved totally ineffective, Aardsma stepped in and solidified the postion. Aardsma has looked like the closer San Francisco thought it was getting when it drafted him out of Rice oh so many years ago. It’s taken awhile, but Aardsma has looked like the real deal. There’s always reason for concern when an unproven commodity steps in as a closer, but pitchers with a lesser pedigree have been very effective in the job.

Keep an eye on: Sean White. White has been excellent out of the M’s bullpen, but he’s about the only one who can say that. Miguel Batista has decent numbers, but he’s been entirely too hittable this year.

The Man: Lord Only Knows. Hey, need an odd save every now and then? Grab someone from the Rays pen of J.P. Howell, Dan Wheeler, Grant Balfour, Joe Nelson, Randy Choate and Lance Comier and pray to the higher power of your choice. They’ve all got a legitimate shot at getting a save on any given night. This Fantasy mess was created when closer Troy Percival went down with a potential career-threatening injury. Manager Joe Maddon said he was going to play the match ups and he’s been true to his word. I’d expect this to continue for the rest of the season as Maddon is not above trying different things.

Keep an eye on: J.P. Howell. Howell has got the last few saves, but I wouldn’t expect that to keep up. Maddon will go with who’s hot. Howell may be hot now but he’s bound to cool off. All of the above mentioned guys could get a call to close games.

The Man: C.J. Wilson. When Frank Francisco hit the DL for the second time, Wilson retook the gig. Wilson was the Texas closer before losing the job. He’s looked very good this year and is a good option to finish games for the Rangers.

Keep an eye on: Frank Francisco. When he’s been healthy, Francisco has been dominant. The thing is, he hasn’t exactly been healthy this year, already enduring two stints on the DL (including a current one). He’s a good guy to wait on as his numbers have been absolutely awesome, but he needs to be 100 per cent to be effective.

The Man: Scott Downs, After B.J. Ryan imploded, Downs stepped in and has looked downright unstoppable. The Jays have struggled as of late to give Downs games to close out, but it’s his job to lose.

Keep an eye on: Jason Frasor. Frasor has closed before so he knows what it takes. He’s also got incredible numbers to back it up. He’s had only one bad outing this year in which he gave up four earned runs. The fact that he’s only given up five on the year should tell you how good he’s been.

By Todd Habiger
This entry was posted on Tuesday, June 16th, 2009 at 5:15 pm and is filed under BASEBALL, Saving Grace, Todd Habiger. You can follow any responses to this entry through the RSS 2.0 feed. You can skip to the end and leave a response. Pinging is currently not allowed.