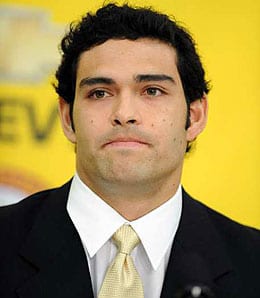 Mark Sanchez is an intriguing rookie to watch this season.

To wrap up the 2009 RotoRob NFL Draft Kit, we’re going to take a look at some Rookies you need to be aware of for Fantasy purposes.

Mark Sanchez, New York Jets: The USC product has already been named the starter, but under Rex Ryan look for the J-E-T-S to lean heavily on Thomas Jones, Leon Washington and even Shonn Greene. That and a strong defense was a recipe for success in Baltimore last year, which is where Ryan served as defensive coordinator. Expect Sanchez to post modest totals, meaning he should only be selected in leagues where you’ll be carrying three quarterbacks.

Matthew Stafford, Detroit Lions: Stafford has completed just 12 of his 27 passes this preseason, though a banged up receiving corps hasn’t done him any favours. It seems unlikely he’ll unseat Daunte Culpepper as the team’s Week One starter, and even once he gets in the lineup, there isn’t a lot of high-end talent outside of Calvin Johnson. Bypass Stafford in single-year leagues.

The only other true quarterback drafted in the first three rounds was Tampa Bay’s Josh Freeman, who remains in a three-way competition with Luke McCown and Byron Leftwich for the starting job. It’s hard to picture anyone in that group being better than a No. 3 Fantasy QB.

Knowshon Moreno, Denver Broncos: Moreno (knee) has carried the ball just three times this pre-season due to a sprained MCL. However, despite rumblings that Peyton Hillis might be the team’s Week One starter, Moreno remains the best bet in the Denver backfield. Given the team’s depth the rookie may not be a true featured back, but he’s still worth grabbing as a low-end No. 2 option.

Chris Wells, Arizona Cardinals: Much like Moreno, Wells (ankle) has been held back this pre-season by an injury and has yet to appear in a game. With Wells sidelined, Tim Hightower has looked pretty good (15 carries, 66 yards) and should at least split time with Wells this season. What is really working against both of them is Arizona’s deadly passing attack, which will certainly reduce the ground game to an afterthought some weeks. Draft Wells as a mid-level No. 3 Fantasy back.

Donald Brown, Indianapolis Colts: Brown has looked explosive in limited touches thus far, but unlike the two rookies listed above him, the UConn product has little chance of being the No. 1 back this year unless Joseph Addai were to be injured. Instead, expect the Colts to deploy a committee approach with Addai and Brown, similar to what they did in years past with Dominic Rhodes. As such, Brown is more of a fourth back or Flex candidate, though Addai owners would be wise to handcuff the two.

Philadelphia’s LeSean McCoy has gotten plenty of work with Brian Westbrook (ankle) recovering from ankle surgery, and he’s looked good in the process. Unfortunately, the Eagles are loaded with impact players on offense, leaving McCoy primarily as a necessary handcuff for Westbrook owners. He’s also a strong No. 5 back on his own…San Francisco’s Glen Coffee leads the NFL in pre-season rushing (196 yards). That’s the good news. The bad news: Marcus Mason led the league in 2008. Yes, that Marcus Mason. Coffee has shown enough to be worth a late-round selection, just don’t expect him to see the field much as long as Frank Gore stays healthy…The New York Jets’ Shonn Greene has been banged up and is behind Jones and Washington on the depth chart, but he’s got enough potential to be selected as your fifth or sixth back in deeper leagues…Jacksonville’s Rashad Jennings is battling with Chauncey Washington to be the backup to Maurice Jones-Drew. While this may not sound like a great spot to be in, keep in mind Jones-Drew has never reached 200 carries in a season so his ability to hold up under a full-time workload is unproven. Jennings isn’t a name for standard leagues, but those in deep single-year or keeper formats might want to roll the dice.

Michael Crabtree, San Francisco 49ers: Any breakdown of Crabtree must begin with his contract status, as the 10th overall pick continues to hold out because he feels he should be paid more than the seventh pick. Whatever. Even unsigned, Crabtree offers the most upside of any rookie receiver, though the longer he holds out the longer it may take to see it. He’s a risk/reward selection at this point and is someone only an owner with a strong top three receivers should consider. Just make sure your fifth receiver is a steady one.

Percy Harvin, Minnesota Vikings: Perhaps the most intriguing rookie this season, Harvin is expected to line up all over the field, including serving in the club’s new Wildcat formation. He has speed to burn and is a threat to go the distance every time he touches the ball. That being said, Harvin’s durability is a red flag, which combined with his less-than-stellar work as a route runner make him a bit of a risk. Some may fall in love with his potential and reach for him on draft day. Don’t be that guy. If he’s around in the latter rounds, though, by all means make him your fourth receiver.

Jeremy Maclin, Philadelphia Eagles: Maclin should push Reggie Brown to be the team’s third receiver, but as noted with McCoy, Philly has a lot of options offensively. Maclin’s value is no greater than that of a low-end No. 5 or quality No. 6 receiver, though those that count special teams yardage should keep on him to see if his fumbling issues subside enough to earn him a regular role as the Eagle return man.

Hakeem Nicks, New York Giants: There are a ton of young wideouts in Gotham, but Nicks might have the most upside of the bunch. He’s physically mature at 6’1”, 215 pounds, and should still be available in the final round of most standard drafts. He’d be a great flier at that point.

Oakland’s Darrius Heyward-Bey was the first wideout taken, but he went into a bad situation. The Raiders have a quality triumvirate of tailbacks, which should be the focal point of the offense, while JaMarcus Russell continues to struggle with his consistency from one practice to the next. Heyward-Bey isn’t an option in standard leagues and is no more than a borderline sixth or seventh Fantasy receiver…Cleveland’s Brian Robiskie has been improving as camp wears on and remains in contention for the starting job opposite Braylon Edwards. It’s debatable how much value that post would afford, however, leaving Robiskie as a mediocre sixth wideout at this point.

Brandon Pettigrew, Detroit Lions: A quad injury has slowed Pettigrew in the preseason, but the starting job is still his. With limited options outside of Johnson, Pettigrew could be the target of a lot of underneath and check down routes. Consider him an interesting sleeper as a No. 2 tight end in point-per-reception formats.

Chase Coffman, Cincinnati Bengals: Coffman posted huge numbers in college and has a great pedigree (his father, Paul Coffman, was an NFL tight end). Unfortunately, the tight end position has never been featured in Cincinnati with Carson Palmer at the helm, and Coffman is still behind Ben Utecht on the depth chart. At best he’d earn a roster spot if someone the caliber of Antonio Gates or Tony Gonzalez was your starter and you wanted to draft purely on potential in the final round.

In order to guide you through Draft Day, we’ve provided comprehensive customizable cheat sheets for quarterbacks, running backs, and receivers.

Cincinnati Bengals: Before an arm injury limited him to just four games last season, Palmer had tossed at least 26 touchdown passes in four straight seasons. His wing looks fine, but a minor high ankle sprain might slow him down a bit in the preseason. Nonetheless, Palmer could be primed for a fine comeback in 2009.

The team was winning close games and Zorn was playing the part of riverboat gambler. With that 6-2 start came expectations that were never realized last year, but the team did have some bright spots.