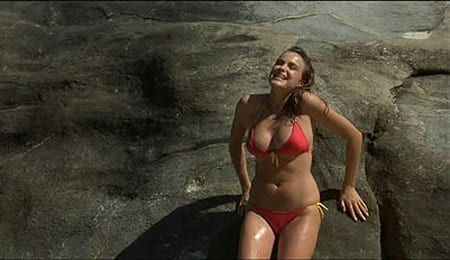 Whether he’s burying his face in the bust of Michelle Johnson, Jessica Simpson or Natalie Smith, we expect Tony Romo to be a bust of his own this season.

While busts are great to look at, fondle, bury your head into and generally bask in the presence of, absolutely no one wants to draft any busts for their Fantasy football team. But don’t sweat it, the 2009 RotoRob NFL Draft Kit is here to help you avoid those kinds of busts.

Romo and the phrase “quiet offseason” does not seem to go together; if it’s not dealing with a playoff loss, the public is trapped with information on who he is dating. Is it Jessica Simpson or the 43-year-old Michelle Johnson from Blame It On Rio? This offseason featured another breakup for Romo but this time with Terrell Owens. Whenever the braggadocios receiver leaves a spot, his former team is not the same for quite some time.

Just ask the 49ers. Owens was the last receiver to break the 1,000-yard plateau there back in ’03. The Eagles finally seem to be equipped with respectable receivers after struggling to find guys to fill the void. Expect Dallas to have a similar problem and Romo is likely to suffer the consequences.

Over the past two seasons with Owens in tow, Romo totaled 62 touchdown passes and 13 300-yard passing games. Regardless of what you think of T.O. as a person or player, it’s clear that when he exits, he is not easy to replace. Don’t look for Roy E. Williams to fill the void. Don’t be surprised if Romo’s numbers decline without Owens to bail him out.

Any veteran of Fantasy football has heard of the “Curse of 370” which was started a few years ago by the folks at Football Outsiders. For the uninformed, it states that backs that carry 370 times or more during the regular season are often ripe for injury the following season. With the exception of the immortals (Emmitt Smith, Walter Payton, LaDainian Tomlinson, Eric Dickerson), most backs see to a sharp decline in productivity in the season following a 370-carry year.

Turner carried 376 times in ’08, which was a bit surprising considering it was his first year as a full-time starter and Atlanta has a respectable backup in Jerious Norwood. Instead of using his assets, head coach Mike Smith pounded and pounded and pounded some more with Turner. There was no coincidence that after carrying 25 times for 208 yards versus the 2-14 Rams in the regular season’s final game that the 27-year-old laid in egg against the Cardinals during the first round of the playoffs.

After rushing for nearly 1,700 yards and 17 touchdowns, Turner will experience a drop in his numbers in 2009 — you can take that to the bank.

Much of the pre-season talk regarding Westbrook has featured the word “hobbled” in front of his name, which is never a good sign. He is recovering from right ankle surgery and should be ready by the regular season’s beginning. However, as 30 beckons for Westbrook on September 2, he is trying to buck the all too familiar trend of running backs petering out at that age. Personal history is already against him. He has never played an entire season. As backs age, staying healthy becomes increasingly less likely.

Just consider that the surgery stems from an ankle injury Westbrook suffered all the way back in Week Three last season during an Eagle victory over eventual Super Bowl champion Pittsburgh. Once the mileage stacks up on backs, getting over ailments is not such an easy chore.

He is a gamer and will be out there, but don’t expect him to reach levels of years past. The Philly passing attack is a bit more talented and the club drafted Pitt’s LeSean McCoy, who will be a factor this season at some point. In all, Westbrook’s prime is gone and his days of being a top 10 back are likely to finish up this season.

Any time a player has a big year and then decides to hold out during the following season, the outcome can be negative. White, who has two straight 1,200-yard seasons to his credit, is in the middle of holding and is apparently looking for “Larry Fitzgerald money.”

As White does this, he is missing out on conditioning and reps in training camp. Plus, he is not doing any favours for his second-year quarterback, Matt Ryan. The Falcons made the playoffs last season and now it appears the trappings of success are becoming a problem for White.

Atlanta lost receiver Harry Douglas early in camp to a torn ACL, thus putting just a bit more pressure on White to produce. This injury, combined with opponents not going to sleep on a previously dreadful franchise, will make White’s road to glory far more difficult in 2009.

While Jeff Garcia is not going to the Hall of Fame, it is a lot easier catching passes from him than doing so from either Byron Leftwich, rookie Josh Freeman, or Josh McCown. Leftwich should get the nod to start, but he is not as effective a passer as Garcia. That is likely to have an impact on Bryant, despite new head coach Raheem Morris saying he wants to take a less conservative approach offensively.

Last season, Bryant posted career-best numbers in receptions (83), yards (1,248), and touchdowns (seven). Also, he had three 100-yard performances in a row over the season’s final four games. Those numbers will be difficult to repeat, though, with the changes in personnel Tampa has undergone.

Carolina finished atop the NFC South division with a stellar record of 12-4, including a perfect 8-0 mark at home. The Panthers brandish one of the NFL’s most potent rushing attacks, and their 2008 per-game average of 152.3 yards was good for third in the league.

The Buccaneers did not win the division like they did in 2007, but they did have a winning record at 9-7.

Although the Packers finished 6-10, seven of those losses came by a combined 21 points, indicating they weren’t far from being in playoff contention.