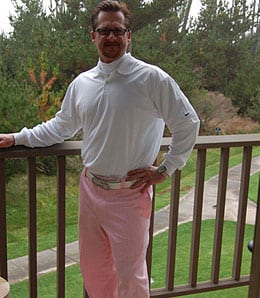 Gregg Zaun is barely playing, but that gives him more time to wear his groovy pink pants.

It seems strange to recommend ditching a player who has nine hits in his last 13 at bats, but with the O’s really unable to make up much ground on the Rays – even though they just swept the Nats – there’s no point in them trotting 38-year-old catcher Gregg Zaun out there when they’re trying to develop the most exciting young catching prospect in the game in Matt Wieters.

Zaun seems to have been helped by the extra rest, batting .500 with five runs and five RBI in limited action this month. Saturday, he jacked a solo blast as part of a 3-for-4 night. The vet saw plenty of action earlier this season, and despite a less patient approach, he’s been doing a solid job of getting on base, but unless you’re in an extremely deep AL-only league, Zaun has outlived his usefulness, something we expected from the beginning of the season.

If you’ve been hanging onto Zaun in an AL-only league, you’re better off picking up someone like Dioner Navarro, who is grossly underowned, but starting to heat up.