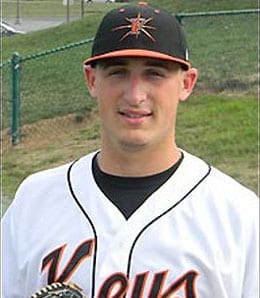 Clayton Schrader looks like a closer of the future in B-More.

With the season ending next week, we will wrap up Saving Grace for 2011 with a final look around AL bullpens.

Since my last American League edition, Jim Johnson has since taken over for Kevin Gregg as the closer in Baltimore. Johnson has recorded three consecutive saves already this week, putting him up to nine on the season. Gregg’s last save opportunity was on September 10, when he blew it and was tagged with the loss. For the rest of this season, Johnson should remain the lead closer. Looking more long-term, Johnson is expected to get a chance to start, so once the Orioles trade away Gregg (probably at the deadline next season), minor leaguer Clayton Schrader might be ready to take over as closer in B-More. Yes, he has wildness issues, but he was lights out nasty before getting hurt.

With both Jonathan Papelbon and Hideki Okajima entering free agency after this season, look for the Red Sox to go shopping for a big name closer, unless they opt to hand the job to Daniel Bard, that is. Not just Papelbon, but Heath Bell, Jose Valverde, Francisco Cordero, and Francisco Rodriguez will all become free agents after this season. So will Matt Capps, Kyle Farnsworth and Ryan Madson. Boston’s recent struggles have left Papelbon with one save this month, and Daniel Bard with three blown saves. Papelbon did blow the save on Tuesday, however he should resume his All-Star caliber performance for the playoffs, assuming the BoSox don’t completely collapse and miss them. Truth be told, with Papelbon getting roughed up in his last appearance and Bard really scuffling lately, Alfredo Aceves has been money lately, tossing five straight shutout appearances. Clay Buchholz (back) could pitch out the bullpen for the Sox, possibly as soon as Sunday. He won’t make another start until 2012 at this point.

Chris Sale’s been a real workhorse in the White Sox pen and while many believe he has serious closer potential, he’d rather be a starter and there’s talk that he’ll get his chance to do so next season.

Chris Perez has se a career high with 35 saves so far, however, many of his outings have not been very clean. Could the Indians look to move the arbitration eligible Perez this offseason? Vinnie Pestano has three holds within the last week and may help fantasy owners get that extra category during their championship weeks. However, it’s worth noting that the Cleveland pen has been worked hard with Rafael Perez, Tony Sipp and Joe Smith all within the top eight in the AL in games pitched. Watch for Manager Manny Acta to take it easy on his bullpen in the final week, so that could mean less Chris Perez and Pestano, too.

Jose Valverde got his 47th save in 47 chances on Wednesday, leaving him one save away from a new career high. He leads the majors in saves and has only given up three runs in all of August and September. Valverde’s contract is up this year and one team will likely pay the big bucks for him. Set-up man Joaquin Benoit hasn’t been as dominant as he was last season, but has set a new personal best with 27 holds and his addition last offseason is one of the reasons Detroit is headed to the playoffs.

Struggling with a hamstring injury, Joakim Soria is unsure if he will pitch again this season. His last save was on September 11, which was also his final appearance. He threw on Wednesday, but there’s no point in KC pushing things with him. Still, looking long-term, Soria is one of two closers in the majors (the other is San Diego’s Bell) that has saved over 50 per cent of his team’s win over the past three seasons. Aaron Crow blew the save on Wednesday, giving up two hits in one-third of an inning. He’s now surrendered 55 hits in 61 IP in what has been an impressive rookie campaign. However, look for another rookie, Greg Holland, to be the best option to bag saves over the final week of the season. Given how good he’s been as a shutdown reliever this year, Holland looks like a potential closer of the future. In fact, he’s on pace to set a new AL record for the highest percentage of stranding inherited runners (minimum 17). Only one of the 31 runners he’s inherited have scored (96.8 per cent strand rate).

While he hasn’t been quite as dominant as he was in his first look last season, Jordan Walden has enjoyed a very fine rookie season with 31 saves and a 2.41 ERA. Former Tiger closer Fernando Rodney becomes a free agent after this season, but look for Walden to remain the man next season and to potentially have a better season with a full year of closing under his belt. In Walden’s last six outings, he has five saves and a win, his fifth of the season (which isn’t necessarily a good sign for a closer).

And the new all-time saves leader is… Mariano Rivera. He recorded his 602nd career save on Wednesday, and he now converted 14 consecutive save chances. As a tribute to Mo’s feat, here’s a little tip of the hat to him. Rivera’s usual brilliance is a big reason the Yankees clinched the AL East on Wednesday night as well. Rafael Soriano, who recorded his second save during the second doubleheader game Wednesday against the Rays, may opt out of his final contract year and become a free agent this offseason, although you’d think that would be pretty silly considering injuries have limited him to 40 games and he hasn’t been nearly as good as he was last season.

Brandon League picked up two saves this week, including his 36th of the season on Wednesday. Main set-up man Jamey Wright will become a free agent, and he’s been valuable as a late-inning man, but League’s performance this year should solidify the closer job for him in 2012.

Farnsworth has been dealing with an elbow injury, but after having no problems throwing 45 pitches off a mound Wednesday, he may be cleared to pitch this weekend when the Rays return home and hope to inch past the Red Sox in the AL Wild Card race. As mentioned, his contract ends this year, but the Rays have an option to keep him in 2012. Joel Peralta has taken over while Farnsworth has been ailing and recorded three straight saves. Peralta will also become a free agent after the season, and it would not surprise me if the Rays go after one of the top free agent closers given the abundance of them hitting the market. Top prospect Matt Moore, who had been touched up in his two relief appearances since being promoted, will make his first major league start on Thursday.

Frank Francisco, Shawn Camp, and Jon Rauch all have contracts ending and Rauch is the only one with a 2012 club option. With co-closer Rauch’s injury issues, the Blue Jays may look elsewhere for a closer. Francisco has five saves this month, his most recent against the Yankees on September 18. The Mike Napoli for Francisco deal has not worked out in the Jays’ favour. Could Casey Janssen be the team’s closer next season?

He has only one blown save which came way back on May 9 and he’s yet to lose a game this year, sporting a 4-0 record. Papelbon has been particularly nasty as of late, with 15 scoreless innings since July 16.