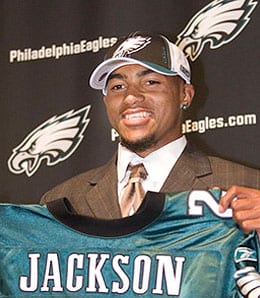 We’ve got more of the 2009 RotoRob NFL Draft Kit for you today with yet another team preview (we’re now over halfway through these puppies). We’re going to try to shoot out all these team previews and then start releasing the kit’s other goodies (cheat sheets, sleepers/busts lists, etc.). While you wonder what kind of effect the NFL court battle over its licensing deal for sports merchandise can have on sports in general, find out if the Eagles can build on their strong playoff showing and get back to the Super Bowl for the first time since 2005.

Thank the heavens, the Eagles finally drafted a good wide out. After Andy Reid was 0-for-life in this department, Philly landed DeSean Jackson and watched him blossom into the second-best receiving option Donovan McNabb has had in his career. The two combined for 62 receptions and 912 yards, lofty totals for any rookie wide receiver. While Brian Westbrook battled some injury woes and had his lowest yards-per-carry average since 2005 (another injury-plagued season), he did still account for nearly 100 total yards and a score per game. And not that I really care, but the Philly defense had another nice Fantasy year. But really, defense is so boring.

McNabb has developed a slight case of inconsistency over the last couple years. Nine times last year he finished with one or zero touchdown tosses. It’s not the end of the world and McNabb was still a top 10 Fantasy quarterback, but that does put a huge burden on your other players week-to-week. The other issue for the Iggles was the other wide out spot. Kevin Curtis couldn’t stay healthy (and he’s better in the slot anyway) while Reggie Brown regressed. Of course, Brown has been regressing since his rookie year, so that’s no surprise.

Perhaps we should have known it was coming with Reid’s pedigree, but the Eagles spent much of the offseason restocking their offensive line by bringing in former Bill Jason Peters and former Bengal Stacy Andrews. It will be interesting to see how Stacy’s brother Shawn Andrews adapts to being moved to the tackle position (and how he comes back from last year’s back injury). Aside from that, Philadelphia’s only other Fantasy impact move was letting L.J. Smith take his butter fingers a couple hours west to Baltimore. That means Brent Celek should be on your Fantasy radar as a minor sleeper.

Oh boy. Perhaps bolstered by the success of Jackson, Reid and the Eagles spent another high draft pick on a wide out, this time a first rounder on Missouri’s Jeremy Maclin. The pundits seemed to be mostly in favour of this, although Maclin is another slightly undersized guy on the outside. It’s nice to at least have one bigger target, especially in the red zone. Also, with the aforementioned Westbrook injury issues, the Eagles finally decided having a competent back-up running back was worthwhile, so they selected Pittsburgh’s LeSean McCoy. While he’s a worthy handcuff if you have large rosters, the big news here is that the Eagles now have a DeSean and a LeSean. Maybe they could wring Keyshawn out of retirement (and get him to change his spelling to ‘KeSean’). That would be great.

Same ol’, same ol’. McNabb just needs to stay healthy and he’ll be a Fantasy starter. Kevin Kolb disappointed when he started last year, but it does look like he’ll get another chance when McNabb’s contract runs out.

Westbrook and McCoy have the ability to be one of the better one-two punches in the league. The thing to watch out for is carry distribution. Obviously, we all don’t want this to turn into a committee and we don’t want Westy to lose the goal line car…er…shovel passes, so watch how the carries are doled out early on in the season.

It’s all about Jackson and Maclin. The two have a chance to be the most dynamic wide out duo in town since…I don’t know, Harold Carmichael and Charlie Smith? It’s been a long, long time.

I’m not sure if my optimism for Celek has more to do with his talent or the fact that he’s not Smith. Either way, if you wait until very late in your draft for a tight end, Celek is worth considering.

This group came back strong last season, especially in terms of pass defense. It remains one of the top Fantasy units around and is a great value once the best groups are taken way too high.

By Andy Goldstein
Tags: 2009 NFL Draft Kit
This entry was posted on Monday, June 29th, 2009 at 5:36 pm and is filed under 2009 RotoRob NFL Draft Kit, Andy Goldstein, FOOTBALL, Team report. You can follow any responses to this entry through the RSS 2.0 feed. Both comments and pings are currently closed.