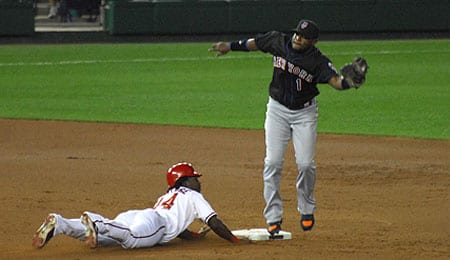 At long last, the process we began in early November of reviewing each team’s free agency movement, has come to close with this, the final installment. Yay! And there was much rejoicing. You can find the rest of the series here:

Remember two years ago, when we all thought that the Washington Nationals had a chance to be historically bad, and they turned out to be surprisingly competitive (relatively speaking, of course)? Well, that promised putrid play showed up after all, just a season later, as the Nats struggled through a dismal 59-win season in 2008. The team had no power, its pitching was awful and the best thing you can say about Washington’s 2008 was that the team speed was almost middling.

Now, the positive: there’s probably only one way to go for the Nats, and that’s up. I think. I certainly don’t see this team avoiding a fourth straight losing season, but coming in under 100 losses is a very realistic goal. As has been the club’s philosophy in recent years, there’s plenty of competition in camp, but unlike recent seasons, it’s not just about quantity over quality – there are some talented players here.

The outfield, in particular, is crowded. Lastings Milledge has a job, and he’ll bat leadoff; newcomer Adam Dunn also has a spot in the outfield, and he’ll definitely help address the team’s lack of power. Elijah Dukes seems ready to break out. First base prospect Chris Marrero, who has some serious pop, should be along in another year or so. Throw in some nice young arms on the way, such as Jordan Zimmermann (who may break camp with a rotation spot) and Ross Detwiler, and there is reason for optimism in the U.S. capital for the first time in a long while.

Aaron Boone, 1B: Boone has no speed anymore, and with his weak strike zone judgment, I’ve been wondering for some time now about his future big league prospects, but he just keeps finding jobs as the Astros signed him for one season and $750,000 and all indications were that he was going to get the lion’s share of PT at third base in Houston. However, my prediction may have come true for different reasons, as Boone is scheduled to undergo heart surgery this week – a procedure that will end his season before it begins and may very well bring his career to an abrupt finish.

Odalis Perez, LHP: The Nationals’ Opening Day starter in 2008 stayed healthy, improved his control and managed to shave almost a run and a quarter off his ERA. His reward? He wasn’t re-signed until early February, and even then it was an $850,000, non-guaranteed minor league deal. No one put a gun to his head to sign the contract, but Perez decided he wanted a better deal and refused to report to camp. A couple of weeks later, Washington said bye-bye and cut the lefty. We actually thought that Perez would have been dealt at the deadline last season, and after what transpired this winter, the Nats are probably kicking themselves for not figuring out a way to get rid of him then. Perez auditioned for other teams as a member of the Dominican squad at the WBC, but so far, there’s no news of any serious bites despite his claims that there are as many as 10 teams interested. The Mets may be a good match here, but Perez may have screwed himself with his childish stance in Washington.

By RotoRob
This entry was posted on Tuesday, March 24th, 2009 at 4:59 pm and is filed under BASEBALL, Free agents, RotoRob. You can follow any responses to this entry through the RSS 2.0 feed. You can leave a response, or trackback from your own site.