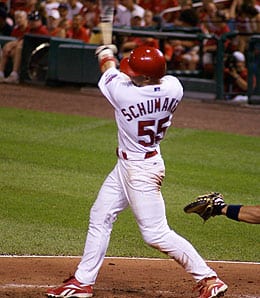 Can Skip Schumaker duplicate his breakout 2008? And can he survive at second base?

A-Roid needed surgery; Manny’s back in LaLa land; and Japan keeps winning at the WBC. Ya, baseball’s back, baby! And today, we continue our look at the free agent market, with a stop in the gateway to the south, St. Louis. If you missed a previous part of this report, fear not. We got your back.

The Cards sported both a better attack and better pitching staff in 2008, helping to erase 2007 – the team’s only losing season since 1999. Led by Albert Pujols, who overcame fears that his elbow would blow up at any second and wound up enjoying a career year, the St. Louis offense was among the NL’s best. Pujols is still a stud, and perhaps some organic growth from some of the younger players is in order, but is it reasonable to expect similar seasons out of Skip Schumaker and, especially, Ryan Ludwick in 2009? And Aaron Miles, another big surprise who overachieved in 2008, is gone.

Team speed – for years a Cardinal trait – is now a weakness, and that was not addressed in the offseason. In fact, with Cesar Izturis and his team-leading 24 thefts now in Baltimore, the Cards don’t have a single player who reached double digits in steals in 2008. Me thinks Ludwick better repeat his 37-homer season.

The pitching staff had very much of a bend, but don’t break mentality, filled with hurlers who tend to give up a fair amount of hits, but get by on their superb control. Certainly the return of a healthy Chris Carpenter offers a huge boost to a middling rotation, but he has never been what anyone would call a dominant, blow-them-away starter.

And the bullpen has its own set of questions now that Jason Isringhausen is gone. Namely, who is the closer? Jason Motte? Ryan Franklin? Josh Kinney? Chris Perez?

The Cards are in a fiercely competitive NL Central Division, so taking aim at the Wild Card seems more reasonable for the time being. But I see too many questions surrounding this club to think 90 wins is possible. Still, if everything breaks right – the offense continues to get surprising performances, the rotation holds up, the bullpen picture clarifies itself, and perhaps Colby Rasmus provides a Ryan Braun-type kick in the ass to the team – St. Louis can take the next step.

The Cardinals had plenty of things to deal with this offseason, with eight free agents on the books – at least half of which who were key players on the team last season – yet they opted to let every single one of them walk away.

Juan Encarnacion, OF: Encarnacion hasn’t played since getting hit with a foul ball in August 2007, and for all intents and purposes, his career is over. In 11 seasons, Little Juan played 1,259 games and accumulated 4,685 at bats, smacking 156 homers and finishing as a lifetime .270 hitter.

Jason Isringhausen, RHP: Isringhausen imploded in 2008, surrendering too many long balls, getting hurt and ultimately losing his long-time job as the Cardinal closer. As good as he was in 2007, Izzy was simply awful in 2008, allowing opponents to hit 100 points higher against him. The veteran was signed to a minor league deal by the Rays, and while he’s thrown well so far this spring, he’s yet to make his game debut, so there’s certainly no guarantee he’ll get a gig in the Tampa Bay pen. Back in St. Louis, Jason Motte will close to start the season, but who knows how long that will last.

Cesar Izturis, SS: Izturis got more action in 2008 than he’s had in a couple of seasons, and although he barely mustered any extra-base pop, he had some value in an NL-only league based on his speed and counting stats. Currently playing with the Venezuelan team at the WBC, Izturus is a great defender who Baltimore pegged to solve its shortstop woes for two years and $5 million. Khalil Greene has been brought in to replace him.

Braden Looper, RHP: Looper rode improved control and sharpened command to a one-year, $5.5 million deal (with an option for 2010) from the Brewers. This is Milwaukee’s answer to losing C.C. Sabathia and Ben Sheets, and so far, Looper is doing his best Sheets’ impression, suffering from an oblique strain this spring. However, he’s on the comeback trail now and has looked good throwing to live batters this week, so he’s supposedly still on track to start Milwaukee’s home opener. A healthy Carpenter (is that an oxymoron?) will take Looper’s rotation spot.

Felipe Lopez, 2B: Lopez rode a big second half to wind up having a pretty solid season in 2008. Although his patience continues to decline, we think he’s going to be a cheap source of steals. Arizona decided to take a shot on him, bringing in Lopez for one year at $3.5 million. Lopez, who played with Puerto Rico in the WBC, will bat leadoff for the D-Backs, and remember, this dude used to be pretty damned good. Can he continue to bounce back in the desert? The Cards are using Schumaker to replace Lopez at second, but so far, it’s an experiment that is failing.

Mark Mulder, LHP: Agent Mulder, the one time A’s ace, has made exactly 21 major league starts in the last three seasons combined. Sure, he looked good in a minor league rehab assignment in June, but so what? He says he’s almost ready to audition for major league teams, and Oakland is supposedly interested, but there’s been little progress on that front. Clearly, Mulder has a long road back.

Russ Springer, RHP: Springer’s K rate dipped and his walk rate rose despite a smaller workload in 2008. Regardless, the veteran middle reliever’s results remained strong enough to draw a one year, $3.3 million deal from Oakland. Sure, he’s 40 now, but Springer remains a solid set-up option and he pitched well enough last season to garner a bit of NL-only league love.

Ron Villone, LHP: Villone got plenty of work as a situational lefty in the Cardinal bullpen, and while he was a bit easier to hit and suffered from a control breakdown, he made up for that to an extent by fanning a batter per inning. Mitchell Report boy Villone was signed to a minor league deal by the Mets, and he’s competing with Casey Fossum to be the second left-handed set-up man in a revamped New York pen. The Cards added Trever Miller to replace Villone.

Next: We’ll head out to the West coast to check in on San Diego and San Francisco.

By RotoRob
This entry was posted on Sunday, March 15th, 2009 at 11:04 am and is filed under BASEBALL, Free agents, RotoRob. You can follow any responses to this entry through the RSS 2.0 feed. You can leave a response, or trackback from your own site.