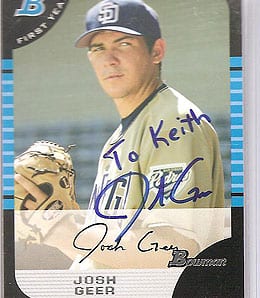 Does a Josh Geer autographed card excite you? Maybe you also think the Padres won’t lose 100 games this year.

We’re just a couple of weeks away from games that count, Cole Hamels’ owners are worrying and Hideki Matsui will be severely limited for the first half of the season.

And we’re on the home stretch of our Free Agency Report. In case you missed some of this seemingly never-ending series, here you go:

The Padres were ridiculously bad in 2008, sporting the worst offense in the National League and a pitching staff that was middling at best. Expecting a step forward in 2009 is foolhardy; in fact, assuming that Jake Peavy is finally dealt (he was almost sent packing this offseason), this team will have a hell of a time avoiding 100 losses.

After Peavy, Chris Young is a solid No. 2 starter, although he’s experiencing some tendonitis this spring. After that, the rotation is one huge question mark. For instance, check out these household names competing for the fifth starter job: Josh Geer, Cesar Ramos, Walter Silva. Getting exciting yet? Uh, ya.

Just imagine if young superstar Adrian Gonzalez were to miss an extended period of time. He completely drives the Padre offense, such that it is; without him, they’d have a tough time outhitting a Triple-A team.

But surely there’s help on the horizon, right? Um….a bit, but not much. Top prospect Kyle Blanks is blocked by Gonzalez so will need to learn the outfield to take the next step. Outfielder Will Venable was impressive last season, and is ready should an injury strike, but he doesn’t offer a ton of upside. After flopping badly last season, second baseman Matt Antonelli looks ready to stick in the Show this season, but with David Eckstein now in town, he’s blocked, unless the club opts to shift Eckstein to shortstop. The rest of the Padre top prospects need more seasoning.

Trevor Hoffman, RHP: Hoffman got hurt last season, yet still managed his fifth straight 30-save season – the 13th time in total he’s reached that plateau. The Padres opted to let him walk, and Milwaukee inked him for one year and $6 million in the hopes he would shore up its bullpen. The thing is, Hoffman is now 41, so expect more wear and tear to crop up – he’s already dealing with a strained oblique this spring and has been slow to recover. He’s going around the 19th round in most drafts, but don’t think about reaching for Hoffman until more dependable closing options are off the board.

Mark Prior, RHP: We certainly weren’t shocked when Prior couldn’t make it back to the majors last year, ultimately succumbing to yet another shoulder operation in June. The Padres decided to throw another $1 million at him, re-signing Prior to a minor league deal, but we still have no idea when or if he’ll ever be healthy again. He last started a big league game three years ago, and while it would be very nice to see Prior make it back, your betting dollar would be better spent elsewhere.

Next: We’ll take a drive up the California coast to San Francisco and check in on the Giants.

By RotoRob
This entry was posted on Wednesday, March 18th, 2009 at 4:08 pm and is filed under BASEBALL, Free agents, RotoRob. You can follow any responses to this entry through the RSS 2.0 feed. You can skip to the end and leave a response. Pinging is currently not allowed.