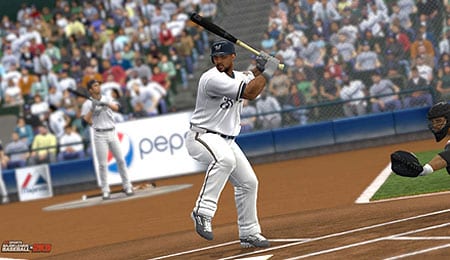 Damn, is it possible that Prince Fielder looks slimmer even in MLB 2K9? Now, that’s impressive.

I have been playing America’s pasttime in video game form dating all the way back to “Baseball” on the original Nintendo Entertainment System. That gave way to RBI Baseball, Bases Loaded and so on and so forth, culminating most recently with 2k Sports’ MLB 2k9, which represented my first dose of baseball on the current generation of consoles (last year I chose to go the portable route with MLB ’08: The Show on my trusty PSP), and while 2k9 is not a perfect game, it does a lot of things right.

Much like 2k’s NBA game, controls are assigned to the right and left sticks for hitting, pitching and fielding. For hitting, you push the right stick down and then snap it up to execute your swing while using the left stick to aim where you want to hit the ball. For example, pushing the left stick up and to the right will cause your hitter to attempt to hit a fly ball to right field. Down and left and you’re more apt to cue the ball on the ground toward the left side of the infield. Bunting is executed by pressing the X button and then using the sticks to put bat to ball and aim which side you want to drop it. I definitely enjoyed the hitting interface, though I think they made it a little too simplistic to influence where a ball is hit. If you’re behind on a pitch you should go opposite field more often than not, whereas if you’re early you should pull the ball. While I’m not saying if you’re late on a pitch outside the zone in 2k9 that you’ll still pull it with authority, it’s just that it’s a bit too easy to control the destination of a batted ball.

When it comes to pitching, you’ll be using the left stick to choose where to aim your pitch while the right stick controls the delivery. Once you start your motion, you’ll hold the stick down while a meter fills – release it when it’s full and your pitch will be highly effective, release it too early or too late and watch a hanging Uncle Charlie disappear into the stands. The game does an excellent job of varying the motions of the right stick to execute the pitches. Throwing a standard four-seam fastball is simple, down to start the motion and up to deliver the pitch, but tossing a slider involves rotating the stick while a change-up inverts the motion of the fastball. It’s well done and keeps things fresh when you’re on the bump. The catcher will call for the pitch and location he wants, and it’s up to you if you want to deliver it there. You can shake him off by pressing A, but you might still not get the pitch you want called. Ultimately you can throw whatever you want, though you’ll be increasing the risk of passed balls since the catcher is looking for the pitch he called.

The fielding controls aren’t bad, but the right stick doesn’t translate as well as it does to the other two elements. However, you can bypass that by using the face buttons to throw to the corresponding bases. While fielding works well most of the time, I did find instances where my player seemed to be in perfect position to make the catch only to watch the ball drop right next to him or sail over his head. I also thought that far too many balls were falling in front of my outfielders and that their initial reaction wasn’t quick enough as they’d almost get locked into a dropped frame rate animation where they were clearly going to play the ball on the hop. I also saw my first baseman come off the bag too often. My final gripe with the fielding is the throwing meter – you hold it down and release it when it’s in the green for a perfect throw – as I didn’t feel it was responsive or consistent enough. Sometimes I would hold down the button and nothing would happen since the game wasn’t ready for the meter to appear and other times it would be almost instantaneous, which led to some poor throws.

Overall, however, I found the controls to be a strong point of 2k9 and with some moderate tweaking they could go from very good to excellent by 2010.

In the interest of full disclosure, let me say that I upgraded to a 42-inch HDTV a couple months back, which makes MLB 2k9 only the second sports title (NHL ’09 being the other) I’ve played in high definition. That being said, MLB 2k9 looks gorgeous at times. Some of the angles shown during the game’s presentation (which is set up to look like a TV broadcast) could fool you into thinking you’re watching a real game. I love the little touches 2k Sports has worked into the game that give it an authentic feel and, unlike its NBA game, the crowd is borderline lively. They’ll stand during crucial situations – like if the home team is one strike from winning – and even react to foul balls.

The animations are pretty smooth and varied, though the frame rate tends to drop during the fielding portion of the game and makes things a bit choppy at times. Things get downright ugly when it comes to player faces, however, with some guys looking like they’ve had several thick layers of putty or wax applied to their face. Just check out Jason Giambi. It’s not universal, but it’s pretty common.

Calling the action in 2k9 are Gary Thorne and Steve Phillips, who do a good job on commentary, but there were certainly times when what they were saying didn’t reflect what was going on in the game. When it’s on, it’s on, but when it’s off it can be a little distracting. The rest of the audio is rock solid with realistic sound effects and crowd noise. Just like with the visuals, the crowd grows louder in key moments and it adds a lot to the flow of the game.

If you’ve played video baseball games before you’ll notice rather quickly that the default difficulty is far too easy as you watch pitch after pitch sail over the bleachers. However, by the same token, you may find the higher difficulties too challenging. This can be remedied by adjusting the numerous sliders to create your ideal experience, and if you feel overwhelmed at tackling it yourself, you can download customized sliders online through 2k Share. It may take some tweaking, but eventually you should arrive at the proper balance to fit your taste.

When it’s time to take the field you’re given a few options: a quick match, postseason (all the fun of October without the work of having to get there), home run derby and franchise. Obviously, most will probably be spending their time leading their favourite club in franchise mode, and 2k9 delivers a bit of a mixed bag in that regard. One highlight is the ability to save at any point during a game and pick right back up where you left off later. It works flawlessly and is a tremendous feature.

The development team used the NBA 2k9 interface here, right down to utilizing the right stick to navigate the menus. MLB.com will serve as your homepage and from there you’ll access all the statistical information. The GM tab represents the meat and potatoes of the franchise experience, giving you access to full major and minor league rosters, free agents and trades. You’ll also be introduced to “Inside Edge” here, which gives you the ability to purchase detailed scouting reports on opposing clubs to learn tendencies and how players respond in a given situation. Each team’s Inside Edge report costs a predetermined amount of money (teams within your division cost more) and is subtracted from your overall budget. That means if you max out your budget on player contracts you’ll be forced to do without advanced scouting.

The trade and free agency areas work solidly, though at times the AI will make deals that would never happen in real life – of course, sports video games have been allowing those since the dawn of time. When it comes to negotiating with free agents, each prospective addition is given four meters to indicate which factors are important to them: money, team prestige, chance to win and playing time. Those items then dictate how receptive the player will be to an offer. For instance, a shortstop looking for a starting job won’t be too quick to sign with the Florida Marlins unless Hanley Ramirez is elsewhere. It’s a cool feature and one that works well – I would’ve liked to see something like that in their more in-depth GM simulation MLB Front Office. On the downside, I found very little talent available in free agency following my first and second seasons, to the point that after my second year there was nary a free agent above an 80 rating. Now, the sample size is too small to classify this as a universal issue, but it was a bit strange.

MLB 2k9 also features online play, which was hit or miss in my experience. When both people had strong connections there was minimal lag, but things could get wonky in a hurry if either player was running a bit slowly. It’s certainly not 2k’s fault, though in a game that’s simulating a quick twitch action like swinging at a 95 mph heater the issues are magnified. Online connectivity is also necessary to take advantage of 2k’s living roster feature, which updates moves when they happen. You can also create and upload clips with 2k’s Reel Maker.

In terms of extras you can unlock and collect trading cards by accomplishing specific criteria (i.e., go deep twice in a game with Ryan Braun and unlock Braun’s trading card), but they’re primarily for show and if you do elect to enable sliders you’re no longer eligible to earn the cards.

One thing that I should mention is that the first time I booted this game up a patch was downloaded onto my system, so if you’re someone who doesn’t have access to Xbox Live you may encounter issues/glitches that I did not. Plus, even with the patch, I still found some areas in need of immediate improvement, most notably my ability to pick off nearly anyone that reached second base against me.

However, even with some lingering bugs and imperfections, this game does a very good job of creating the experience of a major league game and the controls (arguably the most important part of any sports game) are the game’s high point. That makes MLB 2k9 a game I think most Xbox 360 owners looking for a quality baseball experience will find to be enjoyable.

By Herija Green
Tags: MLB
This entry was posted on Tuesday, March 17th, 2009 at 9:19 pm and is filed under BASEBALL, Herija Green, Video Game Reviews. You can follow any responses to this entry through the RSS 2.0 feed. Both comments and pings are currently closed.