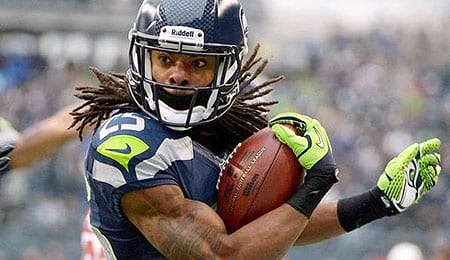 Richard Sherman lost his shit in front of the world. (Foxsports)

On this week’s episode of RotoRob Fantasy Football Weekly Podcast, heard every Wednesday at 2 p.m. EST on Blogtalkradio, Nick Wagner and Josh Johnson were joined by Brandon Folsom of Ubbullrun.com and MLive.com and Chris Vannini of TheOnlyColors.com.

Among the topics we dissected:

Click the play button below to enjoy all the Fantasy football fun and frivolity! Next week, we will be starting a half hour earlier as we’re holding a special Super Bowl Roundtable, featuring:

Now it’s your turn. Let us know in the comments below what you thought of the Podcast. Did you agree or did it send you into a blind rage?

By Josh Johnson
Tags: Seattle Seahawks
This entry was posted on Thursday, January 23rd, 2014 at 6:38 pm and is filed under FOOTBALL, Josh Johnson, Nick Wagner, Podcast, RotoRob Fantasy Football Weekly. You can follow any responses to this entry through the RSS 2.0 feed. Both comments and pings are currently closed.