The Wire Troll: Kris Russell Could Get Early PT Boost 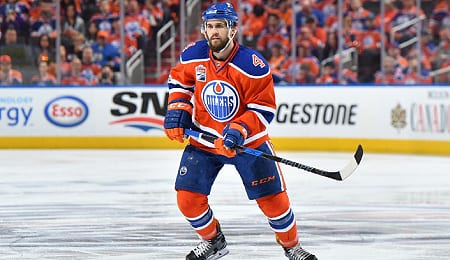 Welcome back to another season of Fantasy hockey advice. In each installment of the NHL Wire Troll we will bring you our waiver wire recommendations of the week, often focusing on category-specific targets, but always ensuring they are widely available in your league (owned in a maximum of 50 per cent of ESPN and CBS leagues).

This week, the Hawks rewarded Alex DeBrincat with a three-year, $19.2 million extension; the Blues raised the banner honouring their first ever Stanley Cup; and John Tavares has been named the 25th captain in Maple Leafs history.

And now, let’s get to our first batch of Fantasy hockey waiver wire picks of the season…

Kris Russell, D, Edmonton Oilers (ESPN: 0.4 per cent; CBS: 3 per cent): It’s been a few years since Russell was a waiver wire recommendation, but with Adam Larsson out 6-to-8 weeks with broken leg, it’s reasonable to expect Russell to get more PT. Part of a strong group of left side defensemen in Edmonton, Russell dealt with some concussion issues in training camp, but is now healthy, looking to build off a nice comeback last season when he went +5 for a poor Oilers squad. If you’re in need of shot blocking help, this is your man; five times he’s topped 200 (including a league-leading 213 in 2016-17) and likely would have done so last season had he not missed 10 games. Although he generally doesn’t accumulate many penalty minutes, every now and then Russell can also throw it down (see video below).

Alexandar Georgiev, G, New York Rangers (ESPN: 4.8 per cent; CBS: 21 per cent): Henrik Lundqvist is still the man for the Rangers, but this is a rebuilding team, and he’s not getting any younger. Last season, Georgiev made a career-high 30 starts, and it’s not inconceivable that he sees even more action this season. However, it’s worth noting that the Rangers have a very sparse early-season schedule, so this pickup may not really start paying dividends in full until next month.

Victor Olofsson, LW, Buffalo Sabres (ESPN: 10.9 per cent; CBS: 40 per cent): After averaging nearly a point per game in the AHL last season, Olofsson is now ready to fly in the NHL, and he’s getting a golden opportunity given the chemistry he’s developed with Jack Eichel. Olofsson logged an assist and went +1 with a couple of shots in the season debut, and has a chance to be one of waiver wire steals of the season because of his potential.

Alexander Nylander, RW, Chicago Blackhawks (ESPN: 6.7 per cent; CBS: 39 per cent): Another youngster with a boatload of potential, Nylander looked really dangerous in the Hawks’ season debut, taking advantage of a turnover and then using the screen nicely for a goal. Remember that this dude went eighth overall in 2016, but after failing to make much of an impact for the Sabres, he was dealt to Chicago in early July. It’s a great move for Nylander, and he’s far more likely to see significant action for the Hawks (getting over 15 minutes in the first game).

Laurent Brossoit, G, Winnipeg Jets (ESPN: 3 per cent; CBS: 12 per cent): Okay, Brossoit didn’t look so hot in his season debut on Friday, getting pulled early in the third period. But last season he was one of the better backups in the league, and enjoyed a fine bounce back effort with a sweet .925 save percentage and very solid 2.52 GAA. Considering how bad starter Connor Hellebuyck looked in the season opener, this situation bears watching.

Here’s another track from Pink Floyd‘s The Wall, released on Harvest and Columbia. This is “One of My Turns,” the classic about Pink locking himself in his hotel room before the depression really kicks in.

By RotoRob
Tags: Kris Russell
This entry was posted on Saturday, October 5th, 2019 at 4:25 pm and is filed under HOCKEY, RotoRob, The Wire Troll. You can follow any responses to this entry through the RSS 2.0 feed. Both comments and pings are currently closed.