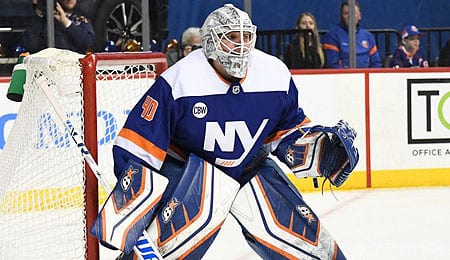 The 2018-19 Fantasy hockey season is in the books, folks. Here’s hoping you had a great campaign and that our waiver wire picks helped you kick some ass.

Oh sure, we had plenty of misses among our picks, and because of the bi-weekly nature of our column (for most of the season, anyway), it means that some hot free agents get scooped up days before we can tout them. But the fact is that if you managed to wind up with, say, two or three of these guys on your team, chances are you were a pretty happy camper this season.

The dates in parentheses represent when we recommended each player.

Robin Lehner, G, New York Islanders (Week Two): A season after finishing dead last in goals against, the Islanders won the Jennings Trophy for the lowest goals against, and Lehner was a huge part of this turnaround. Last season, he didn’t see as many starts as Buffalo’s No. 1 goalie and — having worn out his welcome with the Sabres — wound up signing with the Isles as a free agent last summer. This turned out to be one of the better moves of the offseason, as he shone in a slightly lesser role with New York, racking up six shutouts and 25 wins in a career season. Lehner put together 26 quality starts in just 43 total starts, for a very impressive quality start percentage of over 60. And best of all, he’s a good guy (see video below).

Alex Tuch, RW, Vegas Golden Knights (Week Four): Vegas gave some of its younger players a chance to shine this season, and none of them excelled like Tuch did. Although he cooled a bit in the second half, from November through the end of January he was fantastic, scoring 14 goals with 23 assists for 37 points over a 35-game span. If you took our advice in Week Four and rode Tuch over that stretch, kudos to you. For the season, he reached 20 goals for the first time, becoming a key man on the Knights’ third line. Man, the Wild must be kicking itself for losing such a big, talented kid like this.

David Rittich, G, Calgary Flames (Week Seven): Calgary was the best team in the Western Conference this season, and a big part of that was the strong play from Rittich, who took over as the team’s top goalie early in January. Appearing in a career-high 45 games this season, he recorded his first career shutout and turned Mike Smith into an afterthought. Rittich finished with a 2.61 GAA and .911 save percentage — pretty sweet numbers available on the wire a couple of months into the season.

Jordan Binnington, G, St. Louis Blues (Week 16): Binnington had a huge effect on the Blues this season, helping spark a major turnaround that put St. Louis back in the playoffs. The rookie stopped 10 of 11 shootout attempts, including a pair to ensure victory on the final day of the season. All told, Binnington lost just five of his 30 starts, putting up five goose eggs along the way. When the Blues called him up in mid-December, it was a surprise, but they had already given up five goals or more eight times at that point of the season, and really needed something to click. Binnington provided all that and more, proving a fantastic Fantasy find.

Micheal Ferland, LW, Carolina Hurricanes (Week One): We recommended Ferland in the season debut of the NHL Wire Troll and he justified our faith by averaging nearly a point per game over the first month. He slowed down after that, but likely would have set a new career high in points had he not missed 11 games. Ferland’s CF percentage rose for the fourth straight season, reaching a new career high of 53.6.

Alexander Edler, D, Vancouver Canucks (Week 11): The big physical Canuck defenseman finished strong, logging two assists in the finale to give him a goal and three helpers over the final five games and 5-6-11 for 14 March games. So despite missing 26 games with injury, Edler reached double digit goals for the third time and first since 2011-12. In fact, with 94 career goals, he passed Mattias Ohlund to become the team’s all-time leader in goals by a defenseman.

Mikko Koskinen, G, Edmonton Oilers (Week Eight): Koskinen was inconsistent down the stretch, but finished strong, saving 30 of 31 shots to lead the Oilers past arch rival Edmonton in the season finale. In returning to the NHL after eight years abroad, he was one of the better stories of the season, taking over as the Oilers’ No. 1 goalie and making Cam Talbot expendable. Koskinen earned 25 wins to become of the top goalie options off the waiver wire. Edmonton has missed the playoffs 12 of the last 13 seasons now, but Koskinen may provide some stability in net going forward.

Ryan Dzingel, C/LW/RW, Ottawa Senators/Columbus Blue Jackets (Week Seven): One of several players the Blue Jackets added at the deadline, Dzingel cooled off after the deal. He had put up 44 points in 57 games for Ottawa, but managed just 12 — including only four goals — in 21 games in Columbus. Still, at 26-30-56, it was easily a career season for Dzingel. When we recommended him in mid-November, we said he just keeps getting better, so was likely to cash in as an UFA this summer.

American singer Roy Orbison churned out classics from 1953 until his death in 1988. In 1968, he released the single “Born to Be Loved By You,” a track that was produced by MGM Records’ Jim Vienneau, who also worked with the likes of Hank Williams, Connie Francis and Conway Twitty.

Now it’s your turn. Let us know in the comments below which Fantasy hockey waiver wire pickups helped you the most this season.

By RotoRob
Tags: NHL
This entry was posted on Sunday, April 7th, 2019 at 6:14 pm and is filed under HOCKEY, RotoRob, The Wire Troll. You can follow any responses to this entry through the RSS 2.0 feed. Both comments and pings are currently closed.