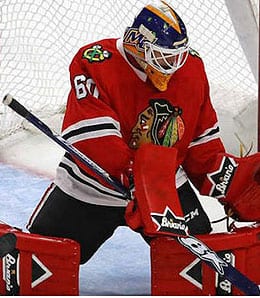 Collin Delia has created some excitement in Chicago. (Twitter.com)

Welcome back to another week of Fantasy hockey. We’re now into mid-January and in about a week and a half, NHL Central Scouting will release its mid-season rankings, a boon for prospect hunters and dynasty league owners.

This week, Sergei Bobrovsky got in some hot water with his team, prompting a benching; Commissioner Gary Bettman has promised the new Seattle franchise that it will get a chance to host both the draft and the All-Star Game within the first seven years of its existence; and Alexander Steen will miss a couple of weeks after suffering a shoulder injury thanks to a punishing hit by Radko Gudas.

Collin Delia, G, Chicago Blackhawks (ESPN: 3.5 per cent; CBS: 28 per cent): Delia has found himself as the main man in net for Chicago right now, and if nothing else, the youngster is facing plenty of rubber. He endured 37 shots on Wednesday, the fourth time in his last five games he’s dealt with that many or more (including games of 50, 48 and 42 shots against). Delia is vastly outplaying veteran Cam Ward, and the youngster seems to be establishing himself as the Blackhawks’ goalie of the future with just 15 goals allowed through six games after looking star struck in his two appearances last season. In his season debut on December 21, Delia looked like a different man, stopping 35 of 36 in a 2-1 win, and he’s been a big part of Chicago’s recent improved play that has pushed the team back into the wild card race. Starter Corey Crawford has proved very injury prone in recent seasons, opening the door for Delia, who has shot up the Blackhawks’ prospect list in the last year — not bad for a dude signed as an undrafted free agent. Delia is also a kid with an appreciation for old school stuff (see video below).

Anders Nilsson, G, Ottawa Senators (ESPN: unowned; CBS: 8 per cent): Starting back-to-back games this week, Nilsson showed a bend but don’t break mentality, giving up plenty of juicy rebounds, but only two goals allowed on 67 shots faced over the pair of contests. Recently traded from Vancouver, he now has a chance to play more often and is taking advantage so far, with a 2.25 GAA since joining the Sens. And for what it’s worth, both Nilsson’s Corsi For and Fenwick For percentages have risen since heading east.

Anton Khudobin, G, Dallas Stars (ESPN: 1 per cent; CBS: 15 per cent): Since being drafted by Minnesota in 2004, Khudobin has bounced around in his NHL career despite the fact he’s put up solid numbers everywhere he’s gone. Now with Dallas, he looked superb on Thursday, thwarting multiple odd man rushes by the Flyers to keep the Stars in the game. In his two previous games, Khodobin stopped all 49 shots in a shutout win against Nashville, and turned aside 36 of 37 to beat Washington. The veteran is worth a look in very deep formats.

The late Buddy Miles was a well-traveled drummer, having been an original member of The Electric Flag and doing a stint in Jimi Hendrix‘s Band of Gypsys. As a solo artist, Miles’ debut album from 1970, Them Changes, made it into the top 10 of jazz albums for the year. From this effort comes “Dreams,” a cover of the classic Allman Brothers tune.

By RotoRob
Tags: Chicago Blackhawks, Collin Delia, Fantasy Hockey, NHL, NHL Central Scouting
This entry was posted on Saturday, January 12th, 2019 at 2:29 pm and is filed under HOCKEY, RotoRob, The Wire Troll. You can follow any responses to this entry through the RSS 2.0 feed. Both comments and pings are currently closed.