Minor Matters: Leonys Martin Living up to the Hype 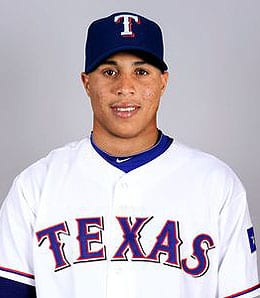 Leonys Martin tore it up at Double-A.

It’s high time for us to take a quick look at some of our favourite young players that are currently plying their trade down on the farm. Leonys Martin captured our attention immediately upon defecting and Tom Milone has been our underdog favourite for a while now. Toss in a young southpaw and a future lead-off speed demon in Toronto and it makes for a very interesting group. Without further ado, let’s see what this fine group of prospects has to offer.

Leonys Martin, OF, Texas Rangers: The Rangers recently made a foray into the International market, outbidding the Boston Red Sox for the services of 23-year-old Cuban ex-pat Martin. He signed a five-year deal worth $15.5 million with a $5 million signing bonus. The scouting reports indicated he had a strong arm with plus speed and line drive potential. Martin was immediately dispatched to the Double-A Frisco Roughriders in the Texas League. He made his debut May 12 and certainly lived up to all expectations, smacking four homers with 24 RBI, 10 steals and a sweet .348 BA in 112 at-bats.

What has really caught our attention is his batting eye, with 15 walks against only eight strikeouts. He missed two weeks in June with a slight herniated disc in his back but upon his return didn’t skip a beat and was selected to play in the Texas League Mid-Season All Star Game. Last week Martin was promoted to Triple-A Round Rock and don’t be surprised to see the young phenom wearing a Rangers uniform before season’s end — especially if Julio Borbon needs surgery.

Martin has a chance to be just what the doctor ordered for the Rangers — a top-of-the-order bat to complement Elvis Andrus with the likes of Nelson Cruz, Adrian Beltre, and Josh Hamilton hitting behind him.

Tom Milone, SP, Washington Nationals: Milone was selected by the Nats in the 10th round in 2008 out of the University of Southern California. The 24-year-old southpaw has jumped a level without skipping a beat every year since his inaugural pro season in 2008. Milone sports a fastball that sits in the 88 mph range, a great changeup and a cutter. Since adding the latter offering to his repertoire, he has seen a marked improvement in his strikeout rate and last year was named the Nationals’ Minor League Pitcher of the Year.

This season, Milone was promoted to Triple-A Syracuse and after struggling out of the gate in April (1-3 with a 5.40 ERA and 30 hits in 21 2/3 IP), he has elevated his game and been on a tear. He currently sports a 7-5 record and in 103 IP has allowed 92 hits, with seven — no that’s not a typo — seven walks, and has struck out 107 while posting a stellar 3.15 ERA. In the process, Milone has held the opposition to a measly .233 BA. He’s currently sporting a mind-boggling 15.3 K/BB ratio that even Cliff Lee is jealous of.

These are outstanding numbers, but let’s dig just a bit deeper. In his past 10 starts going back to May 21, Milone is 5-2 with a 2.57 ERA and has allowed 53 hits and four walks in 66 2/3 IP with 72 punchouts while holding the opposition to a miniscule .209 BA. He currently leads the International League in strikeouts, is eighth in ERA, and is the proud owner of the best WHIP in the league. A rather impressive feat for a pitcher that doesn’t hit 90 mph with his heater, wouldn’t you say?

Finally, last week CBS added him to its player database (a sure fire sign that a player has arrived), but he’s still not listed in either the ESPN or Yahoo! player pools. Milone is the Rodney Dangerfield of pitchers. Despite consistently upping his game and pitching at a high level he simply gets no respect. Based on his 2011 results, expect that to change very soon.

Eric Surkamp, SP, San Francisco Giants: It looks like this is another budding star staking his claim to fame at Double-A Richmond, home of the Flying Squirrels. Just what the San Francisco Giants need, more quality starting pitching. Surkamp, a 24-year-old southpaw, has allowed 77 hits and 30 walks with 114 strikeouts in 96 1/3 IP, recording a sparkling 1.78 ERA. Batters are hitting a measly .221 against him in the first half. In his last start against Trenton, Surkamp entered in the third inning to complete a suspended game and struck out 11 batters over 5 2/3 IP. Eight of the last nine batters he got out were strikeout victims.

In his past 10 starts, Surkamp has allowed a total of 13 earned runs — five of which occurred in a blow up June 3 against Reading. A move to Triple-A has to be right around the corner for the young phenom and you just know he will be a hot topic of discussion should the Giants look to make a move in an effort to boost their rather anemic offense for the stretch run.

Anthony Gose, OF, Toronto Blue Jays: Gose was chosen by the Philadelphia Phillies in the second round of the 2008 draft. He was part of the package Houston received for Roy Oswalt and was immediately flipped to the Jays for Brett Wallace. Blue Jays GM Alex Anthopoulos had coveted the speedy outfielder for some time and finally got his man. Gose finished the 2010 season first in the Florida State League with 45 stolen bases, but was caught a whopping 32 times. This year at Double-A New Hampshire he has nine homers and 39 RBI in 299 at-bats and is a much improved 40-for-51 in the stolen base department. The Jays haven’t had a consistent lead-off threat since Shannon Stewart — or at least the early Stewart days — and the young outfielder who won’t turn 21 until August appears poised to fill that role for the Blue Birds.

By Tim McLeod
Tags: Leonys Martin
This entry was posted on Saturday, July 16th, 2011 at 12:26 pm and is filed under BASEBALL, Minor Matters, Prospects, Tim McLeod. You can follow any responses to this entry through the RSS 2.0 feed. Both comments and pings are currently closed.