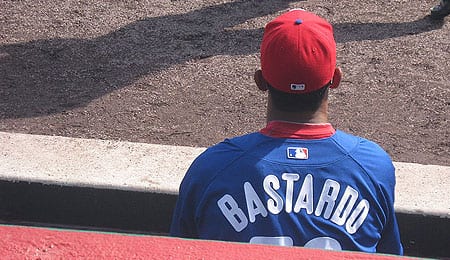 Looking for saves? Don’t turn your back on the Phils’ new closer.

Inter-league play is finally winding down and not soon enough for the Fantasy owner. David Ortiz and Billy Butler owners can finally breathe a sigh of relief as we head into the break. The injuries continue to mount with three of the best in the game being among the latest casualties. Let’s just hope that Victor Martinez, Jose Reyes, and Ryan Braun don’t miss significant amounts of playing time as they are all enjoying amazing 2011 campaigns. Without further ado, let’s see if we can find some diamonds in the rough as we head into the final week before the All Star break.

Antonio Bastardo, RP, Philadelphia Phillies (CBS: 36 per cent owned, Yahoo!: 43 per cent): The latest injury to the Philly pen has sent Ryan Madson to the DL with hand woes. With the third Phillie closer going down, the job has fallen to 25-year-old southpaw Bastardo, who has been enjoying an amazing year, allowing only 11 hits and 13 walks in 30 IP. Toss in those 34 strikeouts, the 0.90 ERA and 0.80 WHIP and you the makings of a stud reliever. Bastardo hasn’t allowed an earned run going all the way back to May 25 against the Reds. Last week he earned back-to-back saves against the Red Sox and Jays and doesn’t look out of place in his new role. Note that his stint as closer could be a rather short one with both Madson and Brad Lidge possibly returning after the break, but even if he’s not earning saves, Bastardo will provide value in all formats with those outstanding peripherals.

Lonnie Chisenhall, 3B, Cleveland Indians (CBS: 31 per cent owned, Yahoo!: 10 per cent): There is cause for excitement in Cleveland. It’s the beginning of July and despite their middling play of late, the Indians are still leading the AL Central. One of the team’s top prospects, Chisenhall got the call at the beginning of last week and has gone 5-for-16 with an RBI. Just remember that the man he’s replacing, Jack Hannahan, hit southpaws to the tune of two homers, 10 RBI and a .309 BA. Meanwhile, Chisenhall hit a rather anemic .200 against southpaws at Triple-A Columbus. The kid is the future at the keystone corner for the Tribe, but a job share can’t be ruled out at this time. Bid this week, yes, but bid with some reservations and caution.

Cory Luebke, SP, San Diego Padres (CBS: 19 per cent owned, Yahoo!: 13 per cent): Since Luebke moved into the rotation we’ve now seen two outstanding starts from him, culminating in Saturday’s performance (6 IP, 2 H, 7 K, W) against the Mariners. The 26-year-old southpaw was terrific working out of the pen prior to joining the rotation so his success in a starter role shouldn’t come as a total shock. The 2007 first rounder out of Ohio State has not missed a beat since joining the Padre organization and looks to be a very valuable component in a potentially great starting rotation heading into the second half.

Eric Thames, OF, Toronto Blue Jays (CBS: 7 per cent owned, Yahoo!: 2 per cent): Thames, 24, was absolutely tearing the cover off the ball at Triple-A Las Vegas (seven homers, 45 RBI, five steals, .352 BA, 210 at-bats). The Jays, tiring of the fielding ineptitude of Edwin Encarnacion and the delay caused by uber prospect Brett Lawrie’s slow healing fractured left hand, have moved Jose Bautista to third base, opening up a slot in the outfield for Thames. Hitting in the two hole, Thames has responded in fine fashion, batting .367 BA with two homers, four RBI, and seven runs in 30 at-bats. The PT will be there for at least the next month so spend some of that FAAB and get him rostered in all formats.

David Hernandez, RP, Arizona Diamondbacks (CBS: 17 per cent owned, Yahoo!: 12 per cent): J.J. Putz hit the DL with right elbow tendinitis last week and Arizona is calling upon former Orioles starter Hernandez to fill the void. Hernandez has enjoyed a solid year in the Arizona bullpen, allowing 29 hits and 22 walks in 37 IP with 41 strikeouts and a decent 3.65 ERA. Yes, the walks are high and could be cause for concern, but with Juan Gutierrez on the DL, Sam Demel just activated from the DL Friday, and Aaron Heilman struggling (40 hits in 30 2/3 IP and a 6.46 ERA), the options for saves in the D-Back pen are limited. Arizona is praying that Putz’s stay on the DL is a short one.

David Robertson, RP, New York Yankees (CBS: 9 per cent owned, Yahoo!: 14 per cent): Injuries to both Rafael Soriano and Joba Chamberlain have forced Robertson into the spotlight in New York and he’s responded in fine fashion. In 33 1/3 IP, he’s allowed 23 hits and 20 walks, struck out 53, and is sporting an outstanding 1.08 ERA and 1.29 WHIP. He’s now firmly solidified his role as the set-up man to future Hall of Famer Mariano Rivera and should be rostered in all formats to take advantage of those amazing strikeout rates.

Orlando Cabrera, 2B/SS, Cleveland Indians (CBS: 32 per cent owned, Yahoo!: 24 per cent): In the past week, the 36-year-old veteran is batting 10-for-19 with one homer, two RBI, six runs scored and a stolen base. Cord Phelps owners could be very disappointed with this turn of events.

Bobby Parnell, RP, New York Mets (CBS: 2 per cent owned, Yahoo!: 0 per cent): The rumour mill continues to swirl around Francisco Rodriguez and that huge vesting option in his contract. If he is traded, someone has to move into the role and Parnell — touted as the closer-in-waiting going back to Spring Training — could be that man. Jason Isringhausen is enjoying a remarkable comeback, but at 38 he’s just as likely as K-Rod to find a new home in the next month. In 12 2/3 IP since the beginning of June when he returned from the DL, Parnell has allowed 11 hits, three walks and two earned runs and has struck out 13. If you have the bench space a preemptive strike could provide some very solid returns.

Peter Bourjos, OF, Los Angeles Angels (CBS: 23 per cent owned, Yahoo!: 15 per cent): After an abysmal May in which he struggled to a .176 BA, Bourjos rebounded nicely by hitting a very respectable .329 in June. He’s still mired at the bottom of a rather unspectacular Halos’ batting order, but you would think that with his speed we should eventually see some counting stats to go along with the BA.

Mark Ellis, 2B, Colorado Rockies (CBS: 6 per cent owned, Yahoo!: 2 per cent): That Ellis has got a new lease on life since being dealt to the Rox would be an understatement. In two games since being traded by the A’s he’s gone 6-for-10 with a homer, five RBI, and four runs scored. The Rockies have dispatched both Chris Nelson and Eric Young, Jr. back to the farm, ensuring regular at-bats for Ellis, at least in the short term. Go with that hot hand.

Rich Harden, SP, Oakland Athletics (CBS: 28 per cent owned, Yahoo!: 9 per cent): Harden made his 2011 debut last week against the D-Backs, tossing six solid innings of two-run ball with six strikeouts for the win. The skill set has always been there, unfortunately so have the health issues. A small bid could return dividends, but note that his next start is on Thursday in Texas –a place that’s a risky proposition for anyone, so you might want to keep him inactive for that outing.

Joe Nathan, RP, Minnesota Twins (CBS: 45 per cent owned, Yahoo!: 33 per cent): Matt Capps’ four-run meltdown in the ninth on Saturday resulted in his sixth blown save and the loss should raise a serious red flag. Don’t be at all surprised to see Nathan working his way back into the mix for saves sooner rather than later in the Twin Cities.

Josh Reddick, OF, Boston Red Sox (CBS: 6 per cent owned, Yahoo!: 3 per cent): The BoSox designated Mike Cameron Thursday and Reddick has now played in four consecutive games in which he’s gone 7-for-13 with four runs scored. Carl Crawford is on the DL and J.D. Drew is struggling, so regular at-bats should be in order for the youngster — at least until the All-Star break.

Marlon Byrd, OF, Chicago Cubs (CBS: 30 per cent owned, Yahoo!: 16 per cent): Byrd returned from the DL on Saturday and his strong BA alone makes him a decent injury fill-in for deeper leagues and a must start in NL-only formats.

By Tim McLeod
This entry was posted on Sunday, July 3rd, 2011 at 12:55 pm and is filed under BASEBALL, The Wire Troll, Tim McLeod. You can follow any responses to this entry through the RSS 2.0 feed. You can leave a response, or trackback from your own site.