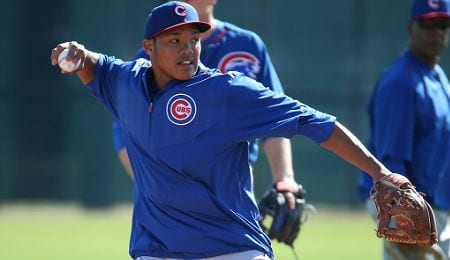 Addison Russell’s hit sent the Cards into a tizzy. (Chicagotribune.com)

Among the topics we quizzed:

Now it’s your turn. Let us know in the comments below what you thought of our Fantasy baseball hallucinations.

The big concern is whether he can he keep the free passes to a minimum. At Triple-A Colorado Springs, Matzek walked 31 batters in 66 2/3 IP (which is actually a massive improvement for him already). If he can keep the walks down he has the potential to be a solid asset for both the Rockies and your Fantasy squad.

Polanco has recently shifted from CF to RF, so yes, we suppose he needed a bit of time to adjust to that. Still, adding Polanco is the kind of move that could spur a turnaround and get the Buccos right back in the playoff chase. Last year, he was extremely productive at High-A, forcing a promotion to Double-A and even a two-game stint at Triple-A. This year, Polanco has already surpassed his homer output from Double-A, while racking up a ridiculous 86 hits in his first 62 games. Signed out of the Dominican in 2010, he’s got tremendous speed (130 steals in 408 minor league games) and the athleticism to become a serious star.

The man they don’t call “JuTu” still deserves some love. To be owned by 0.2 per cent by ESPN owners and just 3 per cent by the CBS nation, the red-bearded super sub is quietly piecing together a nice resume at the plate. He has four multi-hit games in his last seven, upping his season average to .262 with three homers and 12 RBI.