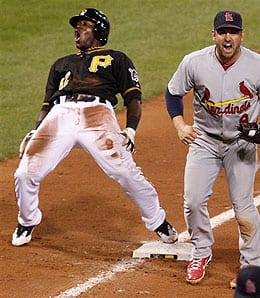 Each Monday in Diamond Stocks, we will look at five players with rising Fantasy stock and five players heading in the opposite direction.

Josh Harrison, RF/3B, Pittsburgh Pirates: The man they call “JayHay” has quietly found success atop the the Buccos lineup, playing nearly every day in right field and occasionally at third base. He hit .317 in May and started off June with a bang, launching his fourth home run of the season. Despite some key hits (see video below), no fantasy owners have taken notice, because he is owned by less than 1 per cent of ESPN leagues and just 9 per cent of CBS leagues. But he has a .294 season average, 817 OPS and is starting to look comfortable at the plate. Note that Gregory Polanco’s impending arrival will render Harrison a backup, but for now he’s worth owning — especially if he gains third base eligibility.

Justin Turner, 3B, Los Angeles Dodgers: The man they don’t call “JuTu” still deserves some love. To be owned by 0.2 per cent by ESPN owners and just 3 per cent by the CBS nation, the red-bearded super sub is quietly piecing together a nice resume at the plate. He has four multi-hit games in his last seven, upping his season average to .262 with three homers and 12 RBI.

Jeremy Guthrie, SP, Kansas City Royals: The only thing that always seems to escape Guthrie is wins. Still, he can always be counted on to post quality numbers despite poor run support, but only 2.2 per cent of ESPN owners and 14 per cent of CBS owners would know that. Guthrie’s season numbers aren’t great – 2-5, 4.00 ERA – but his last three starts have been terrific, as he’s allowed just four earned runs in 20 innings pitched with 12 strikeouts. Alas, he is 0-2 in those starts.

Adeiny Hechaverria, SS, Miami Marlins: Do not count on Hechaverria for power, but he’ll be in the lineup almost every day and lately has been finding some success, hitting in six of his last seven games. For the year, he is batting .267 with 12 RBI despite the fact that he has yet to leave the yard. He does, however, have 11 extra-base hits (eight doubles and three triples).

Hector Noesi, SP, Chicago White Sox: This one is hard to believe, because Noesi at times has looked as hittable as the third base coach that fills in for the first base coach that throws batting practice. To boot, he has awful season numbers (0-4, 5.83 ERA), which is why his ownership numbers are so low – 0 per cent (yes, that’s right) in ESPN leagues and 2 per cent in CBS leagues. But a closer look reveals he might be worth a shot. In his last three outings, Noesi has been steady as she goes, posting a 4.26 ERA and, more importantly, three quality starts. His last start was especially encouraging, as he limited the Indians to just one earned run in 7 1/3 IP, walking none and striking out five. Let’s cut Noesi at least a little slack, as he looks like a possible streaming option.

Jhonny Peralta, SS, St. Louis Cardinals: Though he hit .278 in May, Peralta is starting to resort to his April ways again. He is homerless since May 20, and is batting just .171 in that span. It’d be hard for Peralta’s 86 per cent ESPN ownership (down 8.1 percentage points in the last week) and 83 per cent CBS ownership to simply drop a guy that has nine homers and 24 RBI, but his .232 average and equally disappointing 740 OPS aren’t winning him any brownie points.

Brandon Phillips, 2B, Cincinnati Reds: Not everybody loves Phillips, but everybody – at least in the ESPN world – owns him. In CBS leagues, 85 per cent have him too, but “Dat Dude” hasn’t been dat good in last eight days, with just four hits in 26 at-bats (.154). Phillips had a solid May in which he hit .297, but his power has virtually disappeared, as he has hit just one home run since May 15 and just three on the season. And remember when he snapped at that reporter about his on-base percentage? Well, you may not want to tell him about his 2014 OBP either, which is a paltry .293.

Max Scherzer, SP, Detroit Tigers: For the second straight week, a former Tigers Cy Young starter makes this down list. The universally-owned (in ESPN leagues anyway) Scherzer has been getting hit hard in his last three starts, allowing 16 ER in 19 2/3 IP (7.32 ERA) with three homers, four walks and 16 strikeouts. Is this some sort of post-Cy hangover starting to set in, or just a bump in the road for Mad Max? Scherzer is still 6-2 with a 3.20 ERA on the season, but with Justin Verlander also slumping, the Tigers’ foundation could be starting to crack a little.

Chris Davis, 1B, Baltimore Orioles: “Crush” is fully owned in both legions, but he simply hasn’t turned the corner and seen 2013 yet. He is just 2-for-28 (.071) in his last seven games without a homer, and he’s batting .230 with only seven bombs on the year. Davis hit nearly half of those (three) on May 20 in Pittsburgh, and his .348 OBP is reflective of his team being last in the majors in that category.

Desmond Jennings, CF, Tampa Bay Rays: Jennings has been a bit of an enigma this year, and as the Rays have slumped, so too has the talented outfielder. He is 1-for-14 in his last four games, and despite having 11 steals on the season, Jennings hasn’t swiped a bag in eight games. He is owned by 98.4 per cent of ESPN leagues and 93 per cent of CBS leagues, but batted just .198 in May and has just one homer since May 3.

Now it’s your turn. Let us know in the comments below which players you’re seeing rising or falling.