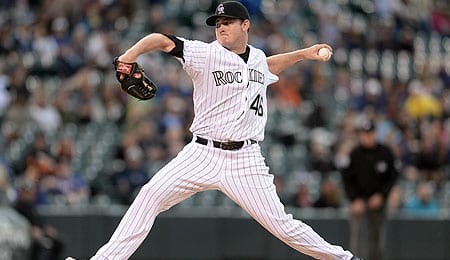 Gregory Polanco has finally arrived and it’s about time. After getting his feet wet in his first three games, he absolutely exploded Friday, going 5-for-7 with three runs, two RBI and his first career homer. He followed that up by going 2-for-5 with a run scored and another two RBI on Saturday and has found a home at the top of the Pirates order. Pittsburgh has won four-of-five games since Polanco’s promotion (hmmm… maybe it should have happened earlier). He’s currently owned in 92 per cent of CBS leagues so if you didn’t buy early you can only watch from the sidelines as the young phenom goes about his business.

Enough of the amazing Polanco. Let’s take a look at this week’s Troll picks.

Tyler Matzek, SP, Colorado Rockies (CBS: 11 per cent owned, ESPN: unowned): The Eddie Butler experiment lasted but one start before he landed on the DL with rotator cuff inflammation. The Rox (who suddenly have a pretty nice stash of young hurlers) then turned to Plan B, and long-time RotoRob muse Matzek responded in fine form. The 23-year-old southpaw won his debut by going seven strong innings, tossing five-hit ball over, allowing only two earned runs and most importantly not walking anyone — for the first time in his professional career. Matzek also fanned seven for good measure and later talked about how he used his nervous energy to embrace the moment (see video below). The big concern is whether he can he keep the free passes to a minimum. At Triple-A Colorado Springs, Matzek walked 31 batters in 66 2/3 IP (which is actually a massive improvement for him already). If he can keep the walks down he has the potential to be a solid asset for both the Rockies and your Fantasy squad.

Brandon Workman, SP, Boston Red Sox (CBS: 9 per cent owned, ESPN: 1 per cent): In his last start, Workman tossed 6 1/3 innings of one-hit ball against a very good Baltimore offense. He has the Tribe up next on Sunday, probably followed by a week off while he serves his time for tossing behind Evan Longoria. Workman is an interesting pickup heading into next week when he could be looking at a favourable matchup in a Sunday start against the suddenly struggling A’s.

Dellin Betances, RP, New York Yankees (CBS: 45 per cent owned, ESPN: 40 per cent): Betances is now up to 65 strikeouts in 38 2/3 IP. He clearly owns the setup role for the Yankees and if you’re looking at the longer-term scenario, closer David Robertson will be a free agent after the season.

Cody Asche, 3B, Philadelphia Phillies (CBS: 13 per cent owned, ESPN: 1 per cent): After an absolutely putrid April, Asche was off to a great start in May before hitting the DL with a strained left hammy. In 60 at-bats last month, he hit three homers with 12 RBI and a .317 BA. Asche could be back as early as next weekend after some minor league rehab time.

Colby Rasmus, OF, Toronto Blue Jays (CBS: 44 per cent owned, ESPN: 25 per cent): Rasmus slugged nine homers in 135 at-bats prior to strained his right hamstring. He’s currently rehabbing at Triple-A Buffalo and is likely to return soon, so don’t ignore his power potential heading into the second half.

A.J. Ellis, C, Los Angeles Dodgers (CBS: 7 per cent owned, ESPN: unowned): First came the knee surgery that cost Ellis five weeks and upon return he sprained his ankle in a home run celebration costing him another two weeks. It’s been a tough start for the Dodgers backstop but he’s coming off back-to-back 52-RBI campaigns and is a worthy buy in two-catcher sets. Ellis’ career .351 OBP warrants bumping him up a notch in formats that track that cat.

Kyle Gibson, SP, Minnesota Twins (CBS: 18 per cent owned, ESPN: 4 per cent): We recommended Gibson back in April after his early season success and, in what’s been an up and down season, he’s currently on the upswing with back-to-back wins and 14 consecutive shutout innings. It’s time to take another look.

Jesus Montero, C, Seattle Mariners (CBS: 11 per cent owned, ESPN: unowned): The Mariners have turned to former uber-prospect Montero to provide some relief while Justin Smoak spends the next couple of weeks on the DL with a quad injury. Montero amassed eight homers and 40 RBI at Triple-A Tacoma, so all is not lost… yet.

Jesse Hahn, SP, San Diego Padres (CBS: 1 per cent owned, ESPN: n/a): In his second start with the Padres, Jesse Hahn (not to be confused with former Jim Bakker harlot Jessica Hahn) tossed six innings of one-hit ball with seven Ks for the win against the Mets. He’s got a solid matchup vs. the Mariners at home in his next start.

Kevin Kiermaier, OF, Tampa Bay Rays (CBS: 5 per cent owned, ESPN: 2 per cent): Wil Myers is going to be lost for at least the next two months with a fractured wrist, providing Kiermaier an opportunity. The outstanding defense will keep him in the game and the speed (11 thefts in 128 at-bats at Triple-A Durham) could prove to be a plus if you’re chasing stolen bases.

Jimmy Nelson, SP, Milwaukee Brewers (CBS: 19 per cent owned, ESPN: Not all the top prospects have been taken. The ongoing struggles of Marco Estrada could prompt the Brewers to give Nelson a second look. Nelson fared well in winning his first appearance (5 2/3 IP, five hits, three walks, six Ks) at the end of May. At Triple-A Nashville, he’s been off the charts good and is now up to seven wins with a 1.51 ERA and 86 strikeouts in 77 2/3 IP. Nelson is ready for the Show.

Joe Smith, RP, Los Angeles Angels (CBS: 22 per cent owned, ESPN: 14 per cent): Angel Closer Ernesto Frieri came unglued Saturday, allowing four earned runs without retiring a batter. Manager Mike Scioscia’s faith in Frieri is well documented and the leash will be long, but you can guarantee that at some point Smith will be good for a save or two.

Crave more in-depth Fantasy analysis? Then join us every Thursday at 9 p.m. EST for RotoRob Fantasy Baseball Weekly Podcast on Blogtalkradio as we entertain and edify you for an hour or more each week. RotoRob will be joined by Joel Henard this week. Tune in here.

By Tim McLeod
Tags: Gregory Polanco
This entry was posted on Sunday, June 15th, 2014 at 4:50 pm and is filed under BASEBALL, The Wire Troll, Tim McLeod. You can follow any responses to this entry through the RSS 2.0 feed. Both comments and pings are currently closed.