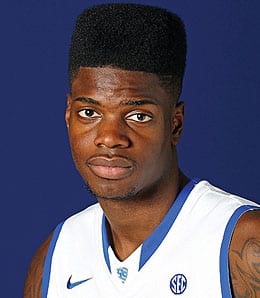 His ‘fro alone should make Nerlens Noel the No. 1 overall pick.

With a hotly contested, back-and-forth NBA Finals winding down, it’s time to turn our attention to the upcoming NBA Draft, which is a mere 10 days away.

For many teams, the draft is an opportunity to turn their franchise around, but 2013 lacks obvious star power. Mostly, it will be about assessing individual team needs as opposed to a best available player approach.

With this in mind, please note that this draft preview does not necessarily factor in specific team needs, but rather is a representation of who we consider to be the top 30 draft prospects this year.

1. Cleveland Cavaliers — Nerlens Noel, C, Kentucky: Depending on who you speak to you, any one of the top half dozen players listed here could go first, but despite a torn ACL that will sideline him until December, most expect Noel (6’11”, 206) to go No. 1. He has the chance to be a serious defensive force as you can see in the video below.

2. Orlando Magic — Ben McLemore, SG, Kansas: Yes, Orlando has another three years of Arron Afflalo, but if the vet is shifted to the three, McLemore will find the PT he needs (at the cost of overall team size, of course).

3. Washington Wizards — Otto Porter, SF, Georgetown: Porter is a fantastic shooter from outside and brings a real energy to the floor that makes him tough to cover.

4. Charlotte Bobcats — Victor Oladipo, SG, Indiana: Oladipo has really soared up the draft chart after averaging 13.6 points and 6.3 rebounds as a junior for the Hoosiers.

5. Phoenix Suns — Alex Len, C, Maryland: Len is another big man dealing with injury issues, as a partial stress fracture in his ankle that required surgery last month could delay his debut next season.

6. New Orleans Pelicans — Anthony Bennett, SF/PF, UNLV: Toronto-born Bennett can score, but there are serious concerns about his defensive intensity.

7. Sacramento Kings — Trey Burke, PG, Michigan: The general assumption has been that the Pistons would take Burke if he’s sitting there at eight, but recent reports suggest they are not that high on him despite how many tickets he’d help them sell. It may be moot, because Burke could easily go before Detroit has to make the tough call of passing up on a Michigan hero.

8. Detroit Pistons — C.J. McCollum, PG/SG, Lehigh: McCollum has been compared to 2012-13 ROY Damian Lillard, but given that he’s not a true PG like Lillard, we don’t see it. Still, that’s an intriguing parallel.

9. Minnesota Timberwolves — Cody Zeller, PF/C, Indiana: Even though they need backcourt help, rumours suggest Detroit likes Zeller, so he may not last until ninth. It’s unclear if he’ll fit as a five or four as a pro, but he is a seven-foot white dude.

10. Portland Trail Blazers — Shabazz Muhammad, SG/SF, UCLA: Four years ago, Muhammad was the number one player in his high school class, but because of the rule changes, he was ineligible for the draft when he graduated in 2012. Unfortunately, he didn’t have the same level of success in college and his draft stock has slipped as a result.

11. Philadelphia 76ers — Michael Carter-Williams, PG, Syracuse: Carter-Williams has nice size for a PG (6’6″) and has impressed plenty of teams during his workouts. His work ethic should make him a lottery pick.

12. Oklahoma City Thunder (from Toronto via Houston) — Kentavious Caldwell-Pope, SG, Georgia: The Georgia sophomore looks like he’ll settle in as a pure two that can shoot the rock.

13. Dallas Mavericks — Steven Adams, C, Pittsburgh: Adams doesn’t get the hype some of this year’s prospects do, but he should be a solid NBA defender capable of pulling down boards and blocking shots.

14. Utah Jazz — Kelly Olynyk, C, Gonzaga: This may be high for Olynyk as his stock has slipped and many now think he won’t be a lottery pick anymore.

16. Boston Celtics — Mason Plumlee, PF, Duke: While Boston could use a centre or a point guard, Plumlee is a top-notch rebounder, pulling down 9.9 boards per game as a senior, good for 16th in the country.

17. Atlanta Hawks — Shane Larkin, PG, Miami: A 5’11” point guard, Larkin could slide enough to be a real steal in this year’s draft. He’s projected as a late first rounder/early second rounder by many, but we believe he’s going to go earlier than that. Larkin has a blazing first step.

18. Atlanta Hawks (from Houston via Brooklyn) — Rudy Gobert, C, France: Don’t overlook Gobert as a late lottery pick even though we think he’ll slide a bit lower than that. Either way, he should be the first international centre off the board.

19. Cleveland Cavaliers (from the Los Angeles Lakers) — Jamaal Franklin, SG/SF, San Diego State: Franklin’s a decently-sized shooting guard (6’5″), but because of an ankle injury, he was unable to work out for teams prior to the draft, so that may slightly hurt his stock.

20. Chicago Bulls — Gorgui Dieng, C, Louisville: A 6″11″ native of Senegal, Dieng hasn’t been getting a ton of press, but man, does he know how to throw a block party.

21. Utah Jazz (from Golden State via Brooklyn) — Sergey Karasev, SG, Russia: Karasev opted to head back to Russia instead of engaging in pre-draft workouts, but the 19-year-old two-guard has not pulled out of the draft.

22. Brooklyn Nets — Giannis Antetokounmpo, SF, Greece: This 18-year-old has flown under the radar as a Greek League prospect, but he could easily go a few picks before this, possibly with one of the Hawks’ back-to-back picks.

23. Indiana Pacers — Tony Mitchell, PF, North Texas: At 6’8″, 235, Mitchell is a bit undersized for a four, but some have compared him to a young Josh Smith.

24. New York Knicks — Lucas Nogueira, C, Brazil: This Brazilian big man (seven feet in shoes) is a project, but “Bebe” is a bundle of energy and he has a tremendous ‘do that nearly rivals another Brazilian beast, Anderson Varejao.

25. Los Angeles Clippers — Allen Crabbe, SG, California: Crabbe has been compared to Wayne Ellington, which isn’t exactly exciting. But the kid can shoot.

26. Minnesota Timberwolves (from Memphis via Houston) — Tim Hardaway, Jr., SG/SF, Michigan: The 6’6″ swingman, who is foregoing his senior season, could be next Danny Green – hopefully the one excelling in the Finals, that is. A more bullish comparison would be Joe Johnson, but we think that’s a stretch.

27. Denver Nuggets — Reggie Bullock, SF, North Carolina: This Tar Heel has been compared to Dahntay Jones, and since he decided to skip his senior campaign, his draft stock has risen nicely. Bullock is nice looking jump shooter.

28. San Antonio Spurs — Jeff Withey, C, Kansas: The Jayhawk big man has been favourably compared to Tyson Chandler as a defensive force. Withey would be ideal as a backup centre to start, as long as the team took a patient approach and allowed him to develop at a comfortable pace.

29. Oklahoma City Thunder — Glen Rice, Jr., SG, NBA D-League: Rice brings plenty of baggage to the table with several incidents at Georgia Tech that led to him being kicked off the team and ultimately opting to play in the D-League. The pro experience should make for an easier transition to the NBA.

30. Phoenix Suns (from Miami via Cleveland and the Los Angeles Lakers) — Tony Snell, SG/SF, New Mexico St.: Snell can shoot it, is a solid rebounder and knows how to play D. The 6’7″, 200-pounder is probably going to be a two-guard in the NBA.

By RotoRob
Tags: Cleveland Cavaliers
This entry was posted on Monday, June 17th, 2013 at 9:27 pm and is filed under BASKETBALL, Draft report, Prospects, RotoRob. You can follow any responses to this entry through the RSS 2.0 feed. Both comments and pings are currently closed.