Closer Watch: Who Will Get Saves for Braves? 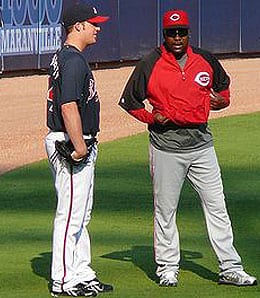 Depending on how things shake out this winter, Eric O’Flaherty (left) could be a very valuable reliever in 2010.

The possibility exists that the Atlanta Braves will lose both Rafael Soriano and Mike Gonzalez to free agency this winter, begging the question who will be earning saves for the Braves in 2010?

Soriano could be headed to the Yankees, but if not, it might be Gonzalez headed there. Gonzalez could also find his way back to Pittsburgh. Either way, it’s quite conceivable they will both be gone from Atlanta.

Billy Wagner’s name has been thrown around as a possible solution, and the veteran reliever certainly proved he was healthy late last year, looking untouchable. He’d come fairly cheaply and has a proven track record.

But if Atlanta can’t land Wagner or another closing candidate through free agency, what about its internal candidates?

Peter Moylan would be the top remaining right-handed reliever, and while I have reported previously about how impressed I was with him, I’m not sure there’s any upside here. Assuming Gonzalez is gone, the Braves’ top lefty remaining will be Eric O’Flaherty – an arm that intrigues me as a closer possibility.

He’s got a bit of experience earning saves in the minors, but mostly in the low minors, earlier in his career. However, his fastball/slider combination and ability to keep the ball in the park interests me. O’Flaherty is a dominant type (although he did average a K per inning at Triple-A in 2008), but he I think he’s got much more potential than simply being a LOOGY type.

Yes, he is nasty against lefties (they hit just .215 against him last year), but it’s not as if he can’t get righties out, limiting them to a 676 OPS last year. That’s not bad, and it stands to reason that this 24-year-old has room to grow in that department.

O’Flaherty originally caught our eye when the Mariners called him up early in 2007 https://rotorob.com/2007/04/25/mariner-mound-misery/, but it wasn’t until this season that he finally settled in as a legitimate major league reliever, enjoying a career year in his first season in Atlanta. The kid’s groundball rates just keep improving (0.67 in 2006, 0.86 in 2007, 1.00 in 2008 and 1.25 this year), a trend that will serve him well as a contact pitcher.

He was somewhat inconsistent in the first half, but O’Flaherty really settled into a groove from July on.

Much can happen between now and Opening Day, but come Spring Training, O’Flaherty is a name that you should be tracking if the closer competition remains open. Another internal, albeit more of a dark horse candidate worth thinking about is minor leaguer Craig Kimbrel, a closer who soared through the system this year despite his serious control issues. In two pro seasons, he’s averaging 15 K/9, but also 5.7 BB/9.

By RotoRob
This entry was posted on Monday, November 30th, 2009 at 1:36 pm and is filed under BASEBALL, RotoRob, Rumours. You can follow any responses to this entry through the RSS 2.0 feed. You can leave a response, or trackback from your own site.