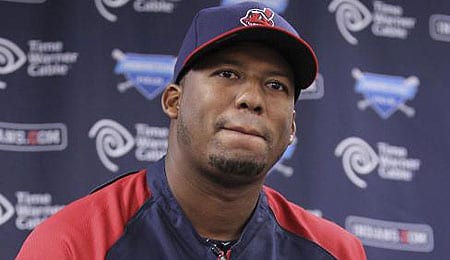 Roberto Hernandez will have to settle for a one-year deal this winter.

In February, we weren’t exactly bullish about Roberto Hernandez’s chances to making an impact this year. The old Fausto Carmona finally did make it back stateside after getting a pardon for identity theft, but he was so badly beaten in his brief time that it prompted the Indians to decline their $6 million 2013 option on him.

So what’s next for Hernandez?

He’s 32 years old and just two years removed from an All-Star appearance. Could this dude be useful again?

Hernandez didn’t even look that sharp in his two Triple-A tune-up starts before getting slaughtered in the bigs. And as bad as his results were, an abnormally low .250 BABIP suggests they could have even worse.

We have complete faith that given enough starts, Hernandez could return to his ways as a consistent double-digit loser.

Arizona, surprisingly, has been linked to Hernandez. The D-Backs are a seriously pitching-rich squad, but several of their younger arms aren’t likely to be ready to contribute until 2014 and Daniel Hudson won’t be ready to return until after the All-Star break. So perhaps on a one-year deal, Hernandez could fit in the desert – and given that he’s willing to accept a one-year deal, his options remain somewhat bountiful.

Don’t think that he couldn’t wind up back in Cleveland, although obviously for less money. Apparently, at the least three other teams are kicking Hernandez’s tires, which magically got three years older in the past 11 months.

Hernandez’s fastball velocity was lower than ever last year, and he wound up going to it less often that ever as well, using it less than two-thirds of the time for the first time. In its stead, he used his slider slightly more, and opted to go with his changeup more often. Hernandez’s split-fingered fastball – an offering he used quite a bit in his breakout, 19-win 2007 season – is a pitch he’s long since discarded, last employing it in 2008.

From a Fantasy perspective, our advice regarding Hernandez hasn’t changed: ignore him until he forces you to pay attention.

By RotoRob
This entry was posted on Tuesday, December 11th, 2012 at 11:11 am and is filed under BASEBALL, Free agents, Player profile, RotoRob, Rumours. You can follow any responses to this entry through the RSS 2.0 feed. Both comments and pings are currently closed.