The Battle For Zack Greinke 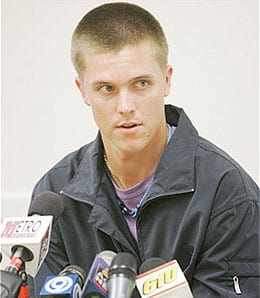 Zack Greinke will strike it rich any day.

The most prized pitcher on the free agent market will soon be an extremely rich dude.

It seems as though either the Los Angeles Dodgers or the Texas Rangers are about to make Zack Greinke just the ninth $100-million pitcher in the history of the game.

Of the course the Dodgers know a thing or two about giving nine-digit contracts to a hurler, having inked the first ever such deal with Kevin Brown back in 1998. The fact that some of these deals blew up monumentally (think Mike Hampton and to a lesser extent Barry Zito) still makes teams very wary about tossing around that kind of coin for such a fragile and fleeting item as a great arm.

But Greinke – and likely his potential new Dodger teammate Clayton Kershaw (about to sign a huge-ass extension that could even make him the game’s first $200-million pitcher) – is most assuredly going to join the $100-million club.

But back to the battle for Greinke. Texas seems to be at the centre of the winter meetings and pretty much every rumour of substance involves the Rangers to some extent.

The meetings reach their conclusion Thursday, so if there’s going to be a spate of major movement, today’s the day.
It’s as if everyone awaits the fate of Greinke (and Josh Hamilton) before jumping in once the market is set. Texas is trying to land both, but it’s far more important for the future of the team to sign Greinke, because he’s much more likely to lead the Rangers back to the promised land. Don’t get us wrong — both players have their own personal demons and baggage, but Greinke is more of a difference-maker from a long-term perspective.

LA remains the apparent frontrunner for Greinke’s services, but many believe if the Rangers want him, he’s theirs’ for the taking.

By RotoRob
This entry was posted on Thursday, December 6th, 2012 at 11:21 am and is filed under BASEBALL, RotoRob, Rumours. You can follow any responses to this entry through the RSS 2.0 feed. Both comments and pings are currently closed.