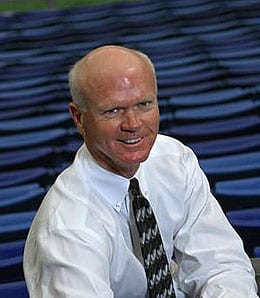 Terry Ryan may be hankering to be a general manager again.

The word on the street is that Terry Ryan, the former general manager of the Minnesota Twins and a current consultant for the team, had interest in the GM position for the Mets, which was awarded to Sandy Alderson last week.

While Ryan didn’t get an interview, you’d have to think if he was legitimately interested in returning to a GM post, the Mets would have wanted to talk to him. Having said that, based on reactions on the Mets’ page on Facebook, the team’s fans are quite stoked about having Alderson as the man charged to turn things around.

Speaking of turning teams around, I’ll be very interested to see how Don Mattingly does as the new manager of the Los Angeles Dodgers. Generally speaking, former star players don’t make good managers because of their inability to relate to average performers. They just don’t get how hard baseball is far normal people. Still, Mattingly must have received a pretty good training for this job, considering he played under some highly successful managers such as Dallas Green, Buck Showalter, Billy Martin and Lou Piniella. He also had a bird’s eye view of other big name managers of his era like Tom Kelly, Jim Leyland and Tony LaRussa. He inherits a club that failed to garner a winning record last season. Can Donny Ball mean a return to their previous winning ways for the Dodgers?

Perhaps the smartest thing San Francisco Giants manager Bruce Bochy did so far was to shift Juan Uribe over to third base and insert Edgar Renteria at shortstop. Pablo Sandoval had not been hitting well in the NLCS and as we all know, he’s no whiz with the glove. Reneteria made the Giants a better defensive team, and he’s gone 6-for-14 with five runs, a homer and three RBI in the World Series so far, surprisingly making them a better offensive team as well.

The second smartest thing Bochy did – although apparently this was just serendipity – was to leave Jose Guillen off the World Series roster. The reason he was left off was because of a sore neck, but when news broke of Guillen’s alleged link to a federal investigation into shipments of PEDs, it saved the Giants from a horribly timed distraction involving an active player.

When Tommy Hunter couldn’t last longer than four innings Sunday, do you think Texas manager Ron Washington was second-guessing his decision to not pitch Cliff Lee on short rest in Game Four? Now the Rangers are a game away from ceding this series to San Francisco and Lee is charged with saving their season instead of trying to tie the series up and reduce it to a best of three.

Milwaukee has been rumoured to be trying to trade Prince Fielder for a while now, but so far there has been no market for the big man. All signs are pointing to Fielder once again manning first base in Sausage City in 2011.

The Twins declined the $5 million 2011 option on Nick Punto, sending him adrift as a free agent, a move that will surely affect the market greatly. Uh, yeah. However, they did pick up Jason Kubel’s option, a wise decision as he enjoyed another productive season despite the fact that his BA was a big disappointment.

By RotoRob
This entry was posted on Monday, November 1st, 2010 at 3:46 pm and is filed under BASEBALL, RotoRob, Rumours. You can follow any responses to this entry through the RSS 2.0 feed. You can leave a response, or trackback from your own site.