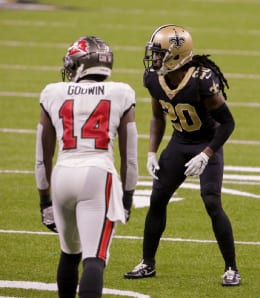 The real winners of Divisional weekend were the viewers. We’ve getting the best matchup possible on Championship Sunday as the top young quarterbacks are likely to clash while a pair of aging veterans hope to go out on top. This week is tricky as the AFC matchup is contingent on the health of Patrick Mahomes. As a result, the odds for the NFL conference championship games here indicate that Kansas City is about a three-point favourite — not as high as we would hope. The NFC is a little less muddled, but seeing how Tampa Bay was the only team that thrashed Green Bay this season, the range of possibility is wide.

Chris Godwin, WR, Tampa Bay Buccaneers: Godwin has been a key feature of the HC Bruce Arians‘ offense during the playoffs, yet has failed to live up to expectations so far, hauling in just nine catches on 19 targets for 133 yards and a touchdown. That’s about to change. Godwin is ready to go off on CB Kevin King and slot CB Chandon Sullivan in the softest draw in the playoff yet. Godwin, who spends close to 60 per cent of his time in the slot, holds distinct speed, agility, height and weight advantages over Sullivan. Expect Tom Brady to lock on to Godwin whenever there is a one-on-one situation, and maybe — this time — Godwin will hold onto the ball (see video below).

Tom Brady, QB, Tampa Bay Buccaneers: Alright, fine… we’re done betting against Brady. Especially this weekend, as he gets a soft draw against a pass defense ranked 15th in DVOA. Moreover, Green Bay has been downright inept at pressuring passers, managing an anemic rate of 14.2 per cent in 2020. If the Packers choose to routinely just send four rushers, the old man will pick the defense apart like he did to New Orleans. While we do expect Arians to lean more on the run game due to the weather in Green Bay, don’’t be surprised if Brady plays out of his mind in the cold weather (he’s plenty used to it).

Davante Adams, WR, Green Bay Packers: The Buccaneers are leaky on the back end and although Marquez Valdes-Scantling and Allen Lazard are incredibly attractive DFS options for their home-run potential, Adams will be the consistent receiver getting catches in key moments in this game (i.e., third downs, end zone). The Bucs have the best rushing defense in the league (which is why we expect Aaron Jones to have a tough time) and the fifth-ranked pass defense in DVOA with cornerbacks Carlton Davis and Sean Murphy-Bunting, the former of whom Adams will see a lot.

Tyreek Hill, WR, Kansas City Chiefs: Regardless if Mahomes plays this weekend or not, Hill’s stock will take a hit. Backup QB Chad Henne offered no relief as he threw six times for 66 yards while coughing up the ugliest interception you will ever see. HC Andy Reid is crafty enough to scheme Hill on shallow, YAC-inducing situations to make it easier on whoever is under centre on Sunday. Even in the optimal scenario in which Mahomes returns to practice, expect some timing issues, especially in the wake of his turf toe.

Aaron Jones, RB, Green Bay Packers: While HC Matt LaFleur‘s conservative nature hurt our predictions, Jones did exactly what we expected by mixing positive and consistent yards with an elite chance of a long run. But Tampa Bay isn’t Los Angeles. DC Todd Bowles has always predicated his schemes on stopping the run first, stressing the secondary in one-on-one or Cover 1 situations. We expect Tampa’s defense to play a heavier front (5-1) to stop both Jones and Aaron Rodgers from getting to the edge.

Josh Allen, QB, Buffalo Bills: With the possibility of losing Mahomes for the championship game, Reid is likely to retool his defense to slow down the Bills rather than deploying their patented bend-don’t-break philosophy. Similar to Tampa Bay, Kansas City is likely to anchor its defensive line with its heavy personnel in order to stop both Devin Singletary and Allen from getting to the edge. Baltimore has given Reid the blueprint to neutralizing Allen by forcing him to be a pocket passer and disguising the secondary coverage. Keep an eye on how Reid employs the Honey Badger, Tyrann Mathieu.

Stunning Belgian singer Axelle Red is known in the real world as Fabienne Demal. She’s been at it since 1993, releasing her second album, A Tatons, in 1996. From this effort comes “Qui Connait la Route,” a song co-penned by noted French songwriter Richard Seff.

As we’ll allude to below, Tampa Bay’s slaughter of awful teams late in the season will be its undoing. In securing the NFC East title, Washington’s mediocre but battle tested team sports a pass defense ranked second in DVOA. Ranking 12th in pressures, Washington differs from a lot of teams by being able to convert that pressure into tackles for loss, sacks and turnovers.

Since winning the World Series in 1988, the Los Angeles Dodgers have returned to the postseason 14 times, including each of the last eight seasons, finally taking home the game’s most coveted prize again on Tuesday.

Reactions to the 2020 Stanley Cup Finals

It’s been several days since the Tampa Bay Lightning wrapped up the second championship in franchise history. It’s high time to offer some observations from an entertaining series.

By RotoRob
Posted in HOCKEY, Playoffs, RotoRob | Comments Off on Reactions to the 2020 Stanley Cup Finals