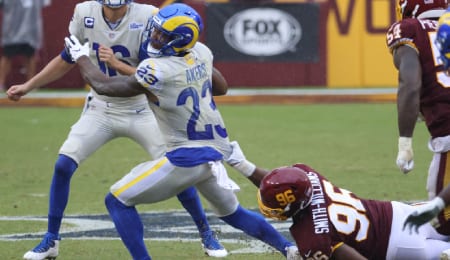 Whether it’s relief or disappointment, the regular season is over and a new campaign has begun. With seven teams in each conference making it to the playoffs, only one club in each conference will receive a first round bye (Kansas City and Green Bay). With the Wild Card schedule set (see below), we at RotoRob.com are still here to help you with your DFS or H2H wagers. Below are a few studs to bank on, as well as a couple of duds to shy away from.

Ryan Tannehill, QB, Tennessee Titans: In completing 65.5 per cent of his 481 pass attempts for 3,819 yards, 33 touchdowns and only seven interceptions, Tannehill not only earned his contract extension but also helped push the Titans through a very tough schedule to the playoffs. After finishing tied for third in EPA/CPOE — as per @Computer Cowboy — (trailing only Aaron Rodgers and Patrick Mahomes), the Titans’ quarterback will match up against a Baltimore defense ranked 10th in pass DVOA and 12th in run DVOA. While this seems daunting, Tannehill will take advantage of Baltimore’s mediocre pressure rate (11th in the NFL).

Washington Football Team D/ST: As we’ll allude to below, Tampa Bay’s slaughter of awful teams late in the season will be its undoing. In securing the NFC East title, Washington’s mediocre but battle tested team sports a pass defense ranked second in DVOA. Ranking 12th in pressures, Washington differs from a lot of teams by being able to convert that pressure into tackles for loss, sacks and turnovers. With Mike Evans possibly sidelined for this game, Washington’s defense can put its mark on Tom Brady.

Antonio Brown, WR, Tampa Bay Buccaneers: AB made our list last week and the week before that, going off for 11 catches for 138 yards and two touchdowns, and five catches for 93 yards and one touchdown, respectively. While it’s ugly to admit, Evans’ possible absence on Sunday will open the door for Brown, Chris Godwin and Scotty Miller. Brady has a tough draw against an elite pass defense (ranked second in pass DVOA), but we anticipate leakier CB Ronald Darby on AB. With 4.38s 40-yard speed and a stingy 88 per cent passer rating, Darby is no slouch, but Brown will make his money on back shoulder fades.

Michael Thomas, WR, New Orleans Saints: Thomas aka Slant Boy, is expected to come off the IR and will have a surprisingly soft draw against Chicago’s 13th ranked pass defense in DVOA. In seven games, Thomas averaged six receptions for 63 yards with a 7.54 yards per attempt. He will get a good matchup against CB Kyle Fuller, who looked dominant early on but ended the year allowing a passer rating of 102.4.

Cam Akers, Darrell Henderson, and Malcolm Brown, RBs, Los Angeles Rams: HC Sean McVay‘s three-headed backfield produced some meaningful statistics over the season through the use of in-motion lateral blocking from Cooper Kupp but failed to cement any running back as the key man in the system. Having played Seattle in Week 16, the backfield of Akers and Brown produced a combined useless line of 19-89-0 on the ground and 1-8-0 in the air. We expect the Rams’ backfield to be similarly inefficient against a continually improving Seattle run defense, so Akers is unlikely to be receiving the game ball in this time (see video below).

James Conner, RB, Pittsburgh Steelers: Conner has refused to contribute to the team in any meaningful way since Week Six, only topping five yards a carry once over this stretch (against woeful Jacksonville). He seems to have mentally checked out and his body is breaking down as he’s averaging just three catches and 16.5 yards in the air over this period. Conner’s corpse draws Cleveland for the second straight week, hoping to improve on his nine carries for 37 yards with five receptions for 25 yards. Either way, we recommend avoiding him.

Tom Brady, QB, Tampa Bay Buccaneers: Brady looks like he’s hitting his stride, but really, he’s just been beating up all the wrong teams (Minnesota, Atlanta — twice and Detroit). The old man is good at faking it. Brady faced just four winning teams, averaging 62.65 per cent completion rare, 240 yards, 1.75 touchdowns and 1.75 interceptions. Heading into Wild Card weekend, he has the hardest matchup for any QB, going up against Washington’s second-ranked pass defense in DVOA (allowing an average of just 62.38 per cent completion, 192 passing yards and 81.4 pass rating — all among the top three in the NFL). Brady will get eaten by either the defensive line or secondary. Your choice.

Drew Brees, QB, New Orleans Saints: Outside the now-seemingly mythical connection between him and Thomas, Brees has had a hard time throwing to anyone not named Alvin Kamara. In the nine games before his rib injury, Brees averaged 79 per cent completions to go along with 244 passing yards, two touchdowns and 0.33 interceptions. Since then, he has averaged 62 per cent completion, 249 passing yards, two touchdowns and 0.5 interceptions. The main concern heading into Wild Card weekend is Brees’ health (as always). Keep an eye on that throwing motion.

The Band originally formed in Toronto in 1967, going on to have a legendary career. Their live album, Rock of Ages, was recorded in 1971 and featured several arrangements by the great Allen Toussaint. From this disc comes “Rag Mama Rag,” one of the group’s biggest singles.

By Lucas Chan
This entry was posted on Tuesday, January 5th, 2021 at 8:24 pm and is filed under FOOTBALL, Lucas Chan, Playoffs. You can follow any responses to this entry through the RSS 2.0 feed. Both comments and pings are currently closed.