Can the Finals Live Up to the Semis? 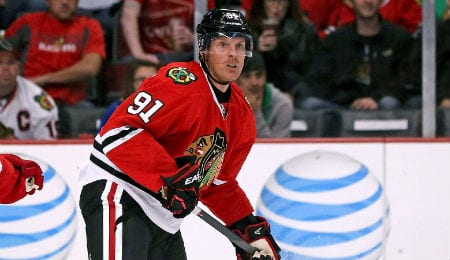 Chicago’s wealth of experience includes Brad Richards — the only man to ever go 8-0 in Game Sevens. (Letsgohawks.net)

After both the Eastern Conference and Western Conference Finals each went the distance, both providing unpredictable and rollercoaster plot twists, how can the Stanley Cup Finals between the Chicago Blackhawks and Tampa Bay Lightning (starting on Wednesday in Tampa Bay) possibly follow those acts?

For our readers that enjoy wagering on such events, here are the Betfair Ice Hockey prices.

There are so many different angles to look at when assessing this upcoming series (see schedule here).

For starters, Lightning goaltender Ben Bishop, who was struggling as recently as late-March, put an exclamation point on Tampa Bay’s win by shutting out the Rangers in a 22-save performance in Game Seven. He looked so shaky the game before, but then bounced back with a brilliant effort to hand the Rangers their first ever Game Seven loss at Madison Square Garden. This is a goalie that is clearly loved by his fans (see video below).

Chicago captain Jonathan Toews always gets mentioned when discussing the best players in the game, but you don’t always appreciate or notice what he does unless you get to watch him on a daily basis.

However, his effort against the Ducks — including another two-goal performance in Game Seven — was the stuff legends are made of. As the Hawks won three of the last four games to win the series, Toews stepped up with five goals, one assist and a +4 rating. Captain Clutch is now averaging better than a point per game in the playoffs.

For the Lightning, watching the maturation process for all their young talent has been amazing. For instance, take centre Alex Killhorn, a player we recommended on the waiver wire in March. He wound up seeing more ice time in March and responding with better production. But nothing he did then could have prepared us for the playoff performance he’s delivered so far.

After potting the game-winning goal in Game Seven, Killhorn is now sixth in the NHL in playoff goals and has 16 points in 20 games with a + 4 rating.

For the Hawks, Patrick Kane continued to make the playoffs his own personal showcase, recording a goal and four assists over the final two games to reach 20 points total in this year’s postseason — second best in the league. That’s 111 points in 110 career playoff games for Kane, who — shockingly — is still just 26.

That’s the thing about the Hawks. You get the sense given how much they’ve accomplished — five trips to the Western Conference Finals in the past seven years and three times in the Stanley Cup Finals over the last six — that this is a very veteran group. But with an average age of just 28.9, there is plenty of youth on Chicago.

Tampa Bay, at 26.4 average age, is truly one of the league’s younger squads. While this team lacks postseason experience, it’s simply jammed packed with talented kids. While that lack of experience has not stopped the Lightning from running the table against more seasoned Eastern Conference clubs like Montreal and the Rangers, you can’t help but wonder how big a factor it will be against the Blackhawks.

Chicago is laden with young talent and experienced vets alike. Guys like 35-year-old Brad Richards, who has now played in eight career Game Sevens — and has never been on the losing end of a single of those games. He’s the only player in NHL history to accomplish that.

After a slow first couple of rounds, Richards really turned it on in the Western Conference Finals, potting one goal with six assists, showing that he still has a little something-something to offer offensively.

Each time the Hawks have made it this far in their current run, they’ve come away with a title. For Tampa Bay, this marks its first trip to the Finals since it won its only Stanley Cup in 2004, and no one remains active from that squad (although, ironically, Richards was on that team).

It is that championship experience, we believe, that will carry Chicago to another Cup win, likely in six games.

Now it’s your turn. Let us know in the comments below what you expect to happen in the 2014-15 Stanley Cup Finals.

By RotoRob
Tags: Stanley Cup, Stanley Cup Finals
This entry was posted on Tuesday, June 2nd, 2015 at 2:42 pm and is filed under HOCKEY, Playoffs, RotoRob. You can follow any responses to this entry through the RSS 2.0 feed. Both comments and pings are currently closed.