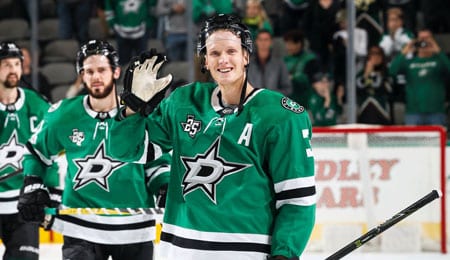 John Klingberg (right) played the hero in Game Six for the Stars. (Twitter.com)

What can we expect from this surprising Western Conference second round matchup, starting on Thursday?

For starters, these are two very similar — and very well-matched teams. It’s hard to envision a scenario in which this series doesn’t remain very tight and last six, if not the full seven games.

Both extremely tough defensive clubs (Dallas ranked second in the NHL this season), each of them really turned things on in the second half to force their way into the playoffs. In fact, over the final 33 games, no teams gave up fewer goals at 5-on-5 than the Stars (46) and Blues (47). Goals could be a premium in this series.

The Stars needed overtime on Monday, but it was fantastic to see them finally clinch a playoff round at home for the first time in 11 years. Their fans have lived through plenty of frustration in recent years, so this was a great payoff.

Defenseman John Klingberg was the overtime hero on Monday (see the video below for the goal, given the Pavarotti treatment for dramatic effect!), capping a brilliant series in which he added five assists and went +5. Injuries cost him 18 games this season, yet he still reached double digit goals for the fourth time in his five-year career.

Alexander Radulov also shone in this series, setting up the overtime winner as part of a six-point, +7 series, as he came back to haunt him old club. Coming off a career-high 29 goals and +22 rating in just 70 games, his performance will be vital to Dallas’ chances against the Blues.

For the Blues, the oft-injured Jaden Schwartz really struggled this season, managing just 11 goals and 25 assists for 36 points, despite staying healthier and playing in more games (69). The right winger took a -6 after going +15 last season, and at one point, he went 22 games without a goal. Yet, Schwartz stepped up when it counted, scoring four goals — including all three in the series clincher on Saturday — with an assist over the six game series. He’s scored the last four goals for St. Louis.

Brayden Schenn was shut out in the first four games of the series, but then came alive as the Blues won the final two games, scoring once and adding two assists. After posting a career effort in 2017-18 in his St. Louis debut, he slipped to 54 points this season, and really — other than 2011-12, he has generally struggled in the playoffs. If Schenn heats up and gives the Blues yet another weapon, Dallas is going to be in trouble.

Dallas showed tremendous ability to come back, giving up the first goal four times against the Predators, yet going 3-1 in those games. And while both teams proved they can win on the road, the fact that the Blues swept the Jets in Winnipeg was truly mind blowing. As a result, we believe St. Louis has the slight edge here, especially if Schenn and Schwartz continue to produce and provide secondary scoring.

British singer-songwriter Marianne Faithfull has been creating music since 1964. Her eighth album, Dangerous Acquaintances, was released in 1981, and the final track on the album “Truth, Bitter Truth” is among her melancholy classics. It was produced by Mark Miller Mundy, who also worked with Steve Winwood.

Now it’s your turn. Let us know in the comments below what your prediction is for this series.

By RotoRob
This entry was posted on Thursday, April 25th, 2019 at 12:00 pm and is filed under Game Preview, HOCKEY, Playoffs, RotoRob. You can follow any responses to this entry through the RSS 2.0 feed. You can skip to the end and leave a response. Pinging is currently not allowed.