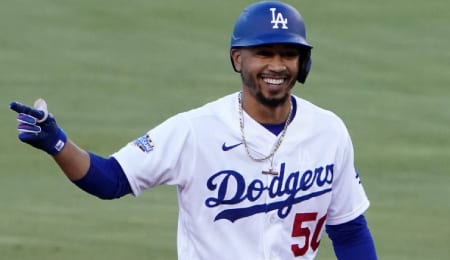 Since winning the World Series in 1988, the Los Angeles Dodgers have returned to the postseason 14 times, including each of the last eight seasons, finally taking home the game’s most coveted prize again on Tuesday.

Long-gone stars like Adrian Gonzalez, Matt Kemp and Yasiel Puig drove many of those teams in the early stages of this current run, but now the offense is sparked by newcomer Mookie Betts (who brought experience and leadership to this team — see video below) and holdovers like Corey Seager and Chris Taylor. On the pitching side of things, Clayton Kershaw remained the team’s most valuable hurler this year, followed by youngsters Dustin May and Tony Gonsolin.

But it was ultimately both hitting and pitching depth that allowed this squad to finally achieve the big prize.

The story of Game Six had to be Tampa Bay Manager Kevin Cash‘s seemingly quick hook of starter Blake Snell, who had pretty much dominated the Dodgers for 5 1/3 IP to that point. But as soon as Snell served up a one-hit hit to Austin Barnes, Cash called on the Rays bullpen.

Yes, we get that Snell — who got a late start to the season because of elbow soreness in the spring — was babied all year, and hadn’t pitched more than six innings in any start since July 2019. But this was no regular outing; Tampa Bay’s season was on the line and there was no tomorrow if it lost. So why not let Snell work a bit deeper into the game?

That was the clear turning point as the Dodgers jumped all over Nick Anderson and then finished things off against Pete Fairbacks.

Cash’s knee-jerk move to the bullpen will be questioned all offseason.

In 2016, Cash ranked 19th among the longest tenured managers with their current team. That was fewer than four years ago; today, Cash is the third behind only Bob Melvin (Oakland) and Terry Francona (Cleveland).

Despite guiding the Rays to the best record in the AL, the team’s highest winning percentage ever and their first trip to the World Series since 2008, Cash’s position could be in jeopardy after this blunder.

Sir Elton Hercules John has been performing since 1962 without taking any time off. In 1975, he released his 10th album, Rock of the Westies. From this, the second single was “Grow Some Funk of Your Own,” featuring the B-Side “I Feel Like a Bullet (From the Gun of Robert Ford),” a tune which reached No. 14 on the U.S. Billboard Hot 100.

By RotoRob
This entry was posted on Saturday, October 31st, 2020 at 3:03 pm and is filed under BASEBALL, MLB Today, Playoffs, RotoRob, World Series. You can follow any responses to this entry through the RSS 2.0 feed. Both comments and pings are currently closed.