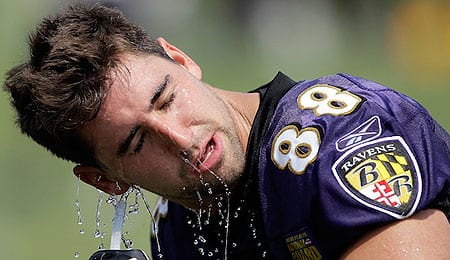 We’re back today, with a few tweaks to the 2013 RotoRob NFL Draft Kit. Specifically, we offer up — via video! — some tweaks to both our tight end rankings and quarterback rankings.

So while you wonder whether Antonio Smith’s appeal should have been successful, feast your eyes on tight end and quarterback sliders.

There have been lots of changes since we released our Top 20 in late-June. Ninth-ranked Dennis Pitta is done for the year, so he’s off the list. Bye bye. Dustin Keller — gone for the year. See ya! With those dudes and others dropping from the list, newcomers like Philadelphia’s James Casey make their way onto the rankings. Check out all of Josh’s changes at tight end in the this video…

There hasn’t been quite as much shifting in the quarterback rankings, which isn’t surprising given that we launched those more recently (in mid-July). Pivots were shifting around include Joe Flacco and Colin Kaepernick both slipping, while our love grows daily for Andy Dalton of the Cincinnati Bengals.

You start 12 players and your roster must consist of one or two quarterbacks, three to five runnings backs, four to six wide receivers and two to four tight ends. There were no kickers or defenses allowed because we experts love to dig deep into the depth charts that truly matter.

Every year there are players that go undrafted, that rise from practice squad minion to favoured zealot. Some of the players here you know and some even caught us by surprise. We do realize there are still many drafts to take place and you are probably gathering a handful of names as potential sleepers. The players we discuss here did not appear on our cheat sheets for many different reasons. So as a sort of addendum to our cheat sheets, we give you our top 10 deer sleepers (plus a bonus one for good measure, because we’re kind that way).