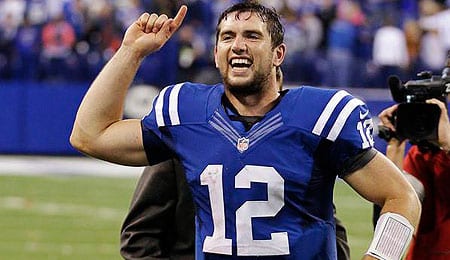 Andrew Luck has plenty to learn, but what a start he’s had to his career.

The 2013 RotoRob NFL Draft Kit takes another step forward today with the release of a new cheat sheet. So while Josh Brent becomes the latest NFL player to get into legal trouble, let’s review the top 20 quarterbacks in Fantasy football for 2013.

Quarterback has been called the most important position in all of sports. Yet, it doesn’t take superior athletic ability to be a successful one. You must be a leader first and a patient one at that. Footwork and throwing accuracy are two skills that must be mastered. Former Iowa Barnstormer/bagboy Kurt Warner was maybe one of the slowest, yet most successful examples the NFL has ever had. Even with four receivers split wide, Warner made things happen. He got his bell rung a couple times a game, but he still became a Super Bowl MVP and two-time league MVP.

When your league drafts, San Francisco QB Colin Kaepernick will be invading frontal lobes as the first round comes to close. Aaron Rodgers, Drew Brees, and Tom Brady, possibly even Cam Newton will already be gone. You know Adrian Peterson and Calvin Johnson will be scooped up as well. Kaepernick starts to erode your sensible plan and then you crack open beer number two before beer one is even finished.

Stop. We said stop! Splash some water on your face and draft the other Super Bowl QB. You know the guy that won the darn game? Kaepernick is cool in Round Four or Five. Round Two is not the time to gamble. Okay so drafting Joe Flacco in the second is maybe too high. After all, the Manning brothers are still afloat and the likes of Matt Ryan, Russell Wilson and Andrew Luck will still be bobbing on the rational circus-like surface.

Please just remember before taking the sexy Colin look for regular Joe. Kaepernick, like all QBs, is just one cutback away from whiplash or a knee thrash. Flacco, on the other hand, realizes his Rice filled pocket is comfortable.

The NFL is evolving into a Quarterback league again. Running backs are awesome and they keep front sevens honest. But, the forward pass kicks the halfback dive in its two-yard gaining butt.

1. Aaron Rodgers, Green Bay Packers: No surprise here. Rodgers is still peaking on a monstrous mountain. He won’t be 30 until December and his best football could still be ahead of him. He raises the standard of any game. If you have been burned by poor QB play in your Fantasy yesteryear, take Rodgers as early as pick number two. In case you’ve somehow forgotten what he’s done in the past year, the video below will refresh your memory.

2. Drew Brees, New Orleans Saints: Don’t forget about or ever give up on the Saints while Brees is under centre. They had issues last season, but you can bet the farm that Brees has been glued to game film ever since. He has many weapons at his disposal and he knows how to spread things around and keep defenses on their toes.

3. Tom Brady, New England Patriots: Every year, Brady has his skeptics and every year he answers with an elite Fantasy performance. What makes him so good is he elevates the talent around him. Exhibit A: remember Deion Branch in Seattle? Neither do we.

4. Cam Newton, Carolina Panthers: Newton plays with such ferocity, it makes you wonder how he remains so durable. He is a big target, but doesn’t fall easy. Newton is very reminiscent of Earl Campbell when he tucks and runs. He is maturing a passer, but whether or not he brings his teammates up and out mediocrity is still a mystery.

5. Matt Ryan, Atlanta Falcons: Ryan’s career seems eerily similar to that of Peyton Manning. They are both highly successful QBs who have issues in big games. That stigma is brutally unfair because neither plays defense. Ryan has Julio Jones, Roddy White and Tony Gonzalez on the field every time he drops back to throw. Need we say any more?

6. Matthew Stafford, Detroit Lions: Stafford has Megatron and a bunch of question marks surrounding him. Still, the mere presence of Johnson makes any QB worth drafting higher than most.

7. Peyton Manning, Denver Broncos: As last season progressed, Manning seemed to slowly wear down. Throws that he rifled in there a couple seasons ago, just fluttered like a butterfly on a brisk morning. Eric Decker, Demaryius Thomas and a little fellow by the name of Wes Welker should see a stronger, more in-tune, albeit aging, Manning this season.

8. Andrew Luck, Indianapolis Colts: Some nerds might gamble and take Luck before Newton. That could prove to be a wise venture. However, Luck is still learning; while Newton was rumbling for first downs last season, Luck was throwing INTs. So until his pregame prep exceeds that of his opposing defense\, Luck will still be viciously mistake prone.

9. Russell Wilson, Seattle Seahawks: Wilson proved to be a jolt of premium fuel in the Seahawk engine as a rookie. The addition of Percy Harvin should be another jolt. Wilson’s maturation process this season will be vital to the future of Seattle football. Look for him to pass for more than the 3,100 yards he did last season and he will probably come close to 500 yards on the ground again as well.

10. Robert Griffin III, Washington Redskins: Griffin produced better numbers than the aforementioned Wilson, nearly across the board. However, RGIII is a major injury risk to say the least and that’s why we place him at 10. Pending his ability to start and finish the season, he could a major weapon.

11. Joe Flacco, Baltimore Ravens: The Ravens are committed to Flacco. He will never be the leader in QB Fantasy points, but you could do worse. Whether you want to believe it or not, Flacco keeps getting better. While he may never be considered elite, he is always consistent with some stellar games mixed in.

12. Colin Kaepernick, San Francisco 49ers: Kaepernick’s good looks and storied season made him a household name. He is not Fantasy gold, however. Kaepernick throws a mean ball and his completion percentage (62.4) was just below Brees and Brady. Bear in mind that Kaepernick has started just 10 games including the playoffs and now he will be without his favourite target, Michael Crabtree, for the majority of the season. Kaepernick did gain Anquan Boldin, and Vernon Davis can split out too. But Kaepernick has yet to show he makes those around him better. If he proves that theory wrong, he can rise up the Fantasy ranks.

13. Tony Romo, Dallas Cowboys: Romo is not quite Michael Vick in terms of turnovers, but he is not that far off. Romo takes a lot of heat because of mistakes, but he does make plays too and he can always find Jason Witten when needed. He shown maturity by being able to overcome his on-field blunders.

14. Eli Manning, New York Giants: Manning is a quality player with two Super Bowl Rings. So why is he below Romo on this list? Simply put, because the Giants’ run is over. They might gut their way into the playoffs, but Manning will take a step back.

15. Matt Schaub, Houston Texans: The Texans always seem to have healthy issues and Schaub has certainly had his. At full strength, they are a Super Bowl calibre team and he has the weaponry and the experience to make it all go.

16. Andy Dalton, Cincinnati Bengals: Dalton is a star in the making and as a result, Cincinnati seems primed for deep playoff runs for years to come. He is a calm leader and his stats are going to continue to rise.

17. Philip Rivers, San Diego Chargers: Rivers has been slowly falling down the Fantasy ranks for years now. His inability to control his emotions during times of on-field adversity has kept the Chargers from becoming a cohesive unit. Still, Rivers has tools, so he can be called upon when your starter has a bad matchup or bye week.

18. Ryan Tannehill, Miami Dolphins: The mist in which post-Dan Marino Dolphin QBs are burdened with is insensitive. Tannehill is a not 5K QB, but he is a warrior and his DNA is not soft or lazy.

19. Ben Roethlisberger, Pittsburgh Steelers: With rings a blinging, Big Ben will now and forever be overrated. Like Eli’s Giants, the Steelers are nearing that rebuild stage. Roethlisberger’s heart is big, but his impact may not be Fantasy worthy. His potential and track record plot him on this list.

20. Jay Cutler, Chicago Bears: Cutler stands a great chance to hurdle his way up our ranks. However, he did “bird dog” his top target, Brandon Marshall, like a 16-year-old boy on the beach. Cutler is emotional in a good and bad way. Newly acquired TE Martellus Bennett and second year WR Alshon Jeffrey must be trusted if Cutler’s stock is going to rise.

This is a deep year for QBs. Notable emissions include Alex Smith (Kansas City), Josh Freeman (Tampa Bay) and the ever controversial Michael Vick. Chances are you know the drafting trend of your league. But don’t get too anxious, as there is talent out there. Carson Palmer in Arizona with Larry Fitzgerald and Sam Bradford (St. Louis) also didn’t crack our list. Do your homework and map out how you can get your guy.

By Josh Johnson
This entry was posted on Friday, July 19th, 2013 at 9:04 am and is filed under 2013 RotoRob NFL Draft Kit, Cheat sheets, FOOTBALL, Josh Johnson. You can follow any responses to this entry through the RSS 2.0 feed. You can skip to the end and leave a response. Pinging is currently not allowed.