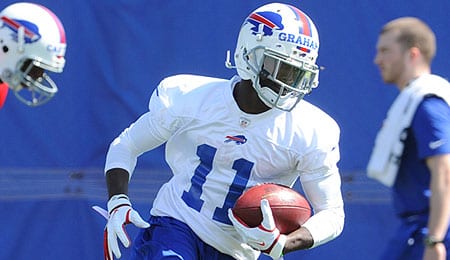 T.J. Graham could emerge depending on how things shake out in Buffalo.

The 2013 RotoRob NFL Draft Kit winds down shortly, but first we have a couple more goodies for you. So while Riley Cooper does a mea culpa for his moronic video, we bring you some deep sleepers to consider.

As season ending injuries begin to mount already, you may find yourself in a tough spot. If you have already drafted, (yes, some dorks already have) you are probably trolling the waiver wire in search of next Wes Welker or Arian Foster. Every year there are players that go undrafted, that rise from practice squad minion to favoured zealot. Some of the players here you know and some even caught us by surprise. We do realize there are still many drafts to take place and you are probably gathering a handful of names as potential sleepers. The players we discuss here did not appear on our cheat sheets for many different reasons. So as a sort of addendum to our cheat sheets, we give you our top 10 deep sleepers (plus a bonus one for good measure, because we’re kind that way).

1. T.J. Graham, WR, Buffalo Bills: There are many question marks in Buffalo. Graham is a second year pro that shows some upside and if injuries or inconsistency strike Steve Johnson or rookie Roberts Woods, it could open a major door for Graham, who managed one TD as a rook (see video below). Graham has mainly been a kick returner but his 4.41 speed could translate nicely in the slot.

2. Julian Edelman, WR, New England Patriots: Edelman and Tom Brady are comfortable with each and that may say it all. You can also bet Edelman knows the offense already.

3. Harry Douglas, WR, Atlanta Falcons: Douglas is the fourth fiddle in a talented receiving orchestra. If Julio Jones or Roddy White gets hurt or can’t get open Douglas can fill the void.

4. Rashad Jennings, RB, Oakland Raiders: Jennings has been plagued by injuries the last two seasons. He is a career backup and although he’s had his health woes, he has not had to deal with the kind of wear-and-tear that everyday backs do. Historically, starter Darren McFadden always a gets hurt. So Jennings and fellow backup Marcel Reece (who was No. 47 in our Running Back Rankings) will certainly see some touches.

5. Kenjon Barner, RB, Carolina Panthers: It doesn’t seem like that long ago that the Panthers were destined to run the wishbone offense. They still could with DeAngelo Williams, Jonathan Stewart and Mike Tolbert in tow. The problem is none of this trio is ever healthy at the same time, which is probably why Barner was drafted in the sixth round in the first place. You may look at the RB pile in Carolina and think there is no way Barner sees the field. You might be right. Or, you may also just turn up your nose at all the Carolina RBs. That’s probably not a bad idea. But, Barner is an explosive talent who ran a 4.39 40-yard dash at the Combine. He is small (5’9″, 190), but more poor health from the group above him could move Barner into a reliable role. He averaged six yards per carry all four years at Oregon and he averaged 135 yards per game as a senior.

6. Kerwynn Williams, RB, Indianapolis Colts: Williams is basically the fifth RB for the Colts. He was taken in the last round of this year’s draft. So, why should you consider Williams for the last round of your Fantasy draft? He will be tested as kicker returner, so his ability to avoid contact will be put to trial. The four RBs ahead of Willams are Ahmad Bradshaw, Vick Ballard, Donald Brown and Delone Carter. Ballard is currently the only fully healthy one of that group. Williams totaled over 3,400 yards as return specialist in college as well as 2,500 yards on the ground and over 800 yards receiving. As a senior he averaged 10.7 yards per carry and 182 per yards game for Utah State of the WAC.

7. Tony Moeaki, TE, Kansas City Chiefs: With veteran Anthony Fasano and rookie Travis Kelce also in camp, Moeki has some work to do. Moeki has proven to a big factor in the past and Coach Andy Reid incorporates the TE into his offense very nicely. Moeki is strong like a TE, but athletic like a WR. Better yet, QB Alex Smith also like to use his TE. As for the competition, Fasano is vet but a backup at best, while Kelce is unpolished and he will have to learn the playbook quickly before he can be trusted. All this means Moeki could go from bye week replacement to Top 10 TE by season’s end.

8. Jarius Wright, WR, Minnesota Vikings: Wright is entering his second season in Minnesota after exhibiting some brief flashes of excitement as rookie. He found the end zone twice and averaged 14.1 yards per catch. Since then, the Vikings took Cordarrelle Patterson in the first round of the draft and signed free agent Greg Jennings, so Wright will have to fight for targets. Wright could be the next Victor Cruz, but more likely the next James Jett.

9. Denard Robinson, RB, Jacksonville Jaguars: When we released our Running Back Rankings, it appeared that Robinson was going to be listed as an OW (offensive weapon). Soon after, it seemed he going to listed as a WR. Had that happened, Robinson would have made an appearance at the bottom of our Wide Receiver Rankings. Officially now he is listed as a running back. He might be relegated to Wildcat and slotback duties, so he could be a nice bye week replacement. Currently, Justin Forsett stands between Robinson and Maurice Jones-Drew, so Robinson will have to prove his worth. Still, Robinson’s role is expected to expand as the season progresses and it does not appear that he will be returning kicks.

10. Riley Cooper, WR, Philadelphia Eagles: As we alluded to in the intro, Cooper’s not the sharpest knife in the drawer, but if our Wide Receiver Rankings were released tomorrow, he would definitely be featured in the tail end of list thanks the Jeremy Maclin knee destruction. Cooper does have company in the Maclin replacement competition as Jason Avant, Arrelious Benn and Damaris Johnson will all battle to flank DeSean Jackson. We believe Cooper will emerge as the starter and that shall vault him from a last round selection to as high as possibly the 10th round in terms of value.

11. Dwayne Harris, WR, Dallas Cowboys: Harris is slated behind Dez Bryant, Miles Austin and rookie Terrance Williams. So Harris needs to take advantage of any opportunity given to him. He is a high energy guy with underrated agility and his 2011 40-yard dash time of 4.53 does not restrict his ability to play the slot. Either Williams (who we ranked 59th) or Harris could make a Kevin Ogletree-like splash this season.

Now it’s your turn. Who’s your favourite deep sleeper this season? Let us know in the comments below.