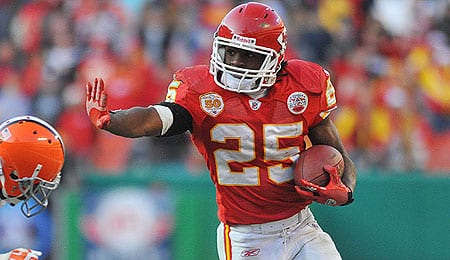 Jamaal Charles has pushed his way into our top five.

Since we launched our Running Back Rankings in late-June, there have been plenty of changes. Ray Rice is dipping, but Jamaal Charles is on the rise.

We just released our Wide Receiver Rankings a couple of weeks ago, but a ton of season-ending injuries have depleted the ranks, causing some shifting in our ordering.

Once again, Josh checks in below with his changes. Included in his sliders is Philadelphia’s Riley Cooper, who is clearly a douchebag, but one the Eagles need given their injuries. Hence his inclusion in the update. And old pro Steve Smith is inching up our rankings as well.