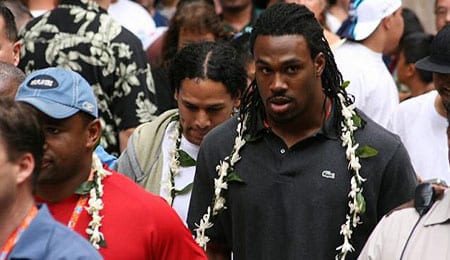 Will Steven Jackson err… get his lei on in Atlanta?

The 2013 RotoRob NFL Draft Kit more or less wraps up today with our final Top 10 list. While we may offer some more updated rankings, the meat of this year’s kit is now finito, so we hope you’ve enjoyed it and will go forth and kick ass in your respective leagues. So while you Tom Brady owners breathe a sigh of relief, let’s examine the top 10 busts.

1. Adrian Peterson, RB, Minnesota Vikings: Peterson is going to be burdened with being the number one selection in almost every draft no matter the format. To paraphrase, those are heavy boots to carry. Injuries can make anybody a bust. We know that’s fair but we as Fantasy dorks expect our first round picks to perform at the elitist of levels. Speaking of injuries, AP has had many and he is another year older. He also runs the risk of not being the top running back, which considering his ADP would basically make him a “bust.” Purple Jesus has set a monumental bar for himself.

2. Steven Jackson, RB, Atlanta Falcons, Jackson is entering his mid-30s and he has to learn a new offense (which he worked hard at this summer, as you can see in the video below). Now, does that sound a like running back you want to build your Fantasy team around? The Falcons also the have diminutive Jacquizz Rodgers who knows the scheme and could be leaned on more with Grandpa Jackson not getting any younger.

3. Peyton Manning, QB, Denver Broncos: Manning wore down as the season progressed a year ago. He now appears to be healthier but that cold, thin Denver air can be hard on someone his age. Manning does have three fabulous receivers now, but we think that is causing his ADP to rise too much. Don’t get entranced by the Manning name too early. Guys like Andy Dalton and Ryan Tannehill could end up producing very similar numbers.

4. Stevan Ridley, RB, New England Patriots: With the Shane Vereen train gaining momentum, Ridley’s chances at repeating a 1,000-yard season could be in serious jeopardy. The Pats made it work for Ridley even with super backup Danny Woodhead last season but Vereen presents more upside. Another concern is that under the Bill Belichick regime they have shown no allegiance to any one back.

5. Steve Johnson, WR, Buffalo Bills: It was reported sometime after this year’s draft that Johnson had a broken vertebrae. Whether he is fully recovered or not (a hamstring injury has now been added to the litany of heath concerns), would you really want to draft this aging has-been at all? Johnson’s role may be to mentor the young corps of Bills receivers and that is not a Fantasy stat.

6. Maurice Jones-Drew, RB, Jacksonville Jaguars: As per usual, the fate of Jags offense lays squarely on Jones-Drew’s shoulders. However, MJD is not an elite back anymore. He’s another year older and another step slower. Worse yet, the Jags finally have some quality receivers and that could shift their focus to the passing game if Jones-Drew falters.

7. Tony Romo, QB, Dallas Cowboys: Romo had a cyst removed from his back this offseason. That news never left our brains and he dropped in our Quarterback Rankings as a result. Romo is a hardworking veteran but back scars don’t heal fast especially when Eagles, Giants and Redskins share the same field. We do realize nobody should be taking Romo before Round Five, but there is always that sense of optimism surrounding second tier quarterbacks and that can be a blinding light. We’re here to make sure that blindness is temporary and you stay on track.

8. Rob Gronkowski, TE, New England Patriots : In a perfect world Gronk should catch 15 TDs annually. Unfortunately, he has not shown interest in working towards such goals. Has he brainwashed the Fantasy world with that one tremendous season? Can he stay healthy and effective for whole season? Some will say the Pats need him to do so, but we disagree. QB Tom Brady can make a star out of just about anybody who is willing. So, if Gronk misses time or can’t get open, Brady will shift his focus to those that are open.

9. Russell Wilson, QB, Seattle Seahawks: As a rookie, Wilson looked as poised as a 10-year veteran. Can he repeat those numbers? Many experts are going all in on this guy early in drafts. Some are even taking him above Brady and Matthew Stafford. Hey, Wilson is a good QB with a lot of tools, but until he elevates his game to elite status for multiple seasons we suggest waiting until Round Five before pulling the trigger on him.

10. Colin Kaepernick, QB, San Francisco 49ers: Kaepernick is a ridiculously overvalued QB. He invigorated San Francisco last season and took the 49ers to the Super Bowl. Now, the whole of the NFL has had a chance to break down his game on video. Kaepernick is going to be tested for a whole season and now there is no Alex Smith to fall back on. Kaepernick will have to make adjustments to keep defenses from squashing him. Losing his top target Michael Crabtree is also very concerning. We don’t think Kaepernick will be terrible, but taking him higher than Round Six seems absurd. That’s why he made this list. Yes, Kaepernick can be a Fantasy starter, but don’t expect Drew Brees– or Aaron Rodgers-like numbers.

By Josh Johnson
Tags: Tom Brady
This entry was posted on Saturday, August 17th, 2013 at 12:35 pm and is filed under 2013 RotoRob NFL Draft Kit, Busts, FOOTBALL, Josh Johnson. You can follow any responses to this entry through the RSS 2.0 feed. Both comments and pings are currently closed.