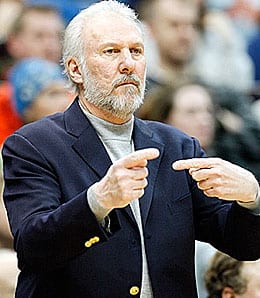 Gregg Popovich may monitor his stars’ PT more than ever this season.

After a break of a couple of days, the 2009-10 RotoRob NBA Draft Kit is back with another team preview as we near the finish line for these puppies. While Shawn Marion deals with a calf injury in Dallas, let’s check in on one of the other Texas teams, the San Antonio Spurs, who will look to reverse a trend of three straight seasons of declining win totals.

The regular season was pretty much business as usual for the Spurs, who won better than 64 per cent of their games and reached the playoffs for the 12th consecutive time. However, injuries left Manu Ginobili unable to play in the postseason, and without his slashing offense the team succumbed to a first-round exit for only the second time in Gregg Popovich’s 12 full seasons at the helm.

With the window closing on Tim Duncan and the club as a whole getting a bit long in the tooth, GM R.C. Buford bundled a handful of expiring deals to acquire former All-Star forward Richard Jefferson from Milwaukee. RJ upgrades the team’s offense while also giving the Spurs a much needed injection of relative youth, though age and health will remain concerns as Jefferson (29) and Tony Parker (27) are the only core players under 30.

In addition to Jefferson, the Spurs also signed Antonio McDyess, who is an excellent under-the-radar pick up. The veteran not only adds rebounding and low-post toughness, he should complement Duncan’s skills nicely on offense since McDyess’ game is the midrange jump shot. Theo Ratliff was brought on board to help combat the Los Angeles Lakers’ size in the frontcourt, and even at 34 he’s still a capable shot blocker. Rounding out their additions up front is DeJuan Blair, who is widely considered to be the steal of this year’s draft. That threesome should provide Duncan with a lot more help in the post than last season’s group of stiffs could muster.

San Antonio is a virtual lock to rattle off 50-plus wins and be a top-three seed in the West. However, with the amount of mileage on its stars’ legs, it will be fighting an uphill battle in 2009-10. Of course, Duncan, Popovich and everyone else with the Spurs understand they only have so many years left to contend for a title with Duncan as the centrepiece. Expect an inspired effort from them come playoff time and a possible showdown in the Western Conference Finals with the Lakers.

The Spurs are pretty well established in terms of roles, though when Ginobili is healthy you could see some jostling for minutes between Finley and Mason. However, we fully expect Popovich to rest his veterans (including Finley) whenever possible in an effort to keep them relatively fresh for April.

Hampered by knee injuries, Duncan posted some of the lowest totals of his career. Of course, when you’re talking about one of the greatest players in NBA history, those lows were still 19.3 points, 10.7 rebounds and 3.5 assists per game. Given that Duncan is 33, the team will probably be even more judicious with his minutes in 2009-10, but he should still be a walking double-double and the presence of McDyess might help save some wear and tear for the stretch run.

The Spurs couldn’t get the job done without Ginobili last year, which is why we anticipate they’ll handle him with kid gloves this season. The addition of Jefferson (and to a lesser extent McDyess) helps spread the scoring load, and it’s hard to imagine Ginobili playing much more than the 26.8 minutes per game he logged in 2008-09. Those banking on a bounce back year from Ginobili are likely to be disappointed as Popovich wants to save Manu’s troublesome ankles for the playoffs.

George Hill didn’t get to play a ton as a rookie, but he did a solid enough job when he was on the court to be part of the Spurs’ rotation this season. He will be the primary backup to Parker and should also see some burn at off guard. With so many names in the mix you can’t expect a lot from Hill when everyone’s healthy. When they aren’t though, Hill might be a name to know.

Blair is a banger down low and only lasted until the second round because of concerns about his height and his knees. He is NBA ready, though, and he should spell Duncan and McDyess for 15-20 minutes a night. That won’t be enough to produce much more than around six points and five boards per contest, but he’d be worth a look if those minutes jumped.

The big story in San Antonio is how Popovich distributes his minutes in an effort to keep his best veterans fresh for the postseason. It wouldn’t be shocking to see statistical declines from all four of the Spurs’ top players (Duncan, Ginobili, Parker and Jefferson), which would obviously hurt their value.

After their shocking finish atop the Southwest Division in 2007-08, the New Orleans Hornets took a rather pronounced step backward last season. While the team’s 49 wins was respectable enough, it was good for only fourth in the Southwest – and the 4-1 thrashing the Hornets suffered in the first round of the playoffs left a bitter taste indeed in the mouths of hoops fans all over the Big Easy. Even a cup of the Café Du Monde’s finest Joe couldn’t wash away the 58-point home-court drubbing the Denver Nuggets laid on the Hornets in Game Four of their series.

Detroit barely made the playoffs and was quickly eliminated.

The Charlotte Bobcats are committed to instituting a running game this season in the hopes of jump starting what was the NBA’s worst offense last season. The question is, will the minor personnel changes they made this offseason be enough to affect legitimate improvement in this club? Sorry to say, but I believe the answer is no. Expecting the Bobcats to finally reach the postseason this season for the first time in franchise history is a fool’s bet. It’s not impossible – this is the Eastern Conference after all – but it’s going to take a crapload of good luck.