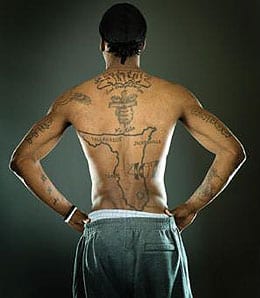 The well-inked Marquis Daniels will try to leave his mark off the Celtic bench.

The 2009-10 RotoRob NBA Draft Kit is back with yet another team preview. While Cleveland’s sports heroes slug it out amongst themselves, let’s take a look at the Boston Celtics, who will look to bounce back and return to the NBA Finals for the second time in three seasons.

Most of the team is back, with the exception of Leon Powe, Mikki Moore and Stephon Marbury (plus a couple of bit players). Marquis Daniels has joined the team and should provide a breather for Ray Allen and Paul Pierce when needed. Kevin Garnett is another year older and coming off another injury, but I am not one of the haters.

Kendrick Perkins will have to share minutes with newcomer Rasheed Wallace, but that just means there is more depth in a title run. Tony Allen will do the same job as Daniels, and Eddie House treats every game like a 3-point contest. Glen Davis can score some points, but he needs to work on his inside game this season. Doc Rivers has the team that could win it all this year if they don’t get bitten by the injury bug.

Perkins is going to have to muster all his skills to hold off Wallace from starting at centre. Sheed isn’t what he once was and he can’t better Perkins at rebounding or shot blocking, but he brings toughness and a sweet shot to the table. In the end I think Perkins will start and Wallace will play a big role off the bench, so draft accordingly.

Uh, the Boston Celtics! The team is filled with them, so picking just one is next to impossible. Many are predicting a decline from Garnett and Allen this year, but I think that is not the case. Allen will put up plenty of threes as he always does and Garnett is hungry to win another title. I think Garnett is a comeback stud that many people will let slip further than he should.

I think the addition of Wallace cancels out any value Davis could have had this season. Remember, NBA value isn’t the same thing as Fantasy value and many owners are going to remember Big Baby from last season when KG was out and Davis was looking solid. Garnett is back and the Celtics have added Wallace to the frontcourt.

Daniels did well in Indianapolis when given the chance. He will be the primary guy off the bench when Allen and Pierce need a breather, so he could pad his stats late in the game for Fantasy owners willing to draft him. Don’t expect him to put up starter numbers for your team, but as a utility guy, he could do solid for 14-team leagues.

Lester Hudson is the only rookie, but a reserve role is in store for him. He has a good basketball IQ and a solid shot, but Rondo and House are in front of him on the depth chart.

The biggest question for me is will The Big Ticket be the same? Is Garnett on the decline or does he have some gas left in the tank? Can Wallace be a force off the bench or will hitting 35 be the end of his Fantasy use? Does this team have enough left to beat out younger teams like Cleveland and Orlando?

Rojan Rondo: Rondo showed last season that he can be the captain of the Celtic ship as he averaged 11.9 points, 8.2 assists, 5.2 rebounds and 1.9 steals per game. Word is the team is working on a contract extension with him, so perhaps when the deal is done his attention can be all on the game. I could see taking Rondo in the fourth or fifth round, right after Derrick Rose and Monta Ellis.

Ray Allen: Allen is entering the final year of his contract, so there is added incentive for him to continue with his 18 points a night and 200 3-pointers per season. He turned 34 this summer, but I don’t see any reason to think he can’t put up 17 points, 3 rebounds and 3 assists per game, while nailing around 200 3-pointers this year.

Paul Pierce: Pierce has been a staple in Boston his whole career, but this season he will get some help from veteran Daniels. What that means for The Truth is some much needed rest from time to time, allowing him to hit the fourth quarter with energy left instead of feeling tired and struggling down the stretch. Pierce could easily match his 20 points, 5 rebounds, 3 assists and 1.5 3s per-game from last season and would be worth taking at the end of the third round.

Kevin Garnett: Garnett is still a monster on the court and even though he was hurt last season, he heads into this season looking to win a second title in Boston. He has a lifetime average of 20.2 points, 11.1 rebounds, 1.4 steals and 1.6 blocks a night, but recent injuries and age could mean he finally falls out of the top three to five PFs drafted if owners get too nervous. I see a lot of sites telling people to take him in the second or even third round, but I would have to put him in the mid to high second round category myself.

Kendrick Perkins: Perkins will split minutes with Wallace at centre. What that means for Perkins is a dip in stats, thus a lower ADP (average draft position). As a centre, what we want to see most of all is rebounds, blocks, and as many points as they can score…and Perkins does that better than people think. Last season he finished the regular season with 8.1 rebounds, 2.0 blocks and 8.5 points per game, but he punched that up in the playoffs and ended that run with an average of 11.6 rebounds, 11.9 points and 2.6 blocks. I wouldn’t be mad if I had him as my back-up Fantasy centre.

Rasheed Wallace: Wallace isn’t the best rebounder or shot blocker on the floor, but he brings a toughness that is hard to match and depth at centre. Sheed is 35 now and his numbers are on the decline, but he can be a valuable asset to Fantasy owners since quality centres are hard to come by. I would expect to see his minutes go down in Boston, but he is a very good guy to have on your bench. Garnett owners will want to try to also own Wallace if at all possible. Don’t jump too high to take him, but the latter end of the middle rounds sound about right.

Marquis Daniels: Daniels was brought in to fill the defensive stopper role that the team has been missing since losing James Posey. While I envision solid minutes off the bench for him, I don’t see him finding enough shots to make him someone worth targeting on draft day. Remember, Fantasy basketball is all about stats, and defensive players only get you steals and blocks, so their value is somewhat limited. Should an injury occur to Ray Allen or Pierce, Daniels is most likely the fill-in starter, but don’t get him until something happens. Tony Allen and Daniels will more than likely cancel each other out more than they will stand out.

Tony Allen: Tony Allen provides depth off the bench to Ray Allen, but his minutes are limited and his role is uncertain with Daniels in town now. Stay tuned during the preseason to see how Coach Rivers views Tony Allen’s role in relation to Daniels’ role. Tony Allen’s value will be similar to that of Daniels.

Glen Davis: The major concern with him has been his weight, but the Celtics put an incentive in his new contract to keep that under control. Davis has a below-the-rim style of play and the addition of Wallace means his minutes are going to be limited unless someone gets injured. He doesn’t block shots or grab a lot of rebounds, but he can offer points to those in deeper leagues.

Eddie House: Those owners that play in leagues where 3-pointers are counted know who House is. Last season he found the bottom of the net 44 per cent of the time from beyond the arc and I would expect more of the same this season. House is basically a 3-point specialist, but one of the best in the NBA if you need to bulk up on them. If you are looking for a waiver wire 3-point guy, House is your man.

After House, you get into guys that provide solid depth in the NBA, but shouldn’t be counted on for Fantasy production. One of the phrases I preach to people all the time is “NBA value doesn’t equal Fantasy value.” I watched J.R. Giddens play at UNM, but both Bill Walker and Giddens seem to be destined for a bench role or the NBDL. Brian Scalabrine and Shelden Williams are stuck behind Wallace and Davis in the frontcourt.

The Celtics are a team that could very well compete for another league title this season, meaning that any of their top six to seven players are worth playing. Heck, even House is worth playing at the flex spot should your league count threes. The centre situation is one to keep an eye on during training camp, but I expect to see Wallace come off the bench as of right now. Daniels will steal some minutes from Ray Allen and Pierce, but I believe it will help keep them fresh as opposed to cutting into their stats. And remember, if you draft Garnett, handcuff him with Wallace.

By James Morris
This entry was posted on Wednesday, October 7th, 2009 at 11:19 am and is filed under 2009-10 RotoRob NBA Draft Kit, BASKETBALL, James Morris, Team report. You can follow any responses to this entry through the RSS 2.0 feed. You can skip to the end and leave a response. Pinging is currently not allowed.