To wrap up our Awards Gala, we present you with the 2009 RotoRob Hockey Awards. 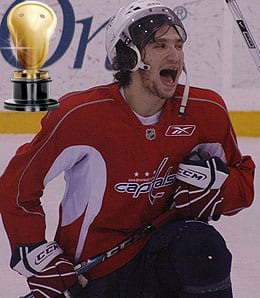 There is no longer any debate about who the biggest star in the NHL is.

Alexander Ovechkin, Washington Capitals: During Ovehckin’s first three years in the NHL, there was a legitimate debate about who was the league’s best player. Sidney Crosby perhaps. Joe Thornton? Evgeni Malkin? But there was no debate in 2009. Whether wowing fans at the All-Star game in Montreal (and not always with his on-ice flair), scoring while flat on the ice or setting up a teammate with the kind of artistry not seen since Mario Lemieux, the swaggering Ovechkin is the No. 1 draw in the NHL and clearly its most exciting player. He’s near the top of the leader board this season despite missing 11 games to injury and dirty play, and will likely win the Hart and Maurice Richard trophies again at year-end, and maybe even the Art Ross, which has oddly eluded him. One trophy the all-kneeing player won’t win is the Lady Byng, given out to the league’s most gentlemanly player. But no one cares about that. 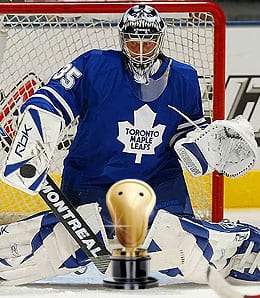 Vesa Toksala’s five-hole is almost big enough to let our award through.

Vesa Toskala, Toronto Maple Leafs: Let’s make it clear that no one but a diehard Maple Leaf fan should have ever willingly picked Toskala in any Fantasy draft, no matter how many rounds your league has. But a half-decent 2007-08 may have convinced some that the Finn would continue his swim upward into a mid-tier starting goalie. Instead, Toskala floundered, ending 2008-09 as perhaps the worst goalie in the NHL. The start of this season has only seen his already-poor stats decline even further. In 19 games this year, Toskala has posted a gaudy GAA of 3.76 and a scintillating save percentage of .869, the worst of any goalie who has played at least 10 games. 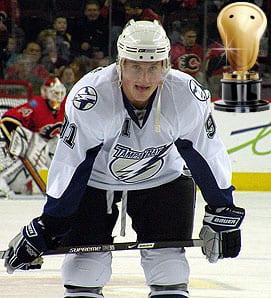 It took a while for him to get going, but Steven Stamkos emerged as the year’s best freshman.

Steven Stamkos, Tampa Bay Lightining: As the No. 1 draft pick of ’08, Stamkos entered the league under huge pressure to return the Tampa Bay Lightning to its winning ways. He didn’t. Indeed, Stamkos was a bit of a bust at the outset of his first NHL campaign. But the centre played up to expectations the rest of the way and has played his way into serious contention for a spot on the Canadian Olympic team. He has scored almost as many goals this season as he did all of last year, cementing his reputation of having a canny knack for finding the back of the net. Without him, the Lightning would be battling the Hurricanes for the rights to the next top draft pick. 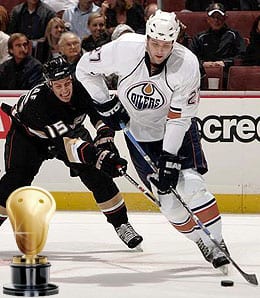 Dustin Penner’s comeback shocked us all.

Dustin Penner, Edmonton Oilers: Look, we all thought the Penner deal was a bust. Admit it. Raise your hands because it is okay. I did too. However, 38 points in 39 games this year signifies a significant comeback — and one no one saw coming even with Craig MacTavish out as Coach. Yes, Penner has gone a bit cold along with the Oilers, but if you predicted this reemergence, well then I would pay you a million dollars…right now. [Note from the editor — RotoRob.com is not responsible for paying off Chris Wassel’s debts.]

Moron of the Year 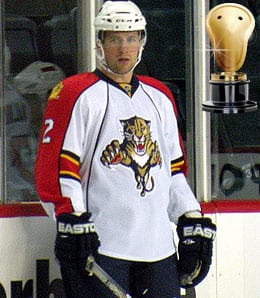 Keith Ballard’s medication ran out shortly after this picture.

Keith Ballard, Florida Panthers: There is little in Ballard’s history to suggest that he is one of the all-time maroons in professional sports. Oh sure, his penalty minute totals indicate he’s not one to shy away from the rougher side of the game, but no one would ever have suspected that he would go postal and slash his own goalie across the head after giving up a goal – a goal, it should be pointed out, that was pretty much all Ballard’s fault. But within minutes of Ballard’s hack job on Tomas Vokoun on November 30, the video evidence of his temporary (?) insanity was splashed all over the web. Thankfully, Vokoun wasn’t seriously injured, but if you watch closely at the end of the video, you can see Ballard give the post a good whack as if disappointed he didn’t completely KO his teammate. — AH

Best Bongo Player of the Year 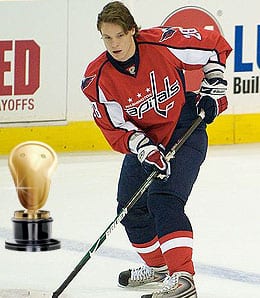 Before 2009 was out off its training wheels, Alexander Semin showed off his rather unique pugilistic abilities, playing a bizarre form of bongo drugs on New York Rangers Marc Staal’s head. I’m not sure what I like better — those flailing arms or that percussive technique — oh, what pure majesty. If you haven’t seen it, you haven’t lived. So do yourself a favour. — RR 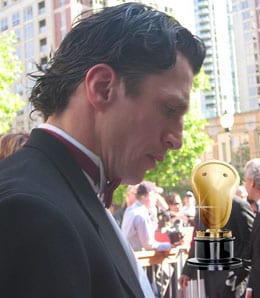 Can you believe +/- dud Rod Brind’Amour is a two-time Selke winner?

This award goes to the player who literally cannot play D worth a crap. Needless to say, it does not have to go to a defenseman necessarily and, sure enough, this year’s recipient is Rod Brind’Amour of the Carolina Hurricanes. If you thought last year’s -31 thru 61 games was bad, take a look at this year’s horror show. In just 38 games, the old iron horse himself is a -22. No, this is not a misprint. Ever since his knee surgery before the 2008-09 season, Brind’amour has not been the same player. Carolina is much worse off this year and a turnaround is really not in the cards. It may be time to retire, ol’ No. 17. — CW 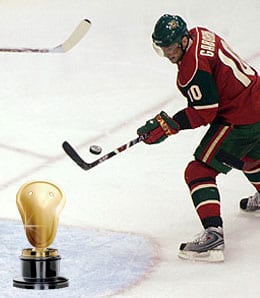 New York loved what it saw of Marian Gaborik in Minny, so it went out and got him.

This award is given to the player who best carries his team on his back. Originally named the Jaromir Jagr award, but there had to be a minor adjustment here since he went to the KHL. This year’s recipient of The Jesus Award is Marian Gaborik. All Gaborik has done is score 26 of his team’s 105 goals. Now, I am not a math major (nor I claim to be one) but that is just about 25 per cent of the team’s total output in the goal department. With busts like Chris Drury, Wade Redden, etc., on the roster, the Rangers have been a true disappointment since their 7-1 start. However, Gaborik continues to lead the way much like Jaromir Jagr did in those dark years. When the spread in goals between first and second on your team is 17, there is a serious issue. Oh, poor Jesus…oops…I mean Gaborik. — CW 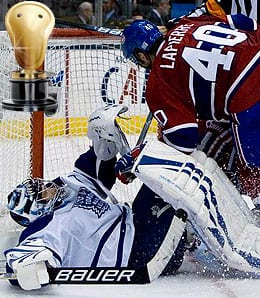 Did Vesa Toskala’s brain turn to marbles when Maxim Lapierre landed on his head or when the RotoRob hardware did? (AP)

This one given to the goalie who I’m confident has marbles for brains. This year, that award goes to Vesa Toskala, whom we’ve already determined is a serious dud (see above). Of course, there’s the classic 200-foot goal he gave up against the Islanders, but this recent one against Buffalo is up there as well. Now, I understand Toronto makes you go criminally insane when you are a netminder, but even Toskala’s numbers this year border on insanity. His Goals Against Average and Save Percentage rank last in the league for anyone who has more than 10 decisions. I understand Toskala’s injury issues and his fear of being hurt again, but the lackluster play literally screams “go to Europe!” Let us hope and pray that the Leafs figure this out before it’s too late. Oh wait…this is Toronto we’re talking about…never mind. — CW 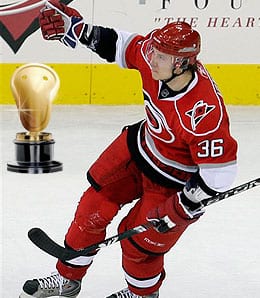 This is my favourite award of all, and this year we give it to Jussi Jokinen. Did you know that Jokinen has a 73 per cent success rate (this calendar year) in shootouts? The former Bolt was truly given a new lease on life when he waived by Tampa and picked up by the Hurricanes. Jokinen is also good very late in games when you need a goal to tie or win a game. Just ask the New Jersey Devils; when Jokinen tied or won the game in three of the seven games in that series. If you want a sharpshooter and time is short, Jokinen is your guy. — CW

Detroit barely made the playoffs and was quickly eliminated.