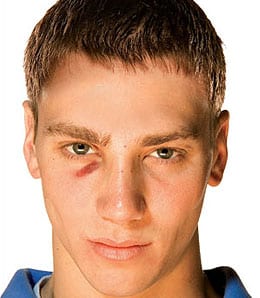 Former Tar Heel star Tyler Hansbrough could get some nice run as a rookie in Indy.

We’re back with another team preview as part of the 2009-10 RotoRob NBA Draft Kit. While Warrior fans bemoan Brandan Wright’s latest shoulder injury, let’s check in on the Indiana Pacers, who need to tighten up their D if they hope to make progress this season.

The Pacers failed to make the playoffs last season and Mike Dunleavy went down with a serious knee injury that threatened his career. The team was able to add Tyler Hansbrough and A.J. Price via the draft, along with Dahntay Jones, Solomon Jones and Earl Watson through free agency. The addition is not without subtraction as Marquis Daniels and Jarrett Jack decided to play elsewhere.

Playing in a conference that features Boston, Cleveland, Orlando, Atlanta, and Miami will test this young team and perhaps push them to grow faster than people think.

There were a few key changes in Indiana this summer, and some will have some interesting Fantasy implications this season. Danny Granger, of course, is becoming a household name for Fantasy owners. If you’re a Fantasy owner who is also a Pacer fan, it is time to love Granger with all your heart. Jack left the Pacers and headed north to Toronto, which means veteran PG Watson should see some solid minutes backing up T.J. Ford, and with the team adding Price to the mix, that means Travis Diener could be looking for minutes near the end of games.

Dahntay Jones will shore up the defense at SG, but Fantasy owners have to be rooting for the club to play Brandon Rush and rotate Jones in the game. Hansbrough will have to battle for minutes, meaning he won’t have any real value unless Troy Murphy gets injured. Solomon Jones is going to battle Roy Hibbert and Jeff Foster for the starting job in the preseason, but I fully expect Hibbert to head into the season as the starter.

Hibbert, Foster and to a lesser extent, Solomon Jones, are going to battle it out to see who starts at centre this season. Hibbert clearly has youth and skills on his side, but foul trouble will keep Foster in the minutes even if Hibbert does win the job. Another battle is at SG where Rush and Dahntay Jones will share minutes. From a Fantasy standpoint, Rush is the man you want because Jones is more akin to Bruce Bowen, and defensive stoppers don’t get Fantasy points.

Granger is the easy call here. I have Granger ranked as the No. 2 overall Fantasy SF right behind LeBron James. Granger does everything from scoring to steals to 3-pointers. I would have no problems whatsoever drafting Granger in the middle or bottom end of the first round. He could even go as high as fourth overall depending on your format.

I think Murphy is going to disappoint a lot of people because of the season he had last year. I don’t honestly think he can match those numbers again and I would look for something more in the range of 13 points, 10 rebounds, and around 130 3-pointers this season. Still, these are not bad stats at all, but nobody is sleeping on him anymore and that means people will grab him a little earlier than they should.

If Rush can hold off Dahntay Jones and get the minutes at SG, he will be a big time sleeper in Indiana this year. With Dunleavy out for who knows how long, Rush could easily take over his role and score upwards of 12-13 points a night and grab 4-5 rebounds to go with a steal and a block here and there.

Hansbrough could become a sixth man for the Pacers with his scoring and rebounding ability off the bench. I think double-double is too lofty, but I wouldn’t be shocked to see 8 points and 6 rebounds a night from him.

The story in Indiana is how Dunleavy’s knee will hold up after surgery. He has proven he can be a viable starting player for almost any Fantasy team, but will he ever be the same after this last injury? When he does return, what will that mean to guys like Rush and Dahntay Jones? Will the Pacers slide Granger over to PF and let Dunleavy play SF for some small ball? Will the Pacers let Hibbert hold down the middle and figure his foul troubles out or will Foster continue to keep him on the bench?

T.J. Ford: Ford has always had the skills to be a starting Fantasy PG, but injuries have plagued him his whole career and jaded many Fantasy owners in the process. With the departure of Jack comes an increase in value for Ford and I would have no problems taking him as my starting PG; just make sure you handcuff him with a good second PG.

Brandon Rush: In 19 starts last season, Rush averaged 15.9 points on 47 per cent shooting, including 41 per cent from beyond the arc. That kind of production would be nice if the Pacers didn’t also have Dunleavy coming back from injury and Dahntay Jones playing the defensive specialist role at SG. Rush’s value is closely tied into Dunleavy’s knee problems, but I think he will start over Dahntay Jones as the season kicks off. Because of their depth at SG, Rush should be looked at as a flex option that can score and hit the three-pointer.

Danny Granger: Here is the crown jewel of the organization, Mr. Handyman. Granger is a legitimate All-Star small forward that should be in the top three when looking at SF Fantasy rankings. With Dunleavy being out, Granger will continue to be a Fantasy beast and I don’t mind taking him right around No. 5 overall. That’s right, I said No. 5 overall.

Troy Murphy: Murphy is a double-double machine, last season averaging 14 points and 11 rebounds, while shooting 45 per cent from 3-point land and 82 per cent from the free-throw line. There are questions about him possibly peaking last season, but since he will qualify at both PF and C, I like him as a starter.

Roy Hibbert: The problem with Hibbert has always been foul trouble, but the kid has a ton of upside. If he can keep his name out of referees’ mouths, I think he can put up double-double stats with multiple blocks per game. I don’t think he is a starting Fantasy centre yet, but if you miss out on the bigger names, Hibbert is a real option. Look at taking him after you see Tyson Chandler or Marc Gasol go.

Tyler Hansbrough: The big kid from the University of North Carolina looked better than expected in the Summer League and it appears as if the Pacers will give him a solid 20-25 minutes a night. Minutes translate into value, so as long as he plays he is worth looking at. Give Hansbrough a peek near the end of the draft.

Dahntay Jones: Jones is an example of NBA value not translating into Fantasy value. He should be all defense when he is in the game, so those comparisons to Bowen might be right on track. Look elsewhere for SG depth in your draft.

Earl Watson: Watson will only have real value if Ford goes down, so he’s a handcuff at best. However, given Ford’s injury history, his owners would be wise to draft Watson just in case.

A. J. Price: Price should not be owned unless Ford goes down and he is to split minutes with Watson.

Mike Dunleavy: With the uncertainty of his knee and how it will hold up under game pressure, Dunleavy should be avoided on draft day. Even when he does return, he will have to battle Rush and Dahntay Jones for minutes.

Solomon Jones: There is talk about him battling Hibbert and Foster for the starting centre job, but that is more likely just a case of competition breeds stronger play. Jones simply doesn’t block enough shots to be considered as a viable starting centre. Pass on him on draft day.

Jeff Foster: The big man that just never seems to go away is back yet again. I will give him praise because he could always snatch 20 rebounds on any given night, but he had 15 or more just twice last season and injuries are wearing him down. Only take Foster if you are looking to shore up rebounds in the final rounds.

In the end, Granger, Ford, Murphy, and possibly Rush are the guys to watch out for in Indiana. Rush could be in a committee role with Dahntay Jones. Feel free to email me with any questions about your Fantasy basketball drafts.

By James Morris
This entry was posted on Monday, October 5th, 2009 at 12:23 pm and is filed under 2009-10 RotoRob NBA Draft Kit, BASKETBALL, James Morris, Team report. You can follow any responses to this entry through the RSS 2.0 feed. You can skip to the end and leave a response. Pinging is currently not allowed.