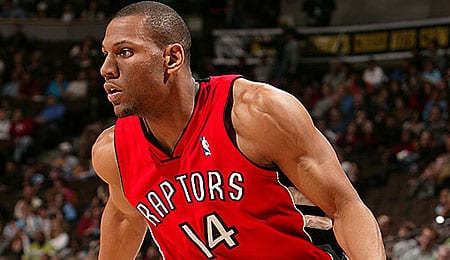 Joey Graham won’t be taking the Nuggets to the Finals, that’s for damn sure.

We’re back with another team preview as the unstoppable beast that is the 2009-10 RotoRob NBA Draft Kit continues to wreak havoc. The news just keeps getting worse for Allen Iverson, who has so much to prove this season. Meanwhile, let’s check in on one of his former teams, as the Nuggets look to build on a very successful 2008-09 campaign.

Last season, the Denver Nuggets tied a team record with 54 wins and were that close to making their first-ever NBA finals, falling just short by losing to the eventual champion L.A. Lakers. So what did they do to put them over the hump—and a formidable hump the Western Conference is? Why, sign Toronto Raptors castoff Joey Graham, of course. Frustratingly athletic and maddeningly inconsistent, Graham leaves fans and coaches scratching their heads one minute, and oohing and aahing the next.

Meanwhile, the Lakers acquired Ron Artest, the San Antonio Spurs picked up Richard Jefferson, the Dallas Mavericks got Shawn Marion and Drew Gooden and the Portland Trail Blazers only signed Andre Miller. Graham? Well, he doesn’t fit in with that caliber of player and he certainly isn’t going to make or break Denver’s season. Instead, the Nuggets are counting on some of their core players improving, namely Nene, Chris “Birdman” Andersen, J.R. Smith and Carmelo Anthony. Call it addition by doing nothing.

The Nuggets let defensive specialist Dahntay Jones go in free agency and shooter Linas Kleiza split for Europe. Jones is the bigger loss and Denver is expecting Arron Afflalo to provide some of that missing grit. But perhaps the team’s biggest move was acquiring University of North Carolina guard Ty Lawson in a draft day trade with the Minnesota Timberwolves. Lawson could be something special and is the heir apparent for Chauncey Billups, who really saved the Nuggets after an early-season trade for Allen Iverson last year.

Denver will be a solid team again, but with its chief rivals all improving, the Nuggets may need another big trade—ideally for a big man—to make it to the top.

Smith will be suspended for the first seven games of the year because he killed a man in a 2007 auto accident. He received a 90-day sentence for that offence this summer and served 24 days in jail. But that’s not the only reason the NBA suspended him: the league also cited his poor driving record. Oh yeah, never mind that he killed a man, he just drives too fast. In his place, Afflalo will start and get a chance to prove he should get the nod when Smith returns. Other than that, there will be some battles for mop-up time by the likes of Balkman, Graham and James White (acquired in a trade with Houston), but nothing that will upset the balance of this team.

The Nuggets were floundering until the team made the steal of the year by swapping A.I. for Billups, who brought in leadership and the knowledge of what it takes to win, something Iverson never had The Answer for. But Anthony is still gold. He averaged 22.8 points, 6.8 rebounds and 3.4 assists last season, but scored 27.2 points per game in the playoffs, hinting at greater things to come.

Nene enjoyed a career year in 2008-09, but do you really believe he’ll be capable of playing in 77 games again? Uh, good luck with that. Draft at your own peril.

If Afflalo is named the starting shooting guard (an unlikely scenario), Smith could still be a real steal. He’s likely to play close to 30 minutes a night whether he starts or not and would be a legitimate Sixth Man of the Year Award candidate again (he was second last year in the voting). Last season, he averaged 15.2 points, 3.7 rebounds and 2.8 assists per game, all career highs for the five-year veteran.

The Nuggets only have one worth keeping an eye on: Lawson, a guard from UNC who was named ACC player of the year. In his junior year, he averaged 16.6 points, 3.0 rebounds and 6.6 assists per game and had a very healthy shooting stroke of 53.2 per cent. His drive-and-penetrate game should make him ideal to spell Billups for now and replace the 34-year-old veteran in a few years.

Denver will likely take on Portland for the Northwest’s top spot, but still haven’t acquired anybody to take on the big men that the league’s other elite teams have. The Nuggets just didn’t have an answer for Pau Gasol in last year’s conference finals and still don’t. That task falls to injury-prone Nene and K-Mart again and neither better get hurt since Johan Petro and Allen don’t exactly instill fear.

The Nuggets also need to find an irritant, someone who gets under the skin of the opposing team—as opposed to the law, something a few of their players are good at. Last year that player was Jones and now that task falls to Afflalo.

Critics say coach George Karl caught lightning in a bottle last year, but the Nuggets do have some great talent and now they know they can win. The question is can they stay healthy and out of jail long enough to win it all?

By Andy Holloway
This entry was posted on Friday, October 9th, 2009 at 1:12 pm and is filed under 2009-10 RotoRob NBA Draft Kit, Andy Holloway, BASKETBALL, Team report. You can follow any responses to this entry through the RSS 2.0 feed. You can leave a response, or trackback from your own site.