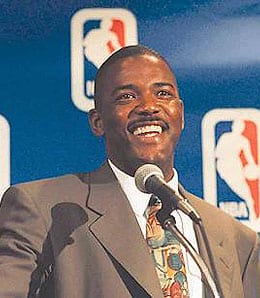 Does GM Joe Dumars really have a plan?

We’re back with more of the 2009-10 RotoRob NBA Draft Kit as we near the end of the team previews. While both Dwyane Wade and Jermaine O’Neal deal with pre-season injury woes for the Heat, let’s check in on one of Miami’s Eastern competitors – the Detroit Pistons, who came crashing down to earth with a big thud last season.

There may have been some grand plan when Joe Dumars traded Chauncey Billups to Denver for Allen Iverson, but it certainly didn’t help last year. Detroit barely made the playoffs and was quickly eliminated. The cap space freed by the trade was then used to sign free agents Ben Gordon and Charlie Villanueva, two high scorers who think defence is a four-letter word. That should make the Pistons interesting to watch if nothing else and a big change from the plodding aging team they were becoming.

The Pistons also signed big men Chris Wilcox and Ben Wallace, which should help clog up the middle at the very least, but also creates a three-way battle for playing time at centre. But the more interesting dilemma for first-year head coach John Kuester is what to do with Gordon. Richard Hamilton did not like coming off the bench when The Answer came to town, and his numbers naturally declined. Rip’s numbers bounced back when Iverson was eventually forced out of the starting five, and A.I. found himself looking elsewhere for employment at season’s end. Veterans Antonio McDyess and Rasheed Wallace have also left.

Gordon is comfortable coming off the bench—he was the NBA’s Sixth Man Award winner in his rookie season—but how he and Hamilton will divide up the time could be key to their production and happiness, especially since Rodney Stuckey will chew up a lot of time at point guard. It seems likely that both players and probably all three will be on the court at the same time, which means the Pistons may be the best thing coming out of Detroit these days—and that’s not high praise. The Pistons will be one of six or seven teams battling for the last two or three playoff spots, but that’s about it.

Hamilton is the starting shooting guard for the moment, but Gordon could take over if Rip doesn’t recover from the sub-par season he had last year when Iverson disrupted his career.

There’s also a nice battle at centre: Kwame Brown is being touted as the starter, but face it, he doesn’t provide much in the way of offence–or defence for that matter. The return of Wallace is intriguing, but he’s not the player he once was (he was leaning towards retirement this summer) and will probably get limited minutes. That leaves newcomer Wilcox, who could supplant Brown with a nice camp, although the Pistons may not need another scoring threat with all the firepower they have at the other positions. Look for all three to get minutes depending on match-ups and the situation.

Finally, PT for guards Chucky Atkins and Bynum could be squeezed as a result of all the team’s Pistons moves. Atkins, coming off two injury-plagued seasons, has a non-guaranteed contract and would seem to be an easy cut unless he can outplay Bynum in the preseason. But if the plan is to have Gordon spell Stuckey, then neither will get significant minutes. Look for Bynum to stick.

The Pistons are Stuckey’s team and he should thrive under coach Kuester, who is noted for his offensive acumen. But newcomer Gordon is getting paid $11 million a year to score and he better score a lot. The Pistons were a plodding team last year, not able to score or even defend particularly well. Nobody averaged 20 points a game and Gordon has that ability, having led the Bulls in scoring four years in a row.

This could easily end up being Gordon depending on how he and Hamilton play together, but here’s betting that Rip fares worse. He’s the only Piston left from the 2003-04 championship team and he still managed to average 18.3 points per game last season even though Iverson disrupted the team and affected Rip’s PT. Hamilton is still likely to start, but there’s potential for his numbers to decline if Gordon becomes the go-to guy. As last season showed, When Hamilton isn’t playing, Hamilton isn’t happy.

Wilcox? Are you kidding me? The same guy who averaged 7.2 points and 4.5 rebounds in a mere 17 minutes with Okalahoma and New York last year? But don’t forget that he put up around 13.5 points and seven rebounds in his last two years in Seattle and could put up similar numbers if he gets decent playing time.

First-round pick Austin Daye is a 6’11” forward out of Gonzaga who can score, although he gives up a lot on the defensive end; thankfully, the Pistons are less concerned about that aspect these days. Two second-rounders, 6’8” DaJuan Summers (Georgetown) and 6’9” Jonas Jerebko (from Sweden), will battle for time at power forward, but neither are expected to get major minutes just yet.

Will Gordon be happy being the sixth man again after establishing he can be a starter? If he starts, will Hamilton be happy? Can these two co-exist? CV is a nice guy who can score in bunches, but he’s never been on a real winning team and he is inconsistent. Now that he’s been rewarded with a five-year, US$35-million contract, can he step up and be consistent? If the kid Daye is all that and a bag of chips, look for Hamilton and Prince to be mentioned in mid-season trade talks, especially if the Pistons are flailing.

By Andy Holloway
This entry was posted on Sunday, October 11th, 2009 at 1:13 am and is filed under 2009-10 RotoRob NBA Draft Kit, Andy Holloway, BASKETBALL, RotoRob. You can follow any responses to this entry through the RSS 2.0 feed. You can leave a response, or trackback from your own site.